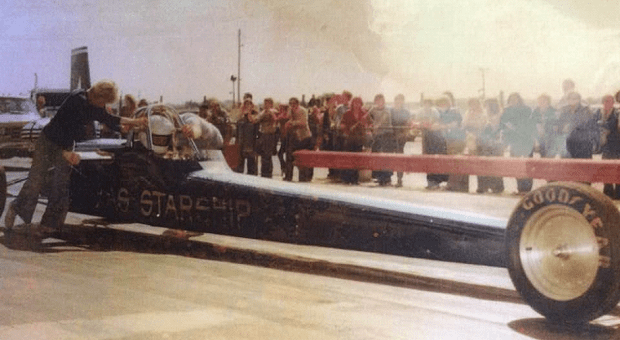 For many of us, the memory of our first car is a cherished one. For most young Americans, it serves as a symbol of freedom and independence, but for many of us it also represents so much more. For those with fuel and oil in our veins, it symbolizes the catalyst that sparked an undying passion for burning rubber, busted knuckles and speed.

If you’ve managed to hold on to your first car after all of these years, consider yourself one of the lucky few. I recently had to sell my beloved 1970 Monte Carlo, which I purchased when I was only 14. I was sad to see her go, but was also lucky enough to meet and befriend a unique figure of automotive and rocket drag racing history in the process.

John Allen Hudson was born in San Antonio, Texas on September 28, 1947 at Brooks Military Hospital. The son of an Air Force veteran, John took an interest in drag racing while attending junior high in San Marcos, Texas. The roads surrounding the Air Force base were flat by default to accommodate the base and its airfield, and made the prefect gathering spot for local drag racers. John made friends with some of these local hooligans and so his passion for the sport began.

John’s first race took place while he was still in high school. At the Double Eagle Drag Strip in San Antonio, he somehow managed to convinced his 30-year airman father to allow him to race the family’s 1962 Chevrolet Biscayne. Slamming through the gears, he lit up the tires just a little bit with the little 6. It was here that John won his first trophy in the Stock 6 class.

As John was facing the normal growing pains of young adulthood, U.S. military forces were facing their own set of challenges just south of China. It was the mid 1960s and the Vietnam War was in full swing, so John, like many young men of that generation, had to set off to serve his country. He served two tours with the 3rd Battalion 4th Marines Lima Company as a corporal squad leader and was wounded three separate time in the line of duty. 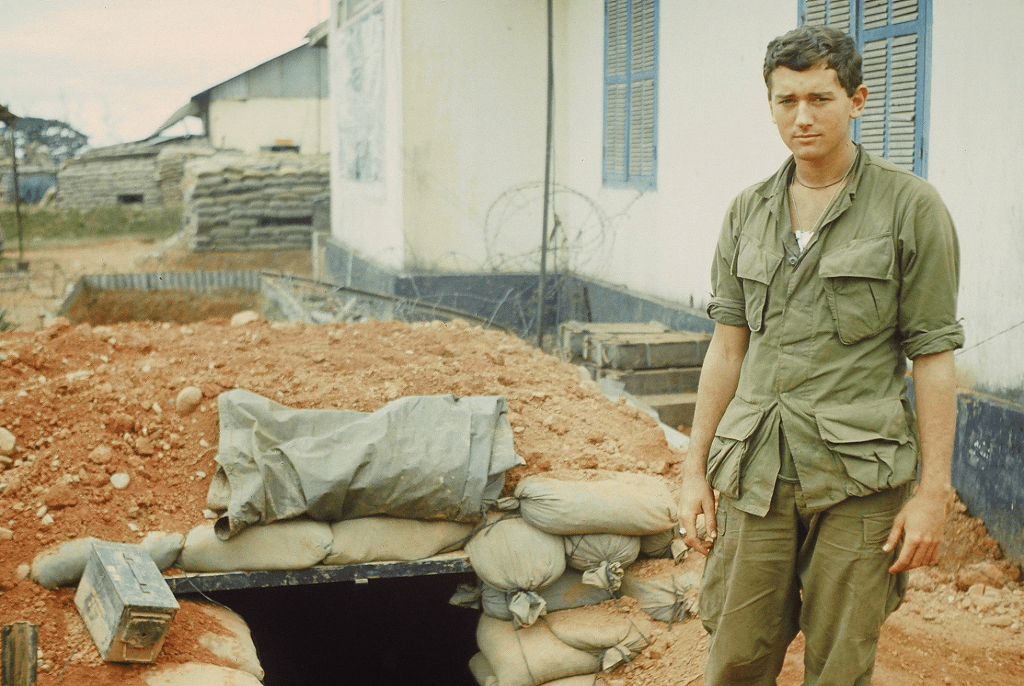 It was during one of his tours, in June of 1968, when he received his first “Hotrod Magazine” featuring Dick Keller’s X1 Rocket Dragster. At that moment, John vowed that if he somehow managed to survive the war, he’d build and race a rocket dragster of his own.

It wasn’t until 1977 that he undertook the creation of his first rocket dragster, “The Texas Starship.” Originally built by Ky Michaelson, the dragster was powered by a 5,000-pound-thrust hydrogen peroxide motor.

One of these rocket motors is pictured below both on and off of its drag car. 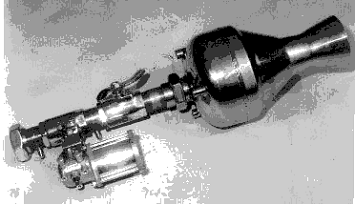 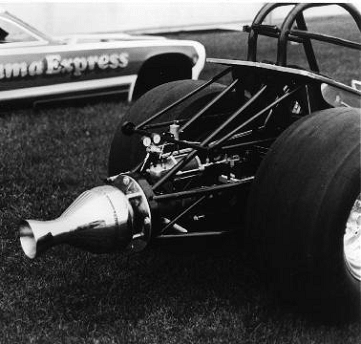 To the many of us who do not have experience with rocket powered automobiles, driving one might seem like a complicated and daunting venture. When asked, John stated, “I will tell you right now: It was the easiest to drive, most reliable and maintenance free drag-race car possible. Once you knew how to make it run correctly (which took Fred Goeske and me a while), it was a dream to drive and operate.”

Below, John is pictured front and center behind the wheel of the “Texas Starship” as he’s guided to the starting line. 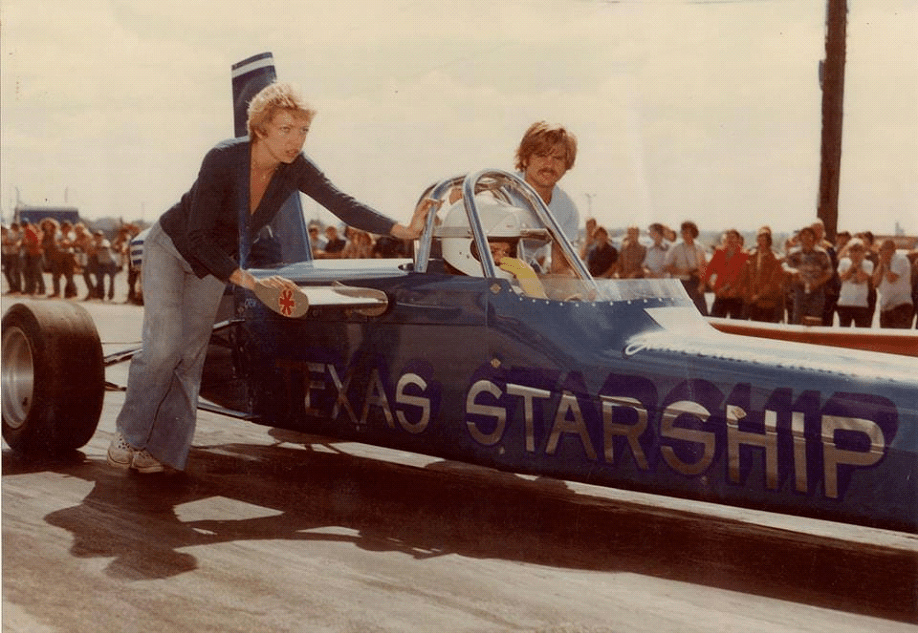 The Texas Starship had a 260-inch wheelbase and weighed 1,000 lbs empty. The fuel tank was pressurized at 500 psi and used approximately 20 gallons per run. John estimates that it took about 1,000 feet for the rocket dragster to eat through all of its fuel – although he tells us, “We did not have 1000-foot clocks on any of the tracks, so I am just guessing where it ran out. As soon as the crushing G-forces ceased, I would hit the chute and it would open just past the lights!”

The Texas Starship had a pair of 80-cubic foot scuba tanks mounted in the nose of the car. While this might sound dangerous to anyone not familiar with rocket dragsters, John assures us that, “If you knew what you were doing (and some operators definitely did not), the cares were safe to run and drive.”

He sold the car to Fred Goeske and it can now be found at the Don Garlits’ Museum in Ocala, Fla.

After selling the Texas Starship, John continued to race Top Fuel dragsters for Fred. He recalls his first race in Orange County; seated behind the wheel of the Chicago Patrol on a damp foggy morning, he was worried about visibility and condensation on the windshield. John tells us that when he voiced this concern, Fred called him a wimp and told him that, “As soon as [he] hit the throttle, the fogging would be gone.”

Should anything go wrong, the danger was compounded by the fact that at this point and time, funny cars had no escape hatch and drivers were actually trapped inside until the dragway was cleared and the crew could lift the body to let them out. Thankfully, Fred was right and when John hit the throttle, the fog was instantaneously sucked out of the car. Away he went!

John had made a promise to himself, committed to a goal and achieved it, but he was far from finished with racing. After selling his first rocket car, he bought and Drove Jim Hodges’ Alabama Express rocket car (pictured below) for two more years. 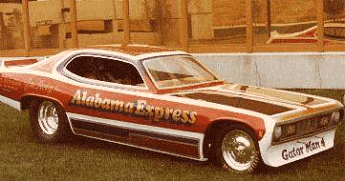 Retired now, John splits his time between his home in California and his getaway in Coppers Cove, Texas, but still enjoys driving and working on classic cars. He currently owns a 1995 Z28 Convertible, a 1965 Cutlass drag car and the latest addition to his collection, a 1970 Chevrolet Monte Carlo.

2 Comments on John Alan Hudson and the Texas Starship