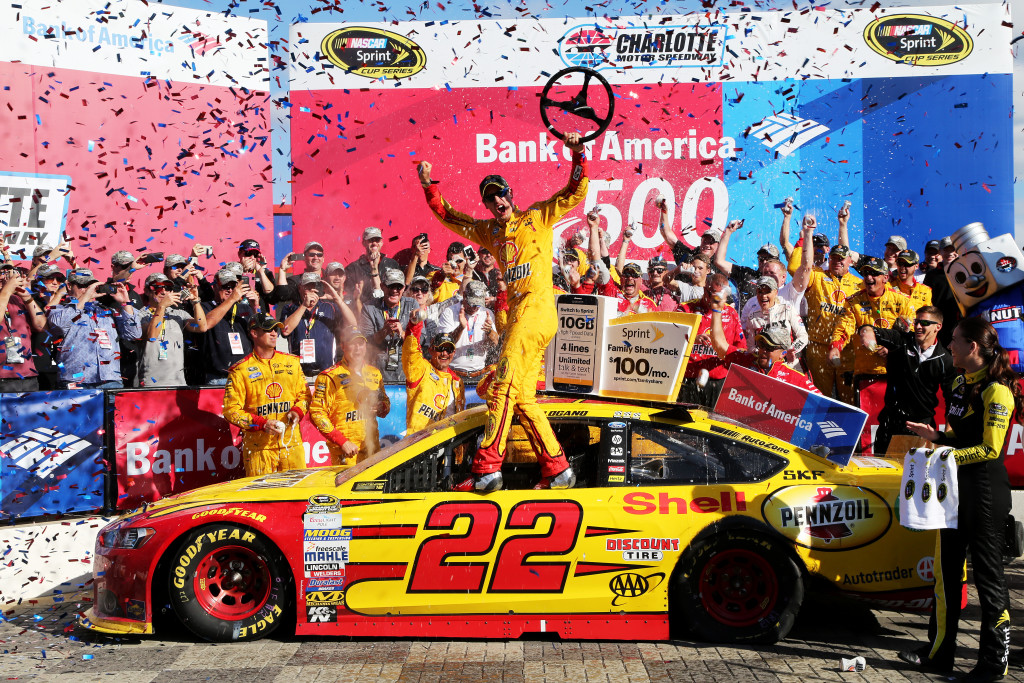 Logano, pushing his Pennzoil Ford to victory lane for the fourth time in 2015, led an incredible 227 circuits at Charlotte in holding off a gritty Kevin Harvick by 0.703 of a second at the finish.  The big bonus for the No. 22 team is getting an automatic pass to the Elite 8 Eliminator Round with Kansas next week and the one track everyone is talking about – Talladega – in two weeks.

“This makes Talladega way easier,” said a relieved Logano.  “I know that’s on everyone’s mind when this round starts, and last year we won Kansas when it was the first race of this round and now we were able to get it this time at Charlotte.  We’ll now be able to get a lot of sleep the next couple of weeks.”

Watching his mirror, Logano knew what Harvick unleashed in Dover last weekend and wondered if he was holding back waiting until the end to make a run.  On this day, Logano was the fastest, keeping Harvick at bay and grabbing his first win at Charlotte Motor Speedway.

“I think everyone saw how fast he [Harvick] was last week and it probably made a lot of people nervous, but our team kept their heads up and stayed confident,” said the 12-time Sprint Cup winner.  “We know we can beat them.  We know we have what we need over here, and our team is as tight-knit as they get. 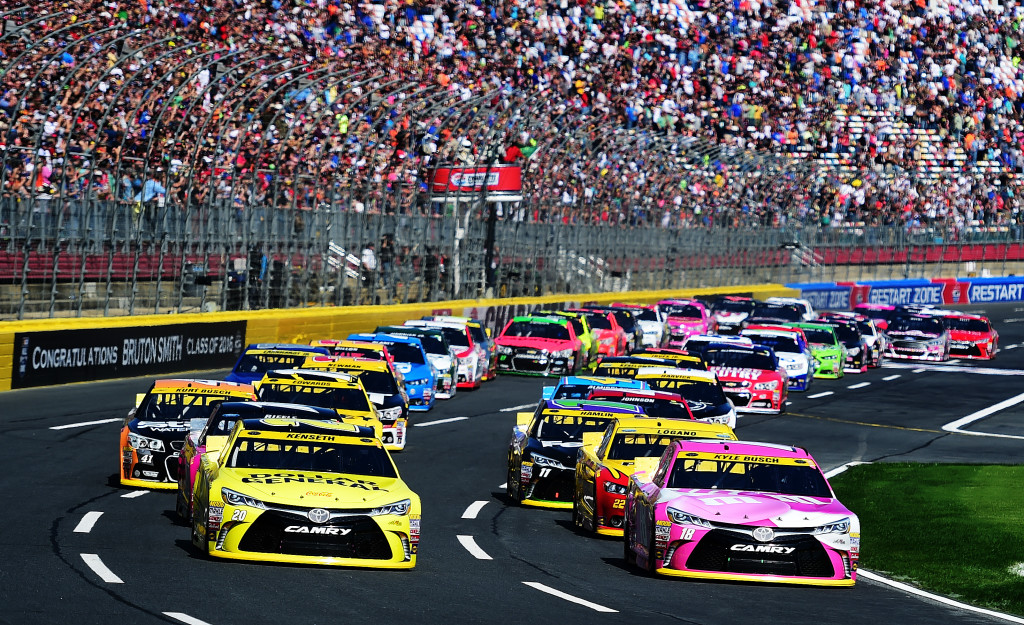 “We could hang with him for a while, but lose him in traffic,” said a disappointed Harvick.  “It was just extremely hard to pass.  All in all, we weren’t very good all weekend.  The guys did a great job on pit road, made our car better throughout the day.  We’re really proud of that and if today is one of the ‘off’ days, then we’ll be just fine.  We’re going to go to Kansas and keep our heads down and grind away.”

In the series of events over 500 miles, it didn’t take long for the some of the major names in the Sprint Cup Chase to suffer consequences at Charlotte.  Kyle Busch, Matt Kenseth, and Dale Earnhardt, Jr. all had trouble, with Earnhardt, Jr. first being bumped in the rear by Carl Edwards, sending him into the turn one wall on lap 70 and after more scrapes, Earnhardt, Jr. would wind up in 28th.

Pole-sitter, Matt Kenseth, while leading at the time, had a dismal pit stop on lap 77.  First time, his jackman slipped, losing precious seconds and putting him back in the pack in 13th.  He drove hard and had climbed back into the top five until his pit stop on lap 169.  His charge to hustle his car to his pits caused him to slide, crossing his pit box line.  Having to take more time backing up, he soon found his No. 20 Toyota team once again in the back, only this time in 20th.  Fighting for position, he later tangled with Ryan Newman on lap 177 off turn four, taking him out of the fight.  He returned to the fray after those repairs only to have a suspension part break, sending him in the turn three wall and out for the day, finishing 42nd. 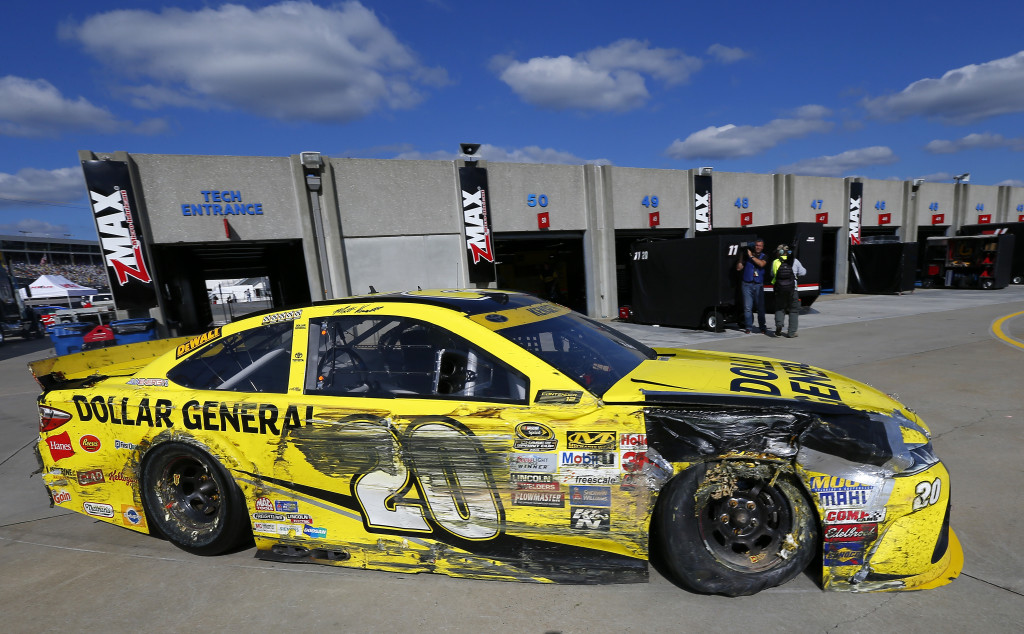 “It just snowballed on us,” said a grimacing Kenseth.  “We were fast out front and then I got tight running in the back.  I missed my pit stall going around the 21 [Ryan Blaney] and then I had to back up and that put us back there again, but honestly with Ryan [Newman], I thought he had broken when he went high and I went to the middle.  The next thing I know, I’m pointed at the fence.”

Lap 195 brought about another strange set of circumstances occurring under caution between frontrunners Kyle Busch and Kyle Larson, who were running in second and third in the lineup behind Logano.  When Busch faked his way to pit road attempting to bluff those behind him, he turned back to the track and found Larson in his path.

Larson’s Chip Ganassi team, deciding to make a last second stop, told their driver to hit pit road only to find Busch in his way with both cars colliding at the entrance to pits.  This caused the No. 42 of Larson to spin, leaving Busch with front-end damage.  Later, Busch would hit a patch of oil slamming his car into the wall, adding to his demise.  Busch would finish 20th and Larson 21st, respectively, both a lap down.

Martin Truex, Jr. had a marvelous day finishing third, followed by Denny Hamlin, and in fifth, Kurt Busch.  Jeff Gordon finished eighth in his last ride at the famed 1.5-mile oval, the site of his first of 92 wins. 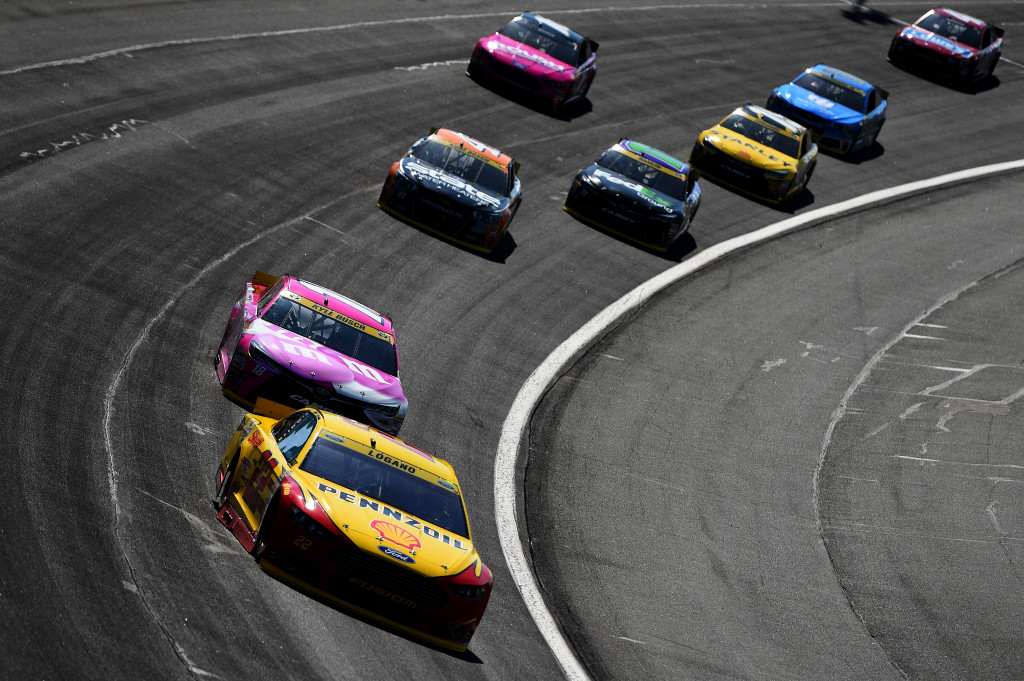 The next NASCAR Sprint Cup race is the Hollywood Casino 400 at Kansas Speedway on Sunday, October 18 starting at 2:15 p.m. EDT on NBC.