Jimmie Johnson proved a large number of naysayers wrong on November 20th by winning both the series finale at Homestead-Miami Raceway and his seventh Sprint Cup Championship trophy. By doing so, he breathed rarified air again. The first time he inhaled that sweet air was in 2008 when he won his third Sprint Cup title in a row. NASCAR has only seen one other driver accomplish this feat, the great Cale Yarborough. Yarborough was there on stage at the awards ceremony to give Johnson his championship ring. Johnson went on to win the championship the next to years, making him the sport’s only five time in a row winner.

Johnson’s first victory this year came at the legendary Atlanta Motor Speedway. He claimed his next victory three races later at the Auto Club 400 at California Speedway. He then went on an unlucky streak for a little over two months, getting in a minor wreck at the Duck Commander 500 at Texas Motor Speedway. At Bristol’s Food City 500, he finished 23rd after having to pit because of a loose lug nut. At Talladega, Paul Menard spun him and took him out of the race. 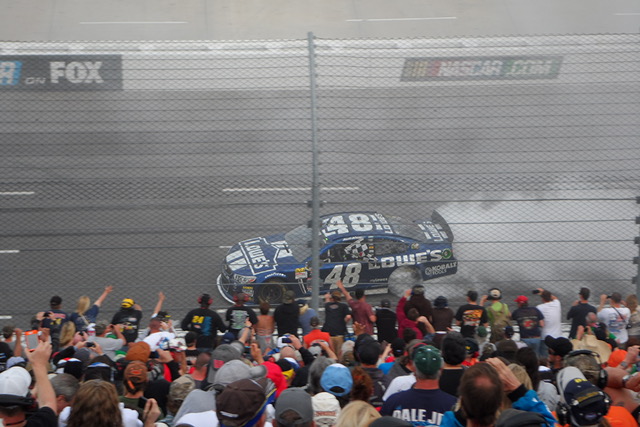 At the opening race of The Chase at Chicagoland, he had a speeding penalty after leading a race high 118 laps and ended up finishing 12th. His bad luck continued at the next two races, although he did end up moving on to the next round due to points.

The fourth race of The Chase, in the Bank of America 500 at Charlotte, looked to signal a change in his luck. Johnson let the most laps that day, with 155, and ended up taking his eighth victory at the track. This victory snapped an amazing streak of 24 races without a victory. Lady Luck snickered at him with a fourth place finish the next week at Kansas, but then gave him a weak 23rd at Talladega. 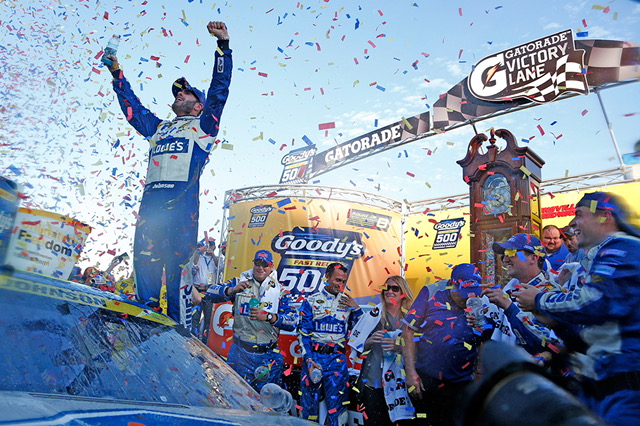 Pundits were saying it was going to be extremely difficult for “Old Six Time Jimmie Johnson” to win his seventh title this year because of this streak of poor finishes. However, he pulled out a victory on October 30th at the Goody’s Fast Relief 500 at Martinsville, passing Denny Hamlin on a restart and never looking back.

This victory locked him into the Final Four. Rain shortened the Texas race the following weekend and Johnson ended up finishing 11th. Johnson suffered a penalty for passing the pace car on a caution when he went down to pit road and then got involved in a wreck on a restart and ended up finishing 38th at the second to last race of the season at Phoenix. 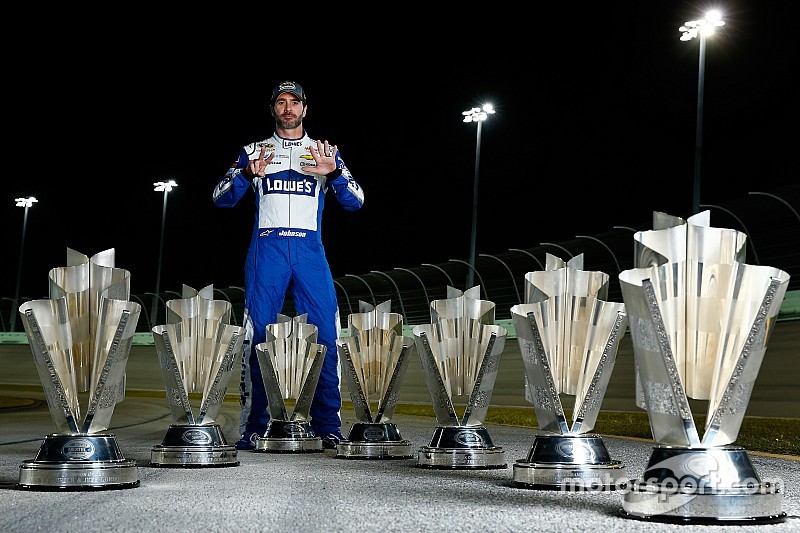 The two favorites going into Homestead-Miami were teammates Kyle Busch and Carl Edwards as Edwards had been on a tear the last portion of the season and Busch was the series’ defending champion.

Johnson’s chances at a seventh title this year looked all but over even before the race started. Due to problems in pre-race inspection, Johnson lost his starting position and had to go to the back of the field. He moved through the field quite easily and stayed near the top ten all day. However, his hopes were almost dashed when Joey Logano went down to the apron to block an attempt at a pass by Edwards and ended up causing “The Big One.” Johnson made it through this wreck without a scratch and was the ahead of all three of the other Chase Contenders. He passed youngster Kyle Larson on the final restart and never looked back, taking the checkered flag and putting himself in the record books again. He joins legends Richard “The King” Petty and Dale “The Intimidator” Earnhardt as the only NASCAR drivers to win seven premiere series championship titles. 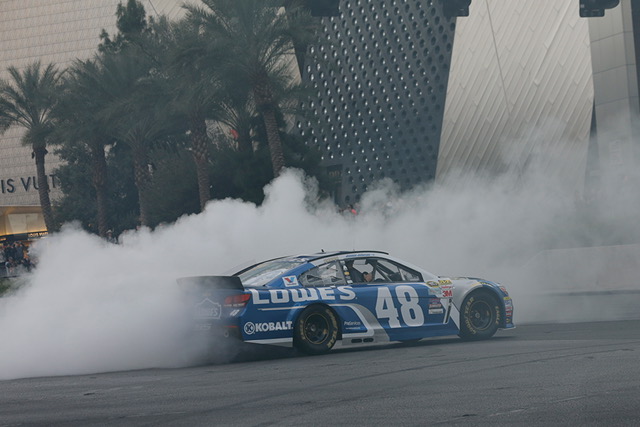 Every NASCAR driver has their diehard fans, regular fans, and their detractors. Jimmie Johnson, because he’s been so successful so quickly, also has his haters. Busch, Keselowski, Danica, and Logano also have haters. However, Johnson haters are more numerous by far.

Throughout the season, even in the off-season, you can cruise the NASCAR site’s comments sections and see people hating on Johnson, crew chief Chad Knaus, and the Hendrick Motorsports team as a whole. Because they are able to overcome problems more readily and more often than other drivers, the Jimmie haters claim that he, Knaus, and Hendrick are cheating; that because Mr. Hendrick operates one of the best funded teams in the sport, he pays NASCAR to make sure Johnson wins as often as he does. However, Johnson’s mid-season 24 race winless streak seems to prove that conspiracy theory wrong. 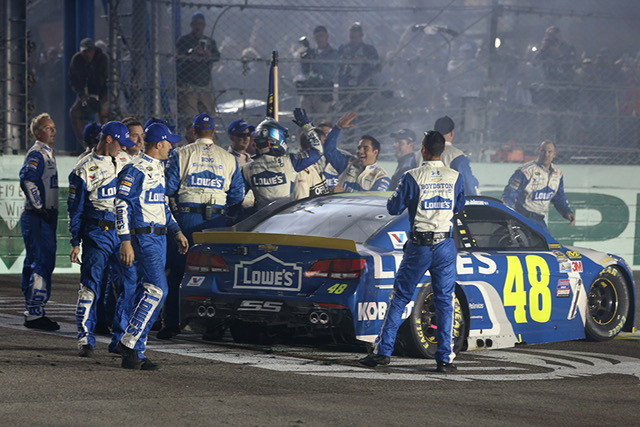 When asked if he ever thought that winning seven Sprint Cup championships would be possible, Johnson responded “ Oh my gosh, there is no, no way on earth. Just beyond words. Just didn’t think the race was unfolding for us like we needed to do to be the champs, but we just kept our heads in the game. Chad called a great strategy, made some great adjustments for the short runs. Luck came our way and we were able to win the race and win the championship. I wouldn’t be here without so many people believing in me and giving me this chance, from my dirt days-my parents and foremost, my brothers, my wife and family today. Car owners (Jeff Gordon and Rick Hendrick are co-owners), sponsors Chevrolet, Lowe’s, so many amazing people along the way that believed in me to give me this chance. Jeff Gordon, Rick Hendrick, all the men and women at Hendrick Motorsports for working so hard to get these cars fast and giving me an awesome 15 years with the company. Just thank you. From the bottom of my heart thank you. So thrilled to be in this moment and so grateful for the opportunity and so thankful and blessed. I am at a loss for words.” 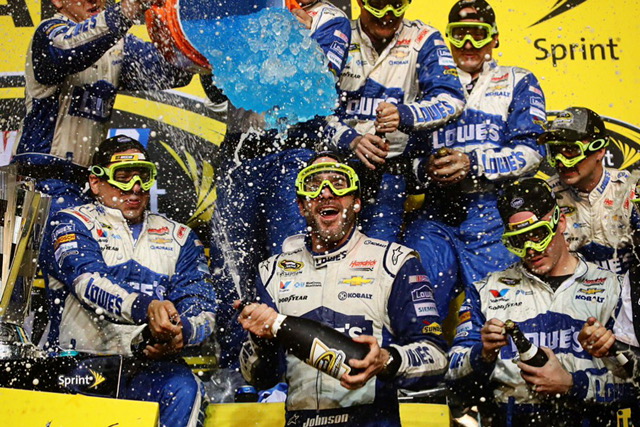 Johnson was asked what it meant to him to joining legends like Petty and Earnhardt in the record books with seven NASCAR Championships. He said “It’s big. It has a different meaning. The number seven has a very special place in my heart with Ricky Hendrick, as a lot of people know. For some reason I just felt good and calm today and things just kind of unfolded at the end for us. I know it was help from above. In my heart I wanted to believe it would happen. It has and I just can’t believe it. Thank you so much!”

One reporter asked Johnson how his heart was at that moment. He replied ““My heart is so full. I had this crazy calmness over myself all day long leading in to this. Even with us running fifth and the championship not looking like it was going to be there. I just felt something. My heart was full because I was thinking of some loved one. Ricky Hendrick and his influence of me being in this race car. Dedicating the #Se7en hashtag to him and kind of building up to this. Something happened from above. It was those late restarts that gave us this opportunity. I’m just so thankful. So thankful to have Robert Niblock here from Lowe’s. They have been with me since day one, and believed in me.
“Chevrolet – it is the only car I have ever driven. Hendrick Motorsports. It is home for me. It has been the perfect place. My family, friends as well. You wish you could say something really impactful in these moments but there is so much swirling going on right now in my head. I’m overly blessed and thankful.”

After winning his sixth Sprint Cup title, Johnson texted basketball great Michael Jordan that he had just won his sixth title and asked him “Now what?” Johnson was asked what Jordan’s answer was. “He said Go get seven. I do remember what he said. We got it! MJ, where are you buddy? We got it now.”

The one thing that sets Jimmie Johnson apart, and above, Petty and Earnhardt is that he only took 15 years to win his seventh title. Both of them took quite a bit longer to win seven titles. This writer thinks that Johnson is a shoo-in for the NASCAR Hall of Fame the first year that he’s eligible for it. What do you think? Let us know in the comments below.