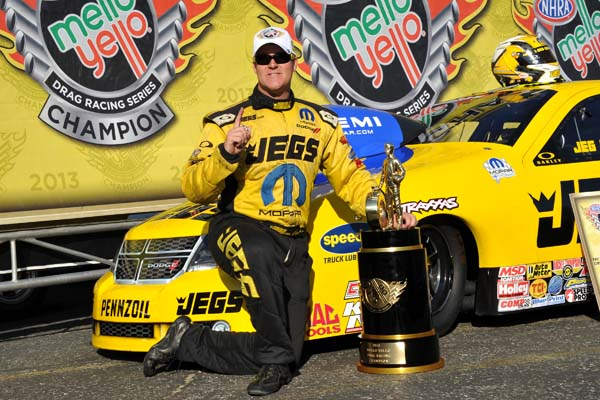 Jeg Coughlin Jr. won only one round in the final event of the 2013 Mello Yello Drag Racing Series but with Jason Line (who was the next closest competitor for the championship) also losing in round two – Jeg was able to claim the 2013 Pro Stock championship. Coughlin, who is the son of Jeg’s High Performance Parts founder Jeg Coughlin Sr, won only two events during the first 18 events of the 2013 season but in the six Countdown to the Championship shootout events, Jeg drove his Dodge Avenger to the win two times, along with strong finishes in the other four events to help him lock up the 2013 championship.

Jeg Coughlin Jr has been in and out of the NHRA Pro Stock class since first hitting the scene back in 1998 when he won Rookie of the Year. He finished second in the championship run in 1999 by winning five events and in the 2000 season, his 10 wins and 4 runner-up finishes helped him win his first NHRA Pro Stock championship. Jeg won the championship again in 2002, 2007 and 2008 bringing his career championship total to 4. After sitting out of the Pro Stock game for a year in 2011, Jeg returned to the class in the new Mopar-backed Dodge Avenger in 2012 and while he didn’t have much success in that first year back, 2013 was a very different story. Coughlin spent most of the 2013 season near the top of the championship standings and with his strong run through the final six events, Jeg was able to claim his first Pro Stock title in a Dodge race car.

Coughlin’s teammate Allen Johnson was able to run to the finals of the last event in the 2013 season (along with beating Jeg in Round Two) win jump into the second spot in the championship standings so in addition to Jeg winning his first title in a Mopar – Dodge Avengers posted a 1-2 win in the 2013 Pro Stock class.