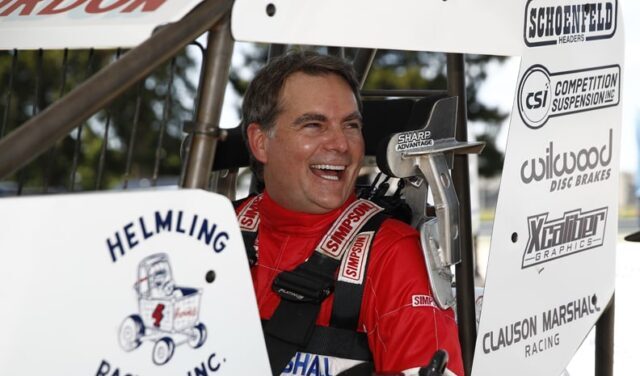 Not everyone gets to go back to their racing roots, but Jeff Gordon, a five-time winner at Indianapolis Motor Speedway in the Brickyard 400 NASCAR Cup Series race, did just that on Thursday, June 17 on The Dirt Track at IMS.

Gordon, now 49, a four-time NASCAR Cup Series champion who is now a member of the series’ broadcast team, was able to wheel a Clauson-Marshall Racing USAC National Midget racecar to promote the Driven2SaveLives BC39 event at IMS’ quarter-mile dirt track,

“I feel like I’ve gone back 25 years in my youth,” Gordon exulted after lapping Indy’s newest dirt track. “It’s even a long time since I was that excited to get behind the wheel of a race car. I can’t believe I waited this long to get back on dirt in a midget… in another way, I’m very excited that I waited, because it’s a cool event, it’s a great track, and it just made it very special for me.”

Clauson-Marshall Racing prepared a throwback livery for the NASCAR Hall of Fame driver, paying tribute to the white Diet Pepsi car Gordon drove to the 1990 USAC National Midget Series title, after earning 1989 USAC National Midget Series Rookie of the Year. The 1991 USAC Silver Crown Series champion used a red, white and blue driver suit as he did in that 1990 championship year. 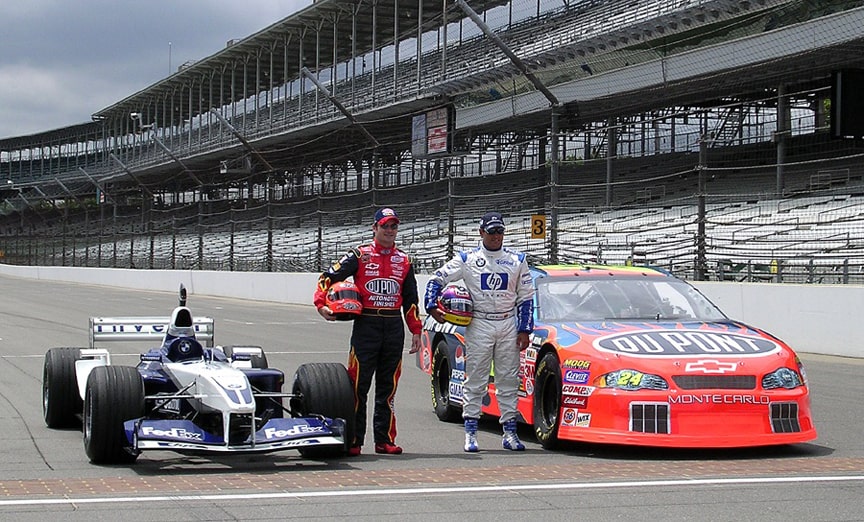 Gordon’s original Diet Pepsi car that he drove for Helmling Racing, Inc. was also on-site at The Dirt Track at IMS, exactly as he left it in 1990. The Helmling/Gordon car is the sole chassis in the history of midget racing to win The Night Before the 500, the Hut Hundred, the Belleville Midget Nationals and the Eldora 4-Crown Nationals.

This gathering was the perfect opportunity for Gordon and former car owner Rollie Helmling to reminisce about their dominant USAC days, before Gordon took his laps in the No. 4 white car. Initially he took it easy but quickly got his competitive spirit back, flooring the car off the dirt track’s fourth turn, drifting into the corner and working the wheel, just as he did 30 years ago.

It was only a 10-lap exhibition, though, and as Gordon exited the car, he cheered and clapped his hands in awe of the track and the car he was invited to drive. “Something about this place is just magical for a lot of people, but for me, in particular.

“It’s always been that way from the time I came here and just went through the IMS museum before I was even able to drive a race car around this track, to the first time I did drive a race car here. And then every time thereafter,” Gordon reminisced, “I come to visit here and I still get excited driving through the tunnel. This place, the history and what it means to motorsports and what it means to me, is incredible.”

Gordon, born in California moved to nearby Pittsboro, Indiana at age 15 in order to race, when California rules wouldn’t allow him on-track at such a young age. HIs parents put him in a quarter-midget at the age of five, bringing him to Indiana because they realized he had talent that needed to be nurtured. Although he’s had enviable success on the historic 2.5-mile IMS oval, including winning the inaugural, 1994 Brickyard 400, he’d never had the opportunity to drive The Dirt Track at IMS until Thursday.

“I’ve not had many bad days at Indianapolis, but this is going to go toward the top,” Gordon said. “From my first tie racing here in the Brickyard 400, of course, the wins are memorable, but the F1 ride swap and then this is right up there with it.” Gordon and Juan Pablo Montoya spent a day “Tradin’ Paint” in June of 2003, using a previous configuration of the IMS road course. They drove one another’s race cars on the road course. Eventually, Montoya left Formula One and joined Gordon on the NASCAR tour, driving for Chip Ganassi Racing.

After his 10 laps on this throwback day on The Dirt Track at IMS, Gordon, his parents Carol and John Bickford, along with Helmling headed to Thursday Night Thunder Homecoming at Lucas Oil Raceway in nearby Brownsburg, another track where Gordon experienced great open wheel success on pavement. His dirt and pavement open-wheel success helped elevate Gordon to a national stage and set him on course for his stellar NASCAR career, where he earned 93 victories in the Cup Series.

“I’m so thankful to Tim Clauson and Doug Boles (IMS president), for talking me into doing this,” Gordon said. “I put it off for way too long. I get offers every once in a while to run midgets or sprints, but I kept turning them down. I’m so glad I didn’t turn this opportunity down, because that was the most fun I’ve had in a long time!”

The Driven2SaveLives BC39 Powered by NOS Energy Drink had its first running in 2018 and again in 2019. The third race is scheduled for August 18 and 19.