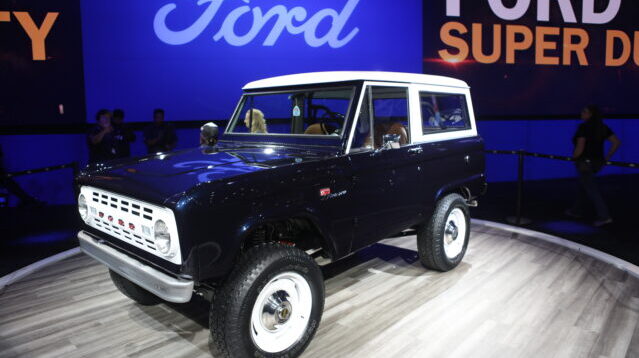 Late-night host and car nut Jay Leno is no stranger to restoring classic cars. A few years go, fellow late-night host, Crag Ferguson left a junked ’68 Bronco in Jay’s parking spot as a gag gift for Jay’s final Tonight Show broadcast. What Craig didn’t foresee was a happy Jay Leno, excited to get this old Ford runnin’ and gunnin’. Jay handed over the keys to Theresa Contreras of LGE-CTS Motorsports and David Pericak Director for Ford Icons, and from there, they got BUSY.

The original ’68 Bronco originally had a tired old 289 V8 putting out around 100 horsepower, and Dave Pericak wanted to go big, really big. The vehicle now has Ford’s brand new 5.2-Litre supercharged V8 from the Gt500, putting out a massive 760 horsepower and 620 lb-feet of torque. Leno wanted to the Bronco to be a sleeper, so it held on to the period-correct wheels and tires and kept the transmission a manual as opposed to the dual-clutch only option from the GT500 (this required a ton of engineering on Ford’s part).

The result is a refined classic with the heart of a beast.