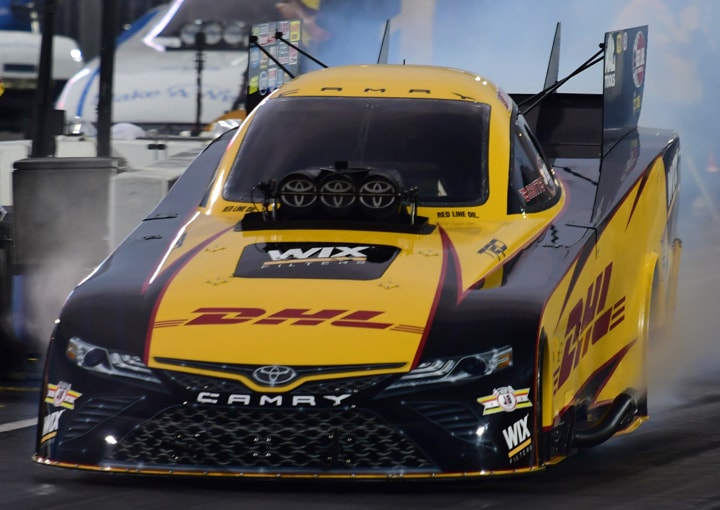 J.R. Todd is accustomed to succeeding where it’s unexpected. With nine NHRA Top Fuel wins to his name and another four in Funny Car, Todd has proven he can drive both nitro-powered, 10,000-plus horsepower elite vehicles fast and quickly.

Racing the DHL Toyota Camry for Kalitta Motorsports, with Jon Oberhofer calling the shots at the computer, Todd needed only half a season to become the first – and only – black driver to win in both categories (Antron Brown has won in both Pro Stock Motorcycle and Top Fuel). Last year at the Toyota NHRA Nationals on the Sonoma Raceway dragstrip, Todd recorded his first Funny Car win for the Yella Fellas.

Racing a Funny Car is extremely different from piloting a dragster, Todd says. “Funny Car is more of a challenge; it’s not that dragsters are easy to drive, it’s just that over time, if that’s all you’ve ever driven, it almost becomes second nature to you. You build up your habits or characteristics of driving and you really can’t apply those to a Funny Car.”

Changing his characteristics took a while – Sonoma was the 15th race on the 2017 calendar, just as it is this year. “I was just training myself over to drive something new,” Todd said of his adaptation to the very different racecar. “It’s a lot of fun, but those cars will definitely humble you as a driver.”

What makes the Funny Car so much more difficult for someone with Todd’s experience? “First off, just the wheelbase: It’s almost half the length of a dragster with the same amount of power; the engine’s in front of you; you can’t see as well [as in the open-cockpit dragster]; they’re heavier – it’s just a whole different ballgame.”

The Funny Car, because of all those challenges, requires more driver input. “You’ve got to steer these things a lot more and that’s the thing, learning when you have to steer them and when not to steer them,” Todd advised. “It takes some getting used to.

“With the dragster, you can finesse the car on the track. Sometimes you have to get nasty with a Funny Car,” Todd explained. “It’s definitely harder to drive, and just when you think you’ve got a handle on it, it’ll throw you a curveball and make you think again. I mean, it definitely makes you question yourself, sometimes, as a driver.” 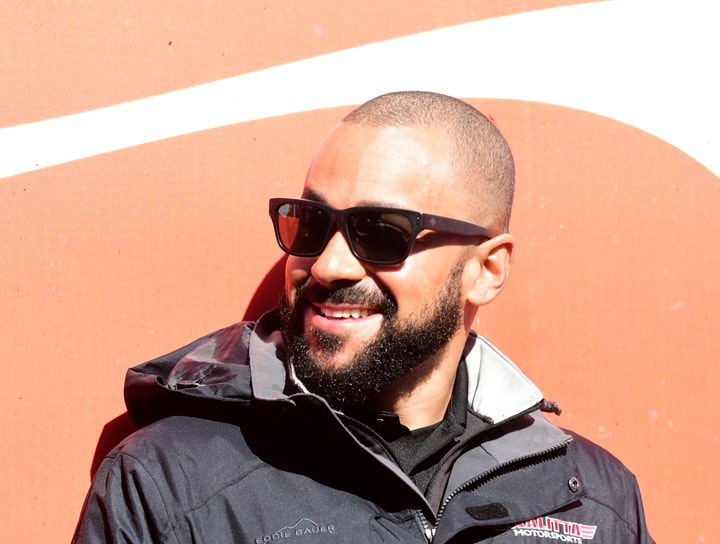 J.R. Todd has won more than these thirteen races in NHRA; when Eric Medlen died in 2007, a memorial race – in mini-sprint cars on dirt – was held in central California, Medlen’s home area, to raise charity funds benefiting causes Medlen backed. Todd listened to the local racer with whom he’d been paired and beat his contemporaries at this very different form of racing.

“I’ll pretty much drive anything I can get my hands on at this point. It’s nice to sample, to go out and experience different types of racing. I wish I had started when I was a lot younger and when I had opportunities that I passed up. You never want to limit yourself,” he mused. “Driving dirt cars and things like that give you a better feel for driving things like this Funny Car. I keep telling people that driving a Funny Car is like dirt-tracking in a straight line.”

There have been some driver swaps between different series over the years and, with Todd living close to Indianapolis Motor Speedway, did he ever have the urge to sample that form of motor sport? “Honestly, as a kid I was always an Indy car fan, but I think those guys are nuts! You’re laying down in those things, ripping around ovals at like 220 miles an hour. When they crash it’s bad. I feel like I’m safer in this thing – I’m more at home in this thing. I’d be way out of my element in an Indy car… but it would be fun to try – by myself.”

So a test day might be an option? “I definitely wouldn’t want to try one of those cars at the Speedway; it’s so big and so flat. It takes some pretty big ‘you know whats’ to get around there. I would have too go somewhere small and slow,” he allowed.

For now, J.R. Todd is thinking about only one thing: winning with his DHL Toyota Camry at Sonoma. Again. With two Wally winner’s trophies tucked away after the first 14 races in 2018’s 24-contest campaign, Todd is lodged in sixth place. He’d like to move up in those standings prior to NHRA’s Countdown to the Championship playoffs that begin after the Chevrolet Performance U.S. Nationals on Labor Day weekend. A second straight win in California’s Wine Country cold definitely help his cause.