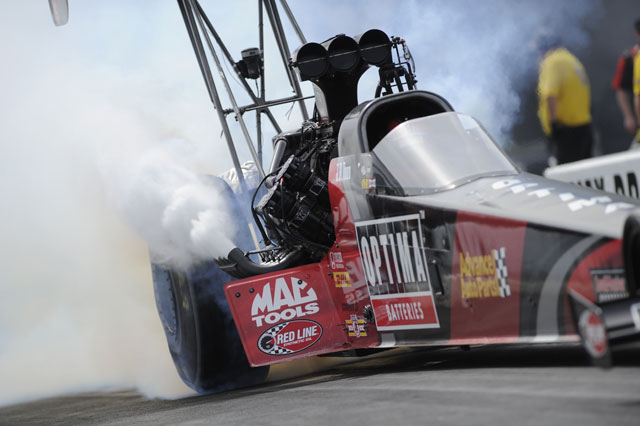 It’s not every day opportunity knocks, and in J.R. Todd’s case, it rang instead, via cell phone. Every sporting event has that final step that can only come after “The Call.” On a Friday before the NHRA race in Las Vegas, Todd got his summons from the big time.

Todd didn’t have any plans to go to Vegas that weekend. He was heading home to listen to the first round of qualifying online. His parents were coming up that evening.  They were going used car shopping in hopes of trading in Todd’s car, and were going to take in some of the NCAA tournament happening downtown.

“We met up with my family at Buffalo Wild Wings and watched the Kentucky-Louisville basketball game,” said Todd. “I had sat down and was having beer with my family  around 9:30 or 10:00 p.m…I just happened to check my phone and noticed that Cowboy Bob (Coffman) of Technicoat had called.  It was really loud at the BW3 and I got a text from Bob telling me to call him ASAP.  You know whenever he calls or texts he’s joking or just fooling around and I didn’t think much of it.  I texted him back saying I’m sorry I missed your call and that it was really loud in here.

“Then I called him back, got him on the phone and he said, ‘I’ll call you right back as soon as I can’.  I was waiting for him to call me back and at that time, I figured something was going on…Around 15 to 20 minutes later, the phone rings again from Cowboy Bob.  So I answered and said ‘Hey Bob, what’s going on?’

“Then this voice said, ‘This is Connie’,” said Todd.  “It caught me totally by surprised and he asked me if I could check out flights to be in Vegas the next morning.  He said he was having some driver problems and wanted me to come out there to see if I could drive that thing.  Sure enough, I wasn’t going to tell him ‘no’.

“After Connie called, I called Cowboy Bob back and he explained to me what was going on.  I asked him to find out what their plan was. If it was just for this weekend, I had no problem with it.

“Then I called Connie back and asked what his intentions were and he said ‘let’s get through the weekend.’  I called JimO (team manager, Oberhofer) after I got off the phone with Connie to just reassure myself that Connie wasn’t making a knee-jerk reaction.  He talked with Dougie (Doug Kalitta) and said to me, ‘no matter what, just come out here and we’ll see what happens. “

From that instant, it was a whirlwind.  Todd and his family immediately headed to the house to make a reservation for a 6 a.m. nonstop flight  to Las Vegas, and then headed over to Bob Vandergiff’s shop to grab all his driving gear.  He returned home around 12:30 a.m. to start packing, getting about two hours of sleep before heading to the Indianapolis Airport.

“We arrived in Vegas around 7:30 a.m.,” said Todd. “From there I headed to the track and once the guys got there, I got to sit in the car and figure out what we needed to do to make changes in the cockpit where I could at least drive the thing.  We added a bunch of padding to the seat insert that was in the car.  Basically, that’s all we did.  From there on I could reach the pedal and steer the thing, so that was the main thing.  Before you knew it, we were pulling up to the line for qualifying on Saturday.

“When I got there, I thought there’s no way I’m going to able to fit in this thing.  Grubby (David Grubnic) is 6’3” and I’m 5’6”.  I was laughing to myself thinking we’re going to have duct tape some 2 x 4s to the pedals and put some phone books in this thing for me to be able to drive it.  Like I said, all we really had to do is change the padding in the seat.”

It wasn’t a perfect fit for the 32-year old driver, but it got him through the weekend. “We were fortunate to get the car qualified 11th,” said Todd. “Then we went on to win the first round against Richie Crampton.  Got beat second round by (Steve) Torrence.”

After the race he got a chance to talk with JimO, and from there it was ‘Hey, I have to decide’ because they offered him the ride.

“To me, this is a once in a lifetime opportunity,” smiled Todd.  “A great team like the Kalitta group has all the resources and parts and pieces to go out there and win races and contend for a championship.  All along, that has been my goal, since day one of my racing career.

“I’m thankful for the opportunity that Bob Vandergriff gave me in the years past, because if it wasn’t for him, I would be probably working a nine to five job. He gave me the chance to keep my face out there and to race his car part time which we were trying to find money to hopefully get that car out there full time.  It’s hard to find the funding for that.”

Todd then had to call Bob Vandergriff to clarify his situation and the opening on the Kalitta team.

“That was a pretty difficult phone call I had to make to Bob that Monday evening after Vegas,” sighed Todd.  “Explaining my situation and what I thought was best for me and what I wanted to do.  He sounded more bummed out than anything on the phone.  He and I have been buddies way before I even started driving for him.

“As time has gone since then, I think he’s gotten a little aggravated and frustrated about the situation.   At the end of the day, you have to look after what’s best for yourself.  I think this is the best opportunity in drag racing, yet.”

Todd now has to focus on his reaction times and the new car coming within the next race or so.  He’s excited about that and the opportunities for the rest of the season, especially since reaching the championship round in his second outing in the car at the Charlotte 4-Wide Nationals

“Right now we’re 10th in points and would have been ninth if I could have gotten around Shawn (Langdon) in the finals at Charlotte,” said determined Todd. “If it keeps running the way it has been, there’s not any reason we can’t go out there and win a race or more.  Once you do that, I think we’ll solidify our spot in the top 10 of the Countdown.  Once you make the Countdown, anything can happen.

“At this point, my goal is to go out there and keep winning rounds.  Hopefully keep chipping away with the little points ahead of us.  At the end of the day, we want to win races.”

Putting yourself in the seat of a Kalitta Top Fuel Dragster with the name ‘Bounty Hunter’ on it is a little bit overwhelming for a shot like this.

“I wouldn’t consider myself a ‘Bounty Hunter’,” laughed Todd.  “I consider myself extremely fortunate and lucky to be driving for the Bounty Hunter.  When I was driving in Las Vegas, Connie put the names of other crew chiefs on the car, just like he had ‘Back in the Day’ having other driver’s name on his car.  When we beat Richie (Crampton) first round, the crew grabbed the black tape and striped it through Aaron’s (Brook, crew chief for Crampton) name and that was pretty neat just as he did it.”