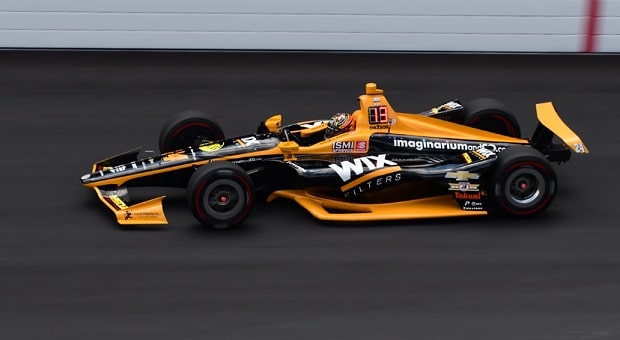 A day before departing for the Virginia NHRA Nationals, the eighth race in the 24-contest season and the second consecutive race at the recently renewed Virginia Motorsports Park, Todd paid a morning visit to Indianapolis Motor Speedway.

A man who’s at home in any form of straight-line racing, with an equal nine wins in both Top Fuel and Funny Car together with a penchant for circle-track racing (he loves sprint cars), Todd took a ride around the historic 2.5-mile oval with one of the acknowledged stars of the speedway, Mario Andretti.

A legendary driver who is celebrating the 50th anniversary of his single Indianapolis 500 victory, Andretti took the drag racer for a magical ride in the NTT IndyCar Series’ two-seater, edging closer to the four corners of the oval than might make Todd comfortable.

Once he climbed from the two-seater, Todd made his way to the Dreyer & Reinbold garage of fellow Wix Filters racer Sage Karam, who is making his sixth attempt to win the Greatest Spectacle in Racing on May 26. The duo talked “shop” a little bit and then Todd climbed into the bright gold and black Chevy-powered No. 24 entry.

As he positioned his arms inward to fit into the tight cockpit that wasn’t quite a true fit for him (Karam’s taller), Todd remarked that the lie-down status of the Indy car is quite similar to the Top Fuel dragster he used to drive, as well as being able to see the tires and having the engine behind him.

In the Funny Car he’s currently racing, Todd sits in a more upright position and can barely see over the engine in front of him, forcing the driver to concentrate well down-track. Todd, the first African-American racer to become an NHRA Funny Car titleholder, was attentive as Karam explained all the things he could do with the controls of the Indy car.

Asked what he thought about the dashboard and controls of the Indy car, Todd thought there was too much to do inside the car, while in his business he’s got milliseconds to gather up a racecar in the 1,000-foot races Todd experiences on every NHRA weekend.

The visit concluded, J.R. Todd returned to his Lawrenceburg, IN home to prepare for his weekend of racing in Richmond. “I really like the track,” he said of the Richmond track. “I expect track records to fall this weekend because we’ve got good information from last year.”

About Anne Proffit 547 Articles
Anne Proffit traces her love of racing - in particular drag racing - to her childhood days in Philadelphia, where Atco Dragway, Englishtown and Maple Grove Raceway were destinations just made for her. As a diversion, she was the first editor of IMSA’s Arrow newsletter, and now writes about and photographs sports cars, Indy cars, Formula 1, MotoGP, NASCAR, Formula Drift, Red Bull Global Rallycross - in addition to her first love of NHRA drag racing. A specialty is a particular admiration for the people that build and tune drag racing engines.