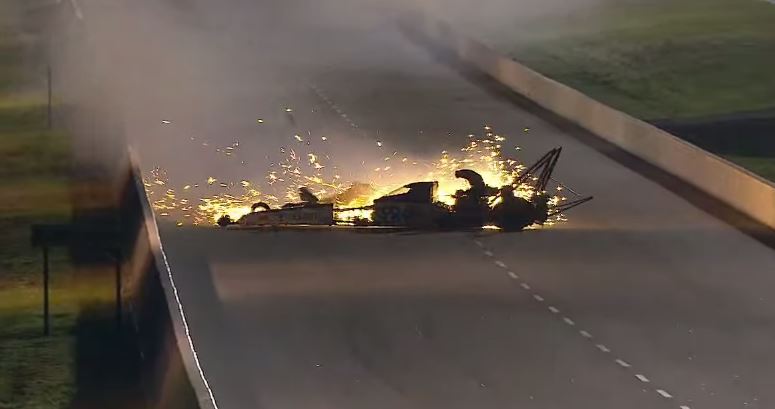 When NHRA founder Wally Parks saw the need to organize drag racing 63 years ago, his primary goal was safety.
After all those young men returned home from World War II, the economy boomed and discretionary spending power was never more predominate.

With that extra cash, cars became a commodity and the quest for speed quickly brought interest to many would-be racers and the only place to race were the streets of suburban Los Angeles, and car clubs quickly sprang up around the city.

Parks, who also served in the South Pacific in World War II helped put together the original Southern California Timing Association. That led to his time as editor of Hot Rod magazine, giving him the forum to end the chaos and create order by instituting safety rules and performance standards. In 1951, Parks helped legitimize the sport as president of the newly formed National Hot Rod Association.

Moving quickly since that time, we’ve seen speeds escalate from 140 miles per hour at the Santa Ana Drags in 1950 to 337 mph during the era of 1,320 feet.  After Scott Kalitta’s tragic accident, the quarter-mile would become a thing of the past and in 2006 the 1,000 foot era began for everything that runs on nitromethane.

With safety as the only motivating factor that perpetuates NHRA regulations, items such as the implementation of seat belts, adding head protection in the development of helmets, fire suits, fireproof shoes and gloves to protect the rest of the body became some of the mainstays of safety that NHRA introduced to its series, and the evolution of those have saved many lives.

After the driver was becoming more protected, that led to the introduction of the drag chute, blower restraints, and one of the key ingredients was the protection provided by the chassis.

When nitromethane was finally allowed in the NHRA starting in the mid-’60s, elapsed times decreased rapidly while speeds grew dramatically. It was August of 1964 when we saw “Big Daddy” Don Garlits break the 200-mph barrier in New Jersey.

Since that time, things have changed drastically. In 2014, we see the Top Fuel and Funny Car classes with all the modern conveniences to protect the driver at speeds in excess of 320 mph. Modern fire systems knock down engine fires.

Today’s chassis have taken on a technological design of performance and safety. Computers have taken the blueprints of the original cars of the ’60s and transformed them into metal marvels. Many of the teams are just now beginning to build their own chassis from the ground up, tailoring them to their specific needs.

Don Schumacher racing took driver protection one step further, and other teams are noticing. Today’s DRS Top Fuel dragsters all have closed cockpits. Antron Brown was able to walk away from a horrific crash thanks to the closed cockpit at the 2013 Winternationals when a blown engine sent his dragster spinning on its side into the wall.

Then at Atlanta Dragway earlier this year, Brown suffered another near catastrophe, again blowing his engine, deflating his right rear tire sending him careening into the wall. In the end, he walked way very upset, but alive.

Another example from the open cockpit days was the terrible crash that Cory McClenathan experienced in 2006 at Bristol. The torque the engine puts on the chassis is clearly shown in this example; when things go awry, it happens quickly.

A safety device still being used today is the original braking device on the Top Fuel dragster — the parachute.

One of the biggest proponents of safety is 18-time National event winner and three-time NHRA Top Fuel champion, Shirley Muldowney. She started driving in 1958, making her debut at Fonda Speedway. In 1965, she obtained her NHRA competition license and personally saw the need for better and innovative equipment, and her parachute was one of the many things she especially paid attention to.

“All of my cars in the early days had ribbon chutes by Deist,” said Muldowney. “It was a very reliable piece and so were the Deist chutes that they came up with after. I visually remember one time the loss of brakes in the shutdown area and you discover this as you’re heading to the traps. I’m thinking it was in the 70s, I grabbed the brake and the handle came straight back and I think I only had a single chute at that time. The chute was enough and the track had enough run out and I could get the car stopped. That was a blessing to have that chute.”

As speeds improved, so did the safety factors found the NHRA Rule Book.

“When the NHRA came out with the rule that two chutes were mandatory, I thought that was probably one of if not the best rule NHRA have ever made and was very smart about it,” said Muldowney. “That was the result of Carl Olson, who pushed for that.”

Muldowney still pays attention to today’s safety equipment and makes note of where improvements could be made.

“I see today and watch it carefully,” she said. “The cars today gobble up so much ground so quick before you know it you run out of run out. The majority of the racers that have problems don’t pay attention to their equipment. I will see chutes on Friday when everything is fresh and you should not see a tear or a rip. You know when you see a tear in the parachutes on the opening day you know they arrived at the track with equipment in that condition. That’s one of the many parts of the car the teams should be paying special attention to and one of the most important features on the car – the parachute. So if you see that happen in the semi-finals on Sunday, you know they either didn’t have time to change it or didn’t catch it from an earlier run.”

“Another thing I’ve noticed is dirty parachutes. It weighs much more than it would weigh if it was clean. The more weight, the longer it takes to come out of the pack and the longer it takes to blossom. When they’re dirty you run that risk. I’ve seen teams after washing the chutes put them in the dryer – wrong! You should never put a chute in a dryer. They need to be air dried. What that dryer does is makes it porous and the air will go through the chute.”

The NHRA has been fortunate and is doing all they can to make sure that all parts and items are SFI (SEMA Foundation, Inc.) approved, meaning they can withstand the pressures, stress, and crashes that do occur. This level of safety is matched by all the major racing sanctioning bodies throughout the United States to make sure motorsports are safe and fun for everyone involved.