RacingJunk News > News > Event Coverage > Is There a Future for the Automobile? 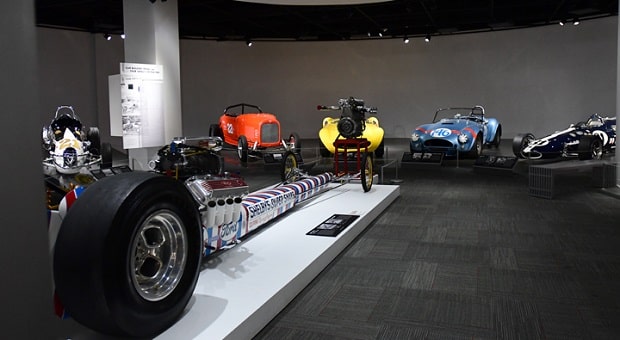 The second annual “Future of the Automobile” conference, held the first Friday of May at the Petersen Automotive Museum, was certainly a confluence of art and automobiles in Los Angeles. Bringing together vehicle manufacturers, technology savants, urban planners and regulatory agencies for extended discussions on future mobility, there was a lot of ground to cover in this single day and overlapping conversations made it difficult to access every single presentation.

Appropriately, the museum’s executive director Terry Karges started the day-long program with an opening panel highlighting visions of tomorrow. The Petersen, celebrating its 25th anniversary in 2019, elected to use the Bruce Meyer Family Gallery for this and several other presentations, allowing both speakers and attendees to be surrounded by many of Meyers’ fabulous vehicles as they talked about transforming how people move from one place to another. Meyers was on hand for the program.

In all of the discussions, speakers recognized that the automobile will continue to be one of many forms of transportation. Its form and format may change, but it was accepted, by these panels at least, that the automobile does have a direct future, at least in the near term. Whether through single ownership or shared participation, vehicles as we know them will continue.

Whether they will be powered by internal combustion engines, battery electric, hydrogen, hybrid technology, fuel cell or another propellant yet to be discovered is anyone’s guess, but vehicles will definitely continue. As Stewart Reed, chairman of transportation design at Pasadena’s Art Center College of Design, pointed out, at the 1939 World’s Fair in New York City, General Motors produced Futurama, which portended the appearance of automated highways with cars navigating traffic by way of “automatic radio control.”

That hasn’t happened 80 years later, but we are on the verge of autonomous vehicles and their technology is becoming far less radical than it was even five or 10 years ago. All-electric cars are on the road; autonomous features are available in many vehicles today and will continue to grow.

Infrastructure is the biggest issue facing municipalities that are looking to move people out of their personal cars, onto public transportation or shared rides. As members of Los Angeles’ Metro, Department of Transportation and other forward-thinking public entities explained, large cities like Los Angeles desperately need a transit redesign that is more efficient for both users and operators.

Educating the public is one aspect, but before cities push an unwilling populace onto trains, buses or even scooters in densely populated cities, cities, counties and states need to produce proposals that are clear for the public to understand what they’re voting for. In California, for instance, people voted to produce high-speed rail, despite lacking a clear understanding of any logic behind the proposal. At this time a train from LA to San Francisco area is on life support, thanks to cost overruns and the proliferation of consultants who enriched themselves without producing a single mile of rail.

Interestingly, as the discussions resounded concerning highs-speed rail, more efficient public transportation and vehicular travel without pesky gas-burning automobiles, very little input came from anyone concerning electric vehicles, which are gaining popularity in the Los Angeles area. Discussing the future of infrastructure and city planning, at no time did any of the participants address the issue of easily accessible charging stations for electric vehicles.

While some were addressing artificial intelligence and autonomy in driving, this writer chose to discuss the future of vehicle ownership and ridesharing. How important is it to own a vehicle? Is it a right or a rite? With the head of ride-swapping Turo on-hand, along with Henrik Fisker of Fisker Inc., the discussion trended to innovation, which participants agreed never looks like what we’ve expected. Doug Clark of Hagerty, one of the sponsors of the conference, spoke to experiential driving. With so many vehicles parked for much of their lives, Turo intends to change that perception and make it less of a reality as people swap vehicles for the experiences they’re looking for.

During the luncheon break at mid-day participants were able to experience some of Hagerty’s vintage vehicles – all had automatic transmissions – taking rides and drives in a Ford Bronco, a Mercedes-Benz 280DSL and American Austin coupe. Once that was done, McKeel Hagerty of Hagerty gave the afternoon keynote – the morning keynote came from VW’s Klaus Bischoff, who spoke to his company’s push towards electric vehicles for street and racetrack (like the Pikes Peak-conquering ID.R) – and Hagerty went full-frontal on the human value of cars and driving.

We have to realize, Hagerty said, that culture drives technological decisions. He’s excited about the future of automotive technology and believes that cars do matter in the coming economy. We need a blend of old and new in vehicular technology, Hagerty mused, as he extolled the value of the personal vehicle. While public transportation is available in hub cities, it’s not always practical in California’s large and small towns.

Hagerty’s keynote finished around 3PM and, while the conference was slated to continue for at least another hour and a half, there was the prospect of sitting in Los Angeles’ frustrating traffic jams and not making it home until 7PM. As it was, the commute to this conference took up nearly three hours of Friday’s allocation of time, thus bringing the point to the fore: Something needs to be done to ease congestion on our roads. The question is, what changes are needed and which are wanted?

About Anne Proffit 635 Articles
Anne Proffit traces her love of racing - in particular drag racing - to her childhood days in Philadelphia, where Atco Dragway, Englishtown and Maple Grove Raceway were destinations just made for her. As a diversion, she was the first editor of IMSA’s Arrow newsletter, and now writes about and photographs sports cars, Indy cars, Formula 1, MotoGP, NASCAR, Formula Drift, Red Bull Global Rallycross - in addition to her first love of NHRA drag racing. A specialty is a particular admiration for the people that build and tune drag racing engines.