RacingJunk News > News > Inside the Hellcat

According to Tim Kuniskis, President and CEO of the Dodge and SRT Brand, Chrysler Group LLC “The new 2015 SRT Hellcat is the most powerful muscle car ever, with 707 horsepower and 650 lb/ft. of torque, we have unleashed a true GT car with an all-new driver-focused interior, the TorqueFlite eight-speed transmission and the first supercharged Hemi engine Chrysler has ever produced. The Challenger Hellcat has been released!”

When Fiat/Chrysler introduced the Hellcat engine, the engineering team started with your “basic”, normally-aspirated 6.4-liter Apache engine that has been delivered in previous Challengers and Chargers. But, this new engine needed to deliver more. More reliability, more power, and more of anything a car guy could want. The Apache engine was already a very potent and reliable engine, but looking forward, the folks at Mopar—err; I mean Fiat/Chrysler, felt that they needed to take a big leap into the super high-performance arena—enter the supercharged Hellcat engine.

The Hellcat engine shares a cylinder head that is almost identical to the Apache heads used on the SRT 6.4 Hemi engine. The combustion chamber volume is 73.4 cc, and valve angles are 18-degrees on the intake valves, and 16.5-degrees on the exhaust valves. A Hellcat difference is that the stem of the intake valves in hollow, and the exhaust valves are Sodium filled. While the Apache head uses the same rocker arms and bolt pattern as the 6.1-liter Hemi, the head uses larger 2.14-inch intake and 1.65-inch exhaust valves. The square intake ports are almost perfectly square, at 2×2-inches, and the flow is in the 340 cfm range. The Hellcat’s cylinder heads use a heat-treated 356-T6 aluminum alloy, which removes heat at a faster rate than the Apache’s 319 alloy. Finally, the actual cylinder head casting on the Hellcat heads has strengthening gussets that are cast into the deck face, directly behind the intake ports. This gusseting not only adds strength, but it also helps pull heat from the combustion chamber.

To build this hellish “cat,” Chrysler needed a solid foundation that could support the end result. The Gen III Hemi block is a stout piece no matter how you look at it, but some engineering upgrades needed to be done to make the Hellcat engine survive  what the engineers were about to throw at it. At a quick glance, the Hellcat’s engine block looks almost identical to the “base” 5.7, 6.1, and 6.4-liter block. It is made with a high-strength iron, and features five main-bearing supports that provide a rigid structure for the crankshaft. Upon further inspection, an engineering difference from earlier Gen III Hemi blocks is that the support webbing between the main bearings and the cylinder bores has been increased to handle the anticipated higher-stress loads that would be developed. A significant change in the coolant circuit was also required in order to manage the Hellcat’s projected increase in thermal output. What this means is that the water jackets are longer, and continue to a level that is directly across from the piston crown’s when it as at bottom dead center.

The forged crankshaft is a little shorter, and features a stroke of 3.58 inches, and as expected, no MDS is available with the Hellcat. The Hellcat’s stroke may be shorter than its predecessor’s 3.72 inches, but it is still machined from the same forging as the longer stroke Apache crankshaft. On the end of that crank is a Hellcat-specific damper that is designed to withstand the supercharger usage.

Inside, the Hellcat features forged pistons, which have significantly more “meat” above the top ring than the naturally-aspirated Apache piston. The needed extra material results in .07-inch more compression height than the 6.4-liter’s pistons. Like all Gen III Hemi pistons, the Hellcat pistons receive anti-scuff and oil-shed enhancing coatings on their skirts. The respective shapes of the piston skirts on the Apache and Hellcat are however, quite different. The piston in the Hellcat’s is wider at its base, and the built-in support ribs better intersect with the pin boss nearer the center of the piston. Finally, the Hellcat creates a 9.5:1 compression ratio, while the Apache piston delivers a higher 10.9:1 compression ratio.The Hellcat’s connecting rods are the same length as the Apache’s, and like previous Hemi engines, they are made of a forged powdered-steel construction. The piston-end of the Hellcat’s connecting rod makes use of a full-floating wrist pin that is suspended inside a bronze bushing.

The supercharger on the new engine was provided by IHI,  they worked with Chrysler to develop a specific supercharger. The 2,380cc blower uses integral charge coolers that are designed to keep inlet-air temperatures below 140-degrees Fahrenheit. The compressor is a twin-screw design and between the inlet and discharge areas of the supercharger is an electronically controlled internal bypass valve. When activated, this valve allows air into the intake ports without being compressed. During situations like off-throttle conditions, this reduces wear on the supercharger. Boost is regulated to around 11-1/2 psi. This new supercharger is “sealed for life”, which means that you never have to change the synthetic oil, has a drive ratio of 2.36:1 and a maximum speed of 14,600 rpm. In reality, the Hellcat supercharger is capable of pushing six gallons of air into the engine—in one minute, and the engine uses 80 of its 707 horsepower, just to drive the supercharger.

The Hellcat engine shares a cylinder head that is almost identical to the Apache heads (the Apache’s combustion chamber volume is 73.4 cc, and valve angles are 18-degrees on the intake valves, and 16.5-degrees on the exhaust valves). In the Hellcat, the stem of the intake valve is hollow, and the exhaust valves are Sodium filled. The Hellcat cylinder head uses larger 2.14-inch intake and 1.65-inch exhaust valves. The Hellcat’s cylinder heads are also made from a heat-treated 356-T6 aluminum alloy, which removes heat at a faster rate than the Apache’s 319 alloy. When it comes to camshaft requirements, adding a blower to the engine means that less aggressive valve timing is a possibility. The Hellcat’s hydraulic-roller camshaft is slightly milder than the preceding 392 (Apache .577/537-inch lift to Hellcat’s .561/.551-inch—at .006-inch lift). The duration—as measured at .006-inch lift inside the Hellcat is 278/288 degrees, as opposed to the Apache’s 286/304 degrees. The Variable Cam Timing (VCT) has 37 degrees of variability over the Hellcat’s camshaft timing. 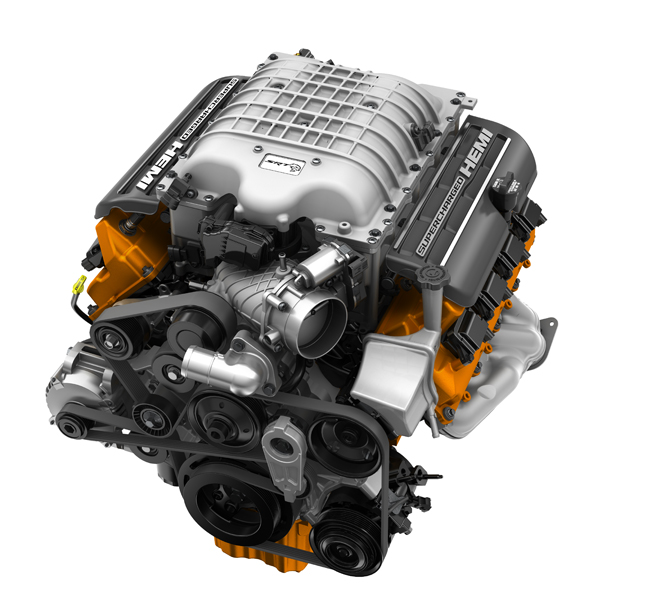 So there you have it, with its conservatively-rated and SAE certified 707 horsepower (rumors place it closer to over 800), The Hellcat engine is not only an unbelievable performer, but the design, engineering, and use of the proper components makes the package one that will not only help survive the rigors of daily driving—and more than occasional abuse, but will definitely raise this engine to the iconic status of its name—Hemi!