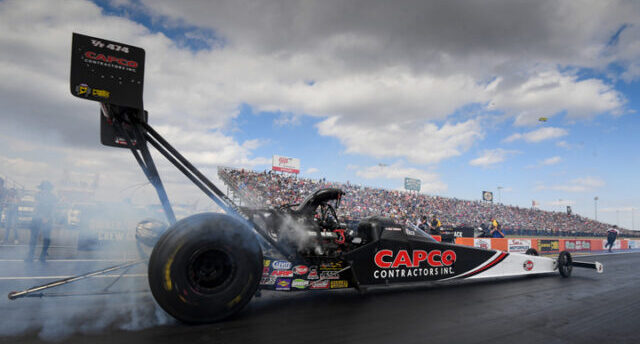 Texan Billy Torrence is having a grand time throwing a monkey wrench in predictions for this year’s NHRA Mello Yello Top Fuel Countdown to the Championship contest. While his son Steve, the reigning titleholder in dragster competition is still leading the standings, Billy’s four victories this year have made him a viable candidate to win it all.

After his victory at home in Texas on Sunday, during the fourth of six races in the Countdown, Billy Torrence holds fourth place points and is less than four rounds behind his son (-71). That’s nothing.

An early departure by Kalitta Motorsports’ Doug Kalitta, beaten in the first round by John Force Racing rookie Austin Prock’s 3.688-sec boomer, Kalitta didn’t lose a lot and is 33 points behind Steve Torrence, while semifinalist and No. 1 Texas Motorplex qualifier Brittany Force of John Force Racing is 46 points back.

It’s fair to say, for the time being and with two races left to run, that these four are the ones to beat. While Don Schumacher Racing’s Leah Pritchett is -104 and tenth placed Clay Millican is 184 points back of the leader, it’s likely those two, together with sixth through ninth-placed Prock, Mike Salinas, Antron Brown and Richie Crampton can stir it up behind the top four and make their moves, but none of them are likely to take down this particular fab four.

In earning his second Countdown race win, Billy Torrence showed that it’s the whole Capco Contractors team that’s capable of winning races. He’s also very, very familiar with the Texas Motorplex track, considers it his home circuit and doesn’t care who’s in the other lane. He’s ready to get them all. First, he disposed of Terry McMillen, then Shawn Reed, finally dispatching Brittany Force in the semifinals to meet rookie Jordan Vandergriff.

While Vandergriff was the quicker leaver, he hazed the tires and allowed Billy Torrence the biggest win of his career and the second consecutive at this track for his family. He acknowledged, “We did have the best car today. We’ve got a great group of guys on both cars and our success is just a testament to the work these guys do.”

Billy Torrence and his family team, who have won the three of the first four Countdown contests, ceding only Reading to Richie Crampton, have little more than a week to enjoy their success before trying for yet another win in Las Vegas the first weekend of November. And then it’s on to Pomona two weeks later, where points-and-a-half are awarded and champions are crowned. Were it up to Billy and Steve Torrence, Sunday night in Pomona will belong to someone in their family – but which one?