IMSA’s Roar Before the Rolex 24 is intended to foreshadow the upcoming Rolex 24 at Daytona, held on the 3.56-mile Daytona International Speedway road/oval course the final weekend of January. The Roar encompasses three days of testing, together with press conferences and pit road/garage location qualifying. During the three-day meeting, IMSA announced three-time race winner Christian Fittipaldi, who retired from driving at this race last year, will be Grand Marshal for the 58th annual Rolex 24 at Daytona.

While the three-day test isn’t mandatory, it does set vitally important garage and pit road locations for all four IMSA categories in the WeatherTech Championship Series: Daytona Prototype International (DPi), LMP2 (where all engines are the same with only slight prototype chassis changes – these cars are eligible to race at Le Mans), GT LeMans sports cars (GTLM may also race at Le Mans) and GT Daytona sports cars (GTD). 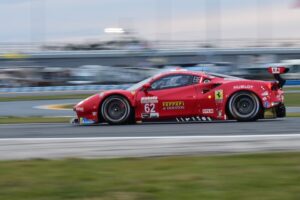 More than 40 attending vehicles and their minimum of three drivers per car were able to experience all number of differing climate conditions, from warm and dry to cold and damp. But that’s the way Daytona Beach is this time of year; last year’s 24-Hour race was plagued with rain from nightfall through to checkered flags and beyond.

One of the mandates IMSA makes for this test is that no one hold back: no sandbagging, as IMSA strives to achieve balance in each class where a variety of car/chassis/engine combinations compete for the same prizes. With the carrot of garage/pit access one would think every competitor would want to make their best showing. But that’s not always the case, as some don’t want to show their hands in early January, only to have a Balance of Performance (BOP) change before this big race that would hinder their forward progress.

Last year’s polesitters, the Mazda Team Joest two-car RT-24P DPi entries were again right up front, with the No. 77 fastest of all, albeit not breaking last year’s Oliver Jarvis-set 1:33.875-sec record that ended PJ Jones’ and Dan Gurney’s All American Racers’ all-time lap-record-holding run after 23 years. That means the first and second garage stalls belong to Mazda Team Joest. Just as they did in 2019.

This year it was Olivier Pla who unofficially broke teammate Jarvis’ 2019 record at 1:33.324 (137.321 mph) at the Roar. Last year Jarvis set a new unofficial record in the Roar and then officially did it in official qualifying for the 2019 twice-around-the-clock competition. With that nosebleed speed, Mazda Team Joest have first choice of garage location and pit stall for this race. Five drivers beat Jarvis’ record-setting speed in these eight practice sessions – what happens officially might be better or, with varying weather conditions, stay the same.

The speed was set on Sunday, as was GTLM’s top garage/pit spot. There were only seven GTLM cars at the Roar, as Ford’s GT program ended at last year’s IMSA season finale, the Motul Petit Le Mans 10-hour race. Now, with two Porsche cars, two BMWs and two Corvettes, augmented by partial-season Ferrari teams – in this case Risi Competizione – the field might be small but it’s filled with interesting, competitive teams. 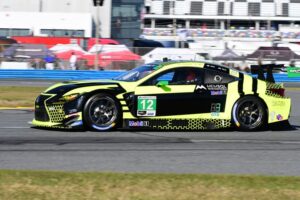 James Calado posted the quickest GTLM time in Risi’s No. 62 Ferrari 488 GTE at 1:42.685 sec (124.803 mph), just a few months after earning victory at Petit Le Mans. Incredibly, Calado beat Porsche driver Nick Tandy by a scant 0.001 seconds as the entire, seven-car GTLM field was covered by less than half a second (0.446-sec). Calado is sure no one in his GTLM category held back in this garage/pit qualifying session. “It’s not like previous years where people would hold back. I think it’s pretty equal at the moment and I think that puts us in good stead for a good race.”

On Saturday, pit/garage locations were set for LMP2 and GTD, with Frankie Montecalvo fastest in GTD in his No. 12 AIM Vasser Sullivan Lexus RC F GT3 at 1:46.754 sec (120.046 mph). Montecalvo shares this car with Townsend Bell for the full season, with Shane van Gisbergen and Aaon Telitz helping out in Daytona Beach. The Lexus had its first run at this race in 2017 under different team management. “With the changing conditions,” Montecalvo said after qualifying first, “I think our car suits this well. The team did a phenomenal job getting the RC F right on track from where we left off last year – and that year of experience really shows for us.”

Later on Saturday, LMP2 laurels went to Ben Keating, who used to run his own team in GTD and is well known for escaping a massive Mobil 1 12 Hours of Sebring fire in his Dodge Viper several years ago. This year Keating is competing in both LMP2 and GTD, so sleep will not be his friend as he races both the No. 52 PR1 Mathiasen Motorsports ORECA 07 and the No. 74 Riley Motorsports Mercedes-AMG GT3.

“It’s pretty exciting, “ Keating said after running the ORECA at 1:38.056 seconds at 130.694 mph. “The car’s been great. Everyone at the PR1 team, they’ve got the car extremely well sorted. The last time I raced an LMP2 car was at Le Mans; it’s nice to get in a car that has had a season or two under its belt to get everything sorted out. All I have to do is hop in and drive.”

One GTD contestant who had to rethink his driving style at the Roar is Kyle Busch, the 2019 Monster Energy NASCAR Cup Series champion who drives for Joe Gibbs Racing in a Toyota Camry. Driving the No. 14 Lexus RC F GT3 with regular driver Jack Hawksworth, Busch has to learn the nuances of sports car racing. “I learned from Jack that correct road course driver etiquette is to not ever be on the outside of another guy, ‘cause they’ll just force you off.” Busch is also learning that good brakes allow you to enter a corner with a heck of a lot more speed than his Cup car.