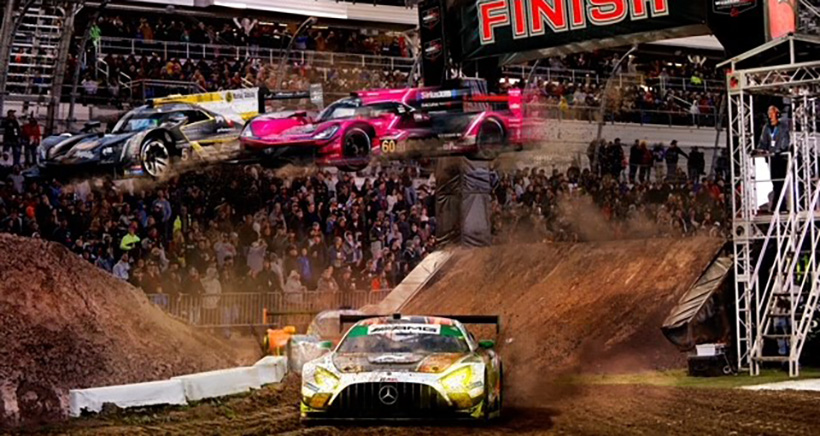 IMSA has new plans for its Roar before the Rolex 24 in 2022. The test session that has been used to qualify racers for a qualifying race for the grueling 24-hour contest will be held, once again at Daytona International Speedway (DIS), but will take on a new, exciting dimension.

Following the lead of NASCAR which, like IMSA, is led by Jim France, scion of the family that began the rise of stock car racing in the United States, IMSA will hold its pre-season test on a dirt track at DIS. The track will be designed by Motorsports Hall of Fame of America inductee Ricky Carmichael, who has designed the course for the annual Supercross event held at the track these past 14 years.

The dirt track will be used for a special 20-minute plus one lap race, featuring all five WeatherTech Sportscar Championship classes. The DPi, LMP2, LMP3, GTD Pro and GTD classes will take the green at 12am ET on Saturday, January 1, 2022. This 20-minute plus a single lap exercise will air live on NBC. Each car’s finishing position in the race will establish its starting position for the Motul Pole Award 100, which is used to establish each car’s starting position in the Rolex 24 at Daytona.

“The Bus Stop is bumpy, sure, but we really want to test the downforce of the DPi class, so we thought a dirt infield section could be the ultimate test,” Carmichael explained. “I’m really looking forward to this new challenge, and providing IMSA with the most grueling race of the year to kick off the 2022 season. It’s going to be gnarly.”

IMSA’s John Doonan, who assumed presidency of the sanctioning body last year agrees with Carmichael: “Gnarly is the perfect term to use for this circuit,” he said. “I mean, what other word would you use to describe a DPi sailing through the air off a triple, a door-to-door battle of GTD cars through the Whoops or a gaggle of LMP2s and LMP3s bouncing through the rhythm section? It’s going to be gnarly and I can’t wait for our fans to see it, either in person at the racetrack or on NBC.”

IMSA, the very serious sports car racing entity in the United States, ended the new item with this: “Tickets for the race will be available at a later date. Actually, they won’t, because… April Fools!”