The future of sports car racing is being mapped and it includes a convergence of technologies between the Automobile Club de l’Ouest (ACO) and the International Motor Sports Association (IMSA), together with the World Endurance Championship (WEC).

As 38 teams prepare for the 58th Rolex 24 at Daytona, the future of the top classes in both ACO-sanctioned events and IMSA competition are being guided by the principle that a top category of sports car racing, LMDh will be guided by rules applicable to both series, so the competitors may take part in the WEC and IMSA’s WeatherTech SportsCar Championship, opening up both series to manufacturers worldwide. 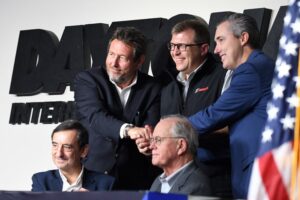 LMDh will carry forth elements of both series’ upcoming regulations, namely the ACO’s Le Mans Hypercar and IMSA’s DPi 2.0. The new LMDh cars will be based on a new chassis common to both ACO and IMSA, using elements of the Le Mans Hypercar and LMP2 chassis, built by the four current LMP2 manufacturers: Dallara, Ligier, Multimatic and Oreca. This chassis will also be used for the next generation of LMP2.

The new chassis, regardless of builder, will use a common hybrid KERS system at the rear axle and be mated to an internal combustion engine (ICE) approved for competition. The silhouette and design is slated to be modifiable, developed according to the brand or style of the affiliated manufacturer providing the ICE for the car.

More of the technical details for the upcoming car will be unveiled during SuperSebring this March, with a presentation from both IMSA and ACO technical departments. Using a balance of performance system (BoP) to enable fair competition, the top category of endurance racing includes both LMDh and Le Mans Hypercar.

Fillon noted the announcement “is the crucial starting point for a joint endurance racing future… and is a great success story for endurance racing. A manufacturer will soon be able to compete in the top category of two championships and we can’t emphasize enough how many opportunities this long-term sporting and marketing vision will open up.” 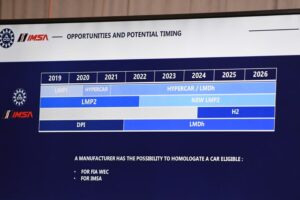 Mr France, who governs both IMSA and NASCAR at the present time and is the scion of the France family that enabled both series to arrive and thrive stated, “When my father, Bill France Sr. brought the first Daytona Continental sports car race here to Daytona International Speedway back in 1962, he wanted to bring together sports car drivers, teams and manufacturers from around the world. With the ACO, IMSA and manufacturers aligned, today’s announcement proudly takes my father’s vision to the next level.”

“The big winner today is endurance racing,” declared Neveu. “The door is now opened to many additional competitors to compete at the highest level on both sides of the Atlantic with the same car,” which will allow sports car racing to grow exponentially. The WEC LMDh/Hypercar convergence begins in September of 2021; IMSA’s adoption of these new rules takes place two years from now at the 2022 Rolex 24 at Daytona, the race’s 60th running.

New IMSA president, Doonan, who moved from the manufacturer side as manager of Mazda’s racing programs to head IMSA, has only been on the job for about 90 days. He credited predecessor Scott Atherton for beginning the project along with Jim France and explained, “We are grateful for the collaboration with our partners at the ACO and the open dialogue with our manufacturer partners that led us to today’s introduction of the LMDh platform. Providing a common platform for top-level prototype racing globally has been a goal for the sanctioning bodies, our manufacturers and, most importantly, sports car racing fans everywhere, for many years. We are proud to say the opportunity has finally arrived.”