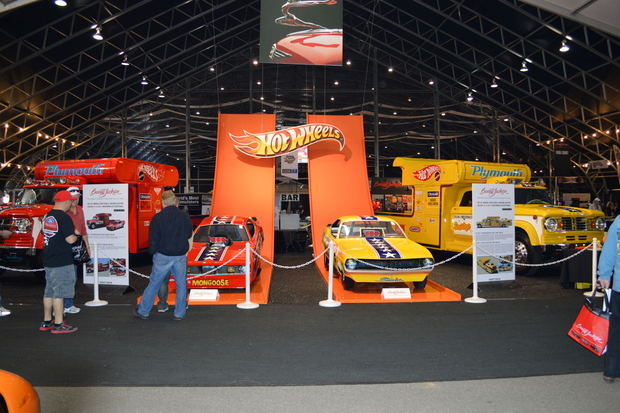 Auction fever was in the air at Scottsdale this past week. Not only was the Barrett-Jackson auction in full swing, but other events like the Gooding & Compay Collector Car Auction, Russo & Steele collector auction, and Bonhams Scottsdale Sale were drawing visitors from around the country.  But Barrett-Jackson is the crown jewel, a legendary chance for enthusiasts – spectators, press and bidders – to come see classics and showpieces on display and on the block.

The auction kicks off with an opening night gala where several cars are auctioned off for charity and proceeds from there.  In addition to the bidding on display by those willing to pay $500 and provide a letter of certification from the bank, there are booths and exhibits by manufacturers in performance and restoration. GM and Ford both held ride and drive events as part of their event sponsorship, offering visitors a chance to do a hot lap in an auto cross course with a professional driver in a 2014 Bondurant C7 and the choice of the Shelby Mustang or the Boss powered Hoss.

But the vehicles, and the bidding, are what it’s all about – fast talking auctioneering of classic, mostly no-reserve cars and breathless anticipation for what the vehicle will go for – market value, astronomical mark-up or a disappointing goodbye to a beloved piece of nostalgia.  Not every dream has an equivalent buyer – take the 2013 Chevrolet Camaro CRC Copo built to NHRA specs with the Gas Monkey decals and featured on Fast N’ Loud. It went for less than $100,000 before the dealer commission, while a series of Corvettes all easily broke the $100K mark.

The vehicles are lined up in stages so that potential bidders, and curious spectators, media and other guests, can examine them (the $500 fee for bidders guarantees you a chair for your butt close to the auctioneers as the car roles across the stage, and the letter from your bank says you’ve got the cash to make good on your bid). The starting bay is filled with the sounds of revved engines, shuffling feet, and staff yelling at hapless pedestrians to move out of the way of an oblivious golf cart or a determined auction vehicle.  Staging is the fun part. The cars are out, lingering like antsy nags before a big race, and at that point, anything can happen.  And it usually does. Once the car enters the building and is pushed across the stage, it’s all in the hands of the auctioneer and the trusty, talented spotters.

Sure, there are other things going on throughout the day. But the bull riding exhibition, multiple Snake and Mongoose screenings,  Don Prudhomme autograph signings, celebrity sightings, vendor and dealer offerings, live entertainment, food, booze, and sunshine are all just flourishes – sweet icing on the big car cake.

Barrett-Jackson is a draw because it’s a dream.  All of these cars, just a signature away. So, without further delay, on to the cars:

About Andreanna Ditton 190 Articles
Andreanna Ditton is the Content Manager for MotorHead Media and the Editor-in-Chief for RacingJunk.com/news. She's been working in the automotive publishing industry since 2007 focusing on racing and performance for motorcycles and cars.