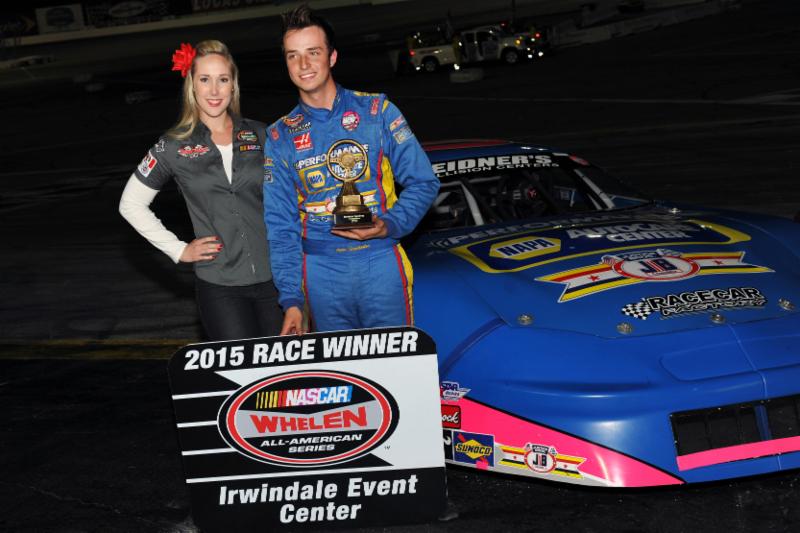 Irwindale, CA., May 16 – Five series ran six entertaining main events Saturday during the annual “Armed Forces Appreciation Night” at Irwindale Speedway. Trevor Huddleston and Toni Marie McCray battled each other in both of the featured Seidner’s Collision Centers NASCAR late model twin 30-lap mains and split the victories. The late models ran on the half-mile and were the first and fifth races of the evening.

A season-high 22 late models raced in the first main. During slow parade laps, all 22 drivers held American flags on poles out their side window in a pre-Memorial Day tribute. Grand Marshal was U.S. Marines Cpl. Carl Hurstine, 89, from San Dimas. He and his family rode slowly around the track in a classic 1930 Lincoln L open model owned by Loren Burch of Pasadena. The car has been in two Pasadena Rose Parades since it was found and restored. Military vehicles also paraded around the half-mile prior to the first race at 7:15 pm.

1st LM 30: Fastest qualifier Huddleston, 18, started from pole position and led the first 20 laps. Sixth starter McCray led lap 21 after executing an inside pass leaving turn four. Huddleston re-passed her a lap later on the outside and took charge for good. He won his second late model feature of the season in his dad Tim’s No. 50 Racecar Factory-built High Point Racing Chevy by ten yards (0.579) over McCray. 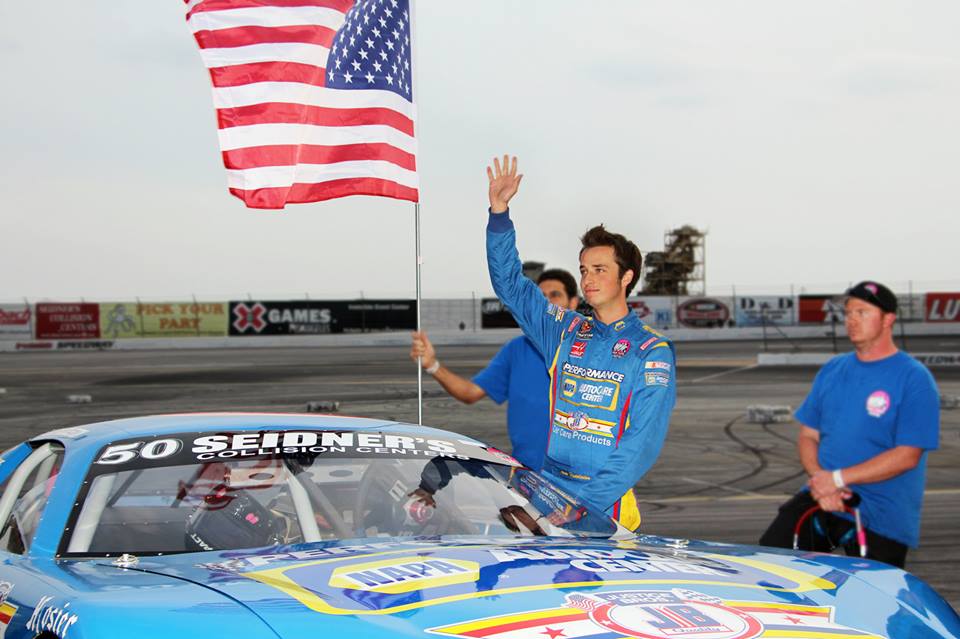 The race, which took 54 minutes, was red-flagged for 20-minutes after a serious-looking crash on lap 21. Contact between the P. 3 car of McCray and Christian McGhee’s second place car got McGhee’s No. 71 Chevy airborne briefly. It slammed into the turn two wall at a 45-degree angle at speed. The car incurred heavy right front damage and slid towards the infield at the second turn exit. Flames shot from the RF and under the hood from a broken oil line. Oil drained across the track ablaze. McGhee climbed from the car to escape the fire and sat on the track away from his car.

Track fire crews arrived quickly and extinguished the stubborn car fire and oil fire draining across the track. The ambulance crew attended to the rising teenage driving star and 2014 rookie of the year. He walked into the ambulance and was transported to Arcadia Methodist Hospital along with his car owner father, Loyd. He was medically examined and released early Sunday, according to a reliable report.

Two other incidents during race one caused lengthy yellow flags after meetings with the crash-wall. On lap 8 three cars running in position 12, 13 and 15 spun together and all backed left rear first into the third turn wall. Drivers Jeff Williams, Nigerian-born US Naval officer Jesse Iwuji, 27, and Val Cummings escaped injury. However, all three cars were sidelined for the night. Billy Helgeson was in P. 6 on lap 18 when he exited to the infield with a fuel pickup problem. He corrected it and started the second main.

On lap 18, L/M rookie/USAC midget veteran Jarid Blondel, 19, was running in a strong fifth position after starting the tenth. A lapped car in the groove caused him to brake hard entering the first turn and his LR end backed hard into the crash-wall. The car was eliminated for the night. Blondel accepted a generous “start and park” offer to drive Ricky Schlick’s back-up No. 51x Chevy in the second 30-lap race. He was credited with points for taking the green flag and parked the car in the infield during the initial lap. In the first 30, Schlick started inside row two but said he “missed a shift going from first to second gear at the start”. He dropped to 14th position on the opening lap and finished 14th.

M. Johnson, Helgeson, rookies Herbst and Price, and veteran Rayburn completed the top ten spots. Sixteen of 18 starters finished with 15 on the lead lap. Perkins was in P. 6 on lap 18 when a piston or connecting rod blew two holes in his engine block as he approached the first turn. Oil got on his tires and caused his wild spin up the progressive banking. His car just missed the crash-wall, but will require a new engine to race in the next series race on June 20.

LEGENDS 35: An 18-car INEX Legend Car field had eight rookies racing on the third-mile this week. The race had three leaders and three lead changes. Pole starter Chad Schug led the first four laps before second starter Jordan Hyland made an inside pass at the starting line and paced laps 5-12. Fast timer/third starter Darren Amidon took second on lap 10 with a strong inside move entering turn three. He then used a similar move on lap 13 at turn four to assume the lead. Cruising in the lead on lap 24, Amidon spun out on his own in turn two and lost four positions before continuing at speed.
Schug took second spot from Hyland on lap 18, so he became the leader from lap 24-35. Hyland finished a career-best second (-0.362). Teenage rookie Parker Steele, from Peoria, AZ, started fourth and finished an impressive third, 2.419 seconds off the lead. Mark Iungerich and Amiden completed the top five as ten drivers (including four rookies) completed all 35 laps. The all-green flag race took 9:47.389 and averaged 71.431 mph. Hyland ran the fastest race lap of 16.470 (72.787 mph).

BANDOLEROS 20: After afternoon rainfall canceled Friday’s “bando” event, the only INEX Bandolero race was a 20-lap main for seven youngsters, ages 8-15. Austin Edwards, a 10-year old newcomer from Mentone (Riverside County), started fourth. He traded the lead four times with second starter/second generation driver Allison Gay, the laps 1-8 and 10-16 leader. Edwards drove the No. 18 bandolero raced last year by Johnny Dressler, a current Legends rookie. Edwards led lap 9 via his outside pass in the third and fourth corners. Gay, the daughter of racer Danny Gay, went low in the first turn and retook command on lap 10.

Edwards, who loves animals and volunteers at a Yucaipa “no-kill” animal shelter, led the final four laps and won by 0.438 over fast timer Mckenzie Eshleman. He became the third consecutive first-time Irwindale bando feature winner this season. It was his third feature victory this year at three tracks, including triumphs at the Las Vegas “Bullring” and at I-95 Speedway in Bullhead City, AZ.

Eshleman, who is the granddaughter of the former mayor of Fontana and race team owner Dave Eshleman, earned the pole for setting fastest qualifying time. She spun out on the first lap in turn four and had to restart at the back. She charged forward quickly and took second from A. Gay on lap 19 with an inside pass in the fourth turn. She closed rapidly on leader Edwards, but he held her off by five yards. A. Gay, Zack St. Onge, Jesse Bower, Kayla Eshleman and Madison Gay followed. The top six finishers completed all 20 laps.

ENDURO: A field of 26 four-cylinder compact cars used four rubber tires and raced in a 30-lap enduro race on a six-turn “R-oval” course that used a portion of the third-mile infield for two turns. The race had a break after lap 15 to facilitate a driver change for cars using two drivers. Seven drivers drove solo all 30 laps. Race Director Mike Atkinson used a standing start going counter-clockwise for the first 15-lap segment. Drivers had to start the final 15 laps in their running order and race in a clockwise direction. The No. 32 orange Honda Accord started in row one and led the first ten laps, but the LF wheel came off at an infield turn, parking the car for the night.