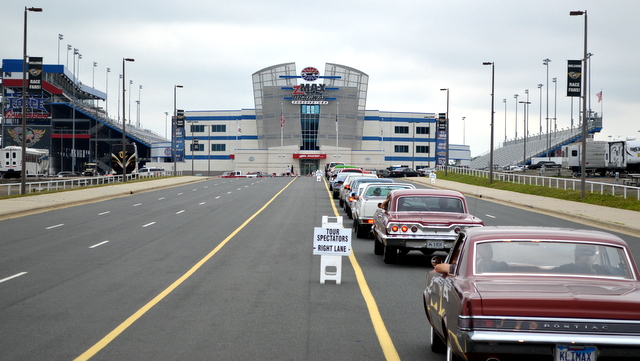 The 2014 Hot Rod Power Tour got off to a roaring start at the zMAX Dragway near Charlotte, North Carolina with perfect weather and a huge turnout of cars and spectators.

For those that don’t know, the Power Tour is a rolling car show made great by gear heads who just want to have fun and enjoy their love of all things automotive. My favorite people in Charlotte have to be these two guys with a real working grill fashioned after a blown big block motor!

There was so much to see and do that is was difficult to decide where to start. The Racing Junk/Motorhead Media booth always had a crowd of people signing up to win a 2014 Chevrolet Silverado that just had a Magnuson supercharger installed by the talented crew at JHR Performance.

Vic Edelbrock greeted fans at the Edelbrock booth, where they showcased the new C7 Corvette supercharger and a cool Chevy stationwagon nicknamed “Gold Member,” which we saw being built during their annual shop tour.

Legendary NASCAR engine builders Doug and Robert Yates were also on site to sign autographs and chat with event goers.

And of course, there were cars, cars and more cars!

Be sure to check back each day as we keep you updated on our “long haul” during the 2014 Hot Rod Power Tour.