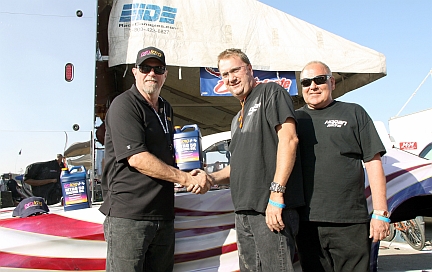 The Boise-Bakersfield Blitz is a four-race points-earning series for AA/Funny Cars during the 2013 season. The series began on April 26 – 28 during the NAPA Auto Parts Ignitor at Firebird Raceway in Eagle, ID, then moving on June 15 to the Auto Club Famoso Raceway. The third race was be held during the Famoso Raceway’s Saturday Night Nitro Shows on July 13 in McFarland, Calif. The fourth and final dramatic race was at the 42nd Pepsi Nightfire Nationals at Firebird Raceway on Aug. 8 -11.

Points were awarded based on qualifying for each of the four events. The winner is the one with the most points tallied by the end of qualifying at the Pepsi Nightfire Nationals.

“It was an exciting series and we plan to participate in the 2014 Blitz,” said Jon Apogée, General Manager: Domestic Sales, Marketing and Motorsports, Prolong. “Prolong products are ideal for Blitz participants. Our Nitro Racing Oil has a diluting effect on oil, which helps maintain oil pressure throughout the run.”