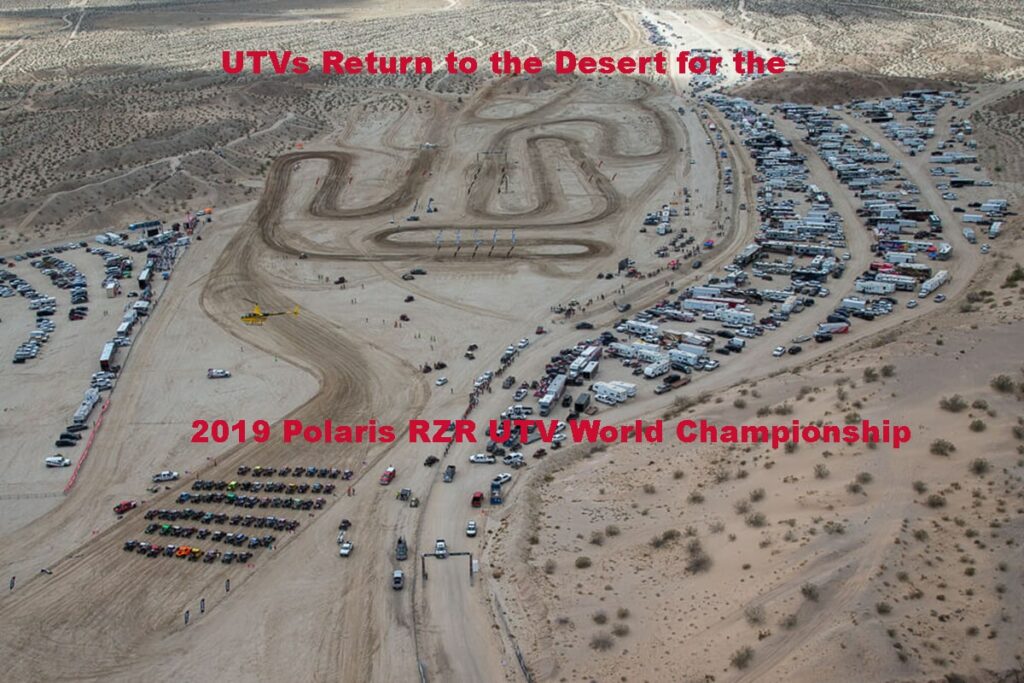 UTV racers from all over returned to the desert outside Laughlin, NV for the 2019 Polaris RZR UTV World Championship April 4-7. More than 400 teams showed up to compete in Short Course, Desert Course, and the Youth Race. The first two three-time World Champions in the five year history of the event were crowned this year.

The second race of the day on Friday, the 250cc Youth Race, saw Dallas Gonzalez become the first-ever three-time champion since the Polaris RZR UTV World Championship was created in 2015.  Jacob Peter and Clayton Mickels followed Gonzalez across the line in the Youth 250cc race. Gonzalez followed his Championship performance in the 250 class by winning the Youth 570cc Class Championship, beating siblings Hailey and Riley Hein.

The race format for the 170cc and 250cc races had the racers on the UTV World Championship infield course for 30 minutes. The afternoon’s Youth 570cc race had the riders stepping up to the larger seven mile length short course that would also host most of the racing seen on Sunday. There was a combined total of 93 entries in the three Youth Classes, making it the largest group of entrants in this year’s UTV World Championship.

UTV World Championship CEO Matt Martelli said “The youth teams that compete in the Polaris RZR UTV World Championship represent the future of the sport, and judging by what we saw today, the future is bright. Dallas Gonzalez managed to do something even the pros have never done with his three-peat in the 250 class, and backed it up with another win in our first 570 race, while Chase Mankin earned the 170 win in another great battle. Congratulations to all of our youth competitors who finished, and good luck to the teams taking on the Youth Pit Crew challenge (more on that later) later today!”

The only entrant in 300 A, Curt Fackrell, riding a KTM failed to finish the race. Open A had five entrants, three of which failed to finish. Anthony Monachelli of Fenley, NV led Brock Collins and Chris Dostal, all driving Hondas to the win with a winning time of 3:12:48.488.

Driving a KTM, Daniel Markley of Victorville, CA was the only finisher out of two entrants in 300 E. Open E had four finishers with Jaxon Bogh (Honda) of Hoghland, Utah being trailed by Ryan Parszik (Yamaha) and Travis Wells (Honda). Bogh had a winning time of 3:13:06.138. Mason Klein of Agua Dulce, CA was the only entrant in 300 P and he crossed the finish line with a time of 3:17:19.731. 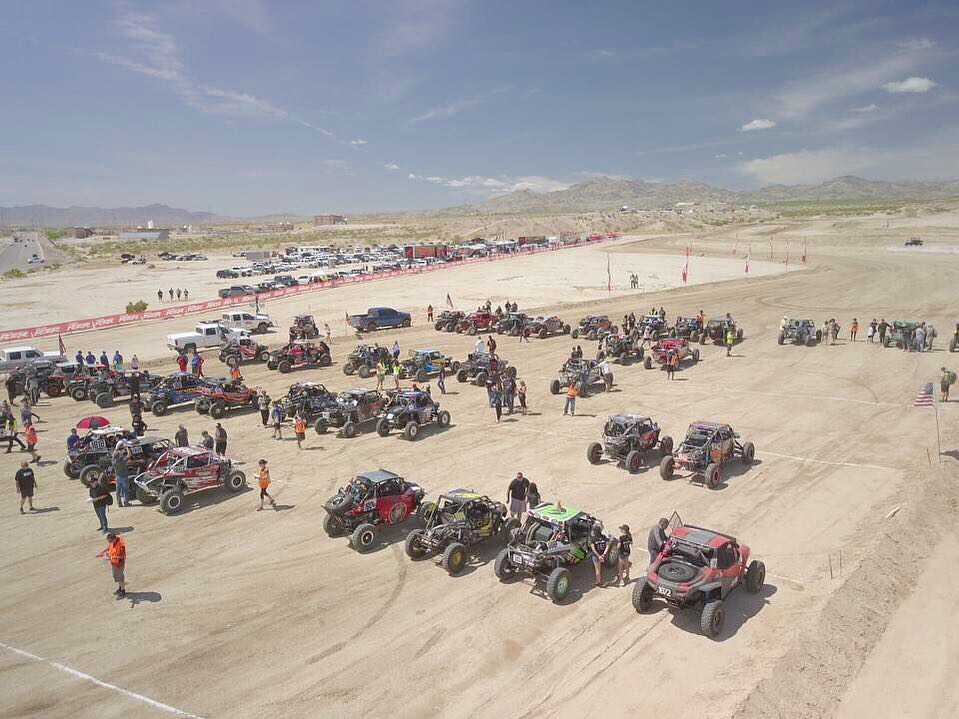 All seven Open P entrants finished the race, although fifth-place finisher Wyatt Brittner received a penalty. Heber City, UT’s Danny Cooper drove his Honda to a winning time of 3:06:55.301. KTM drivers Skyler Howes and Jeff Trulove took second and third places, respectively. In IM A Dean Hawley of Mapleton, UT drove his Kawasaki to a winning time of 3:31:30.95, followed by Kyle Saraceni driving a Honda in second and in a KTM, Christopher Horel. 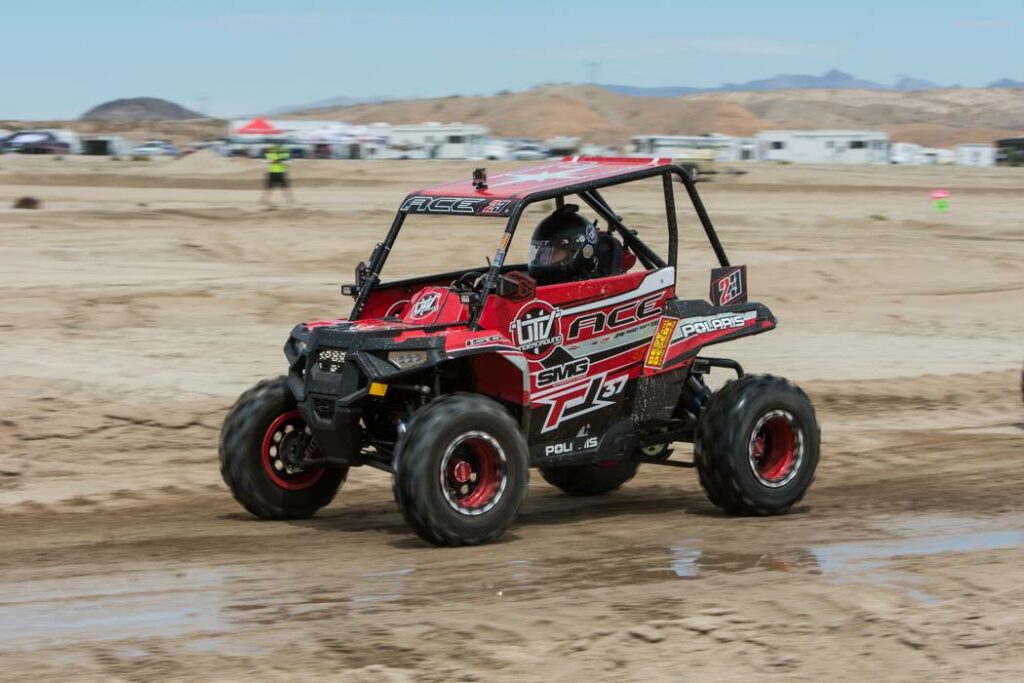 In IM E, 3:15:13.338 was the twinning time of Parker, Colorado’s Yamaha-driving Warren Healey, more than 12 minutes ahead of Alex Kortepeter in second and third place Colton Scudder. Riding a Suzuki, Chuck Borges from Maricopa, AZ took Quad E with a time of 3:13:53.600 with Bill Pierson and Tovia Lowry garnering second and third place honors. Quad P and Quad IM A both had solo entrants, Erin Simmons in P and Charles E. Gimbal in A.

Brandon Sahlistrom of Topock, AZ was the only Quad IM E finisher with his Yamaha. O-30 E had two finishers, Rhett Ogden from Vegas in a KTM and Carl Gruenewald with a Husqvarna. Hawthorne, CA’s Doug Clark was the sole O-50 E entrant on his Husqvarna. UTV P (NA-Normally Aspirated) was one of the largest classes of the day, although around half failed to finish. The class was won by Seth Quinteros of San Marcos, CA. driving a Polaris in 3:34:52:457. This win was Seth’s third in three races following wins in the Parker 425 and the Mint 400. Mike De Ley was second while Dan Kaatz closed out the podium.

o-30 P, another single-entrant class was won by Henderson, NV’s Carl Maassberg in 3:18:48.501.  All driving Can-Ams, Brett Comiskey, Michael Isom, and Jeramiah Drew took the top three positions in UTV Unlimited. Cameron Meister (Can-Am), Brook Jensen, and Mike Heller (Polaris) were the sole survivors of the four-entrant UTV Sportsman. UTV Rally was another class with a runaway winner with Justin Bor of Lincoln, CA’s 2:08:08.324 in his Can-Am putting him more than seven minutes ahead of his closest competitor James Hill with Kyle Slater another minute back.

Sunday was the day the five production classes took to the short course. Brayden Baker from Anaheim Hills, CA beat Cadence Cowan by less than a minute in 1:12:00.596, in UTV Production 900 with Brook Lynn Deman in the field’s only Can-Am coming in third. Cody Wemple from Hemet, CA, Shelby Anderson, and Sierra Romo put on an awesome show in UTV Production 1000. Cody’s 1:09:53:734 gave him a margin of victory of less than 27 seconds.

UTV Production 700/800 was won with a winning time of 1:06:24:764 by Mikey Kelly from Anaheim Hills, CA with Lucas Johnson and Faith Lyons filling out the podium. UTV Production Turbo saw Cody Miller from Greenville, TX, Kyle Chaney, both driving Can-Ams, and Jacob Carver driving a Polaris put on the best show of the weekend. Cody’s time of 1:04:13.285 gave him the weekend’s smallest margin of victory of just over eight seconds. 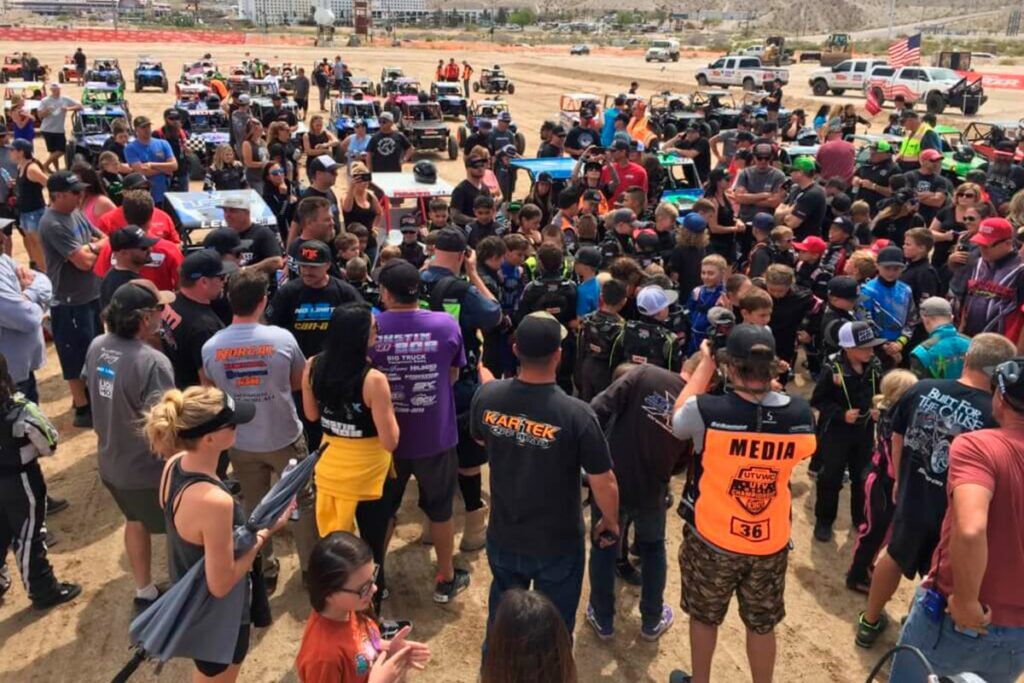 Awesome racing in the desert wasn’t the only entertainment on tap for the championship weekend. Before the racing kicked off on Friday, the Dirt Co. Poker Run gave fans the chance to take their pre-runners and some other personal vehicles onto the course in the morning to experience what the competitors would be facing during their races.

Martelli said “The first day of the Polaris RZR UTV World Championship is always a ton of fun. The Dirt Co. Poker Run is a great way for our fans to share our race course with our drivers before they do battle this weekend, and we’re always excited about the turnout for that. But even for the folks who didn’t head out this morning, the AZ West UTV Festival has plenty of exciting opportunities to check out new products, and get involved with the sport. There’s no better way to lead into UTV racing’s premier event, and one of the most exciting off-road race weekends of the year!”

The AZ West UTV Festival, where fans could browse products from dozens of the top brands in the sport kicked off Friday morning. Wrapping up the Festival Friday evening was the Pit Crew Challenge presented by The Fab School. 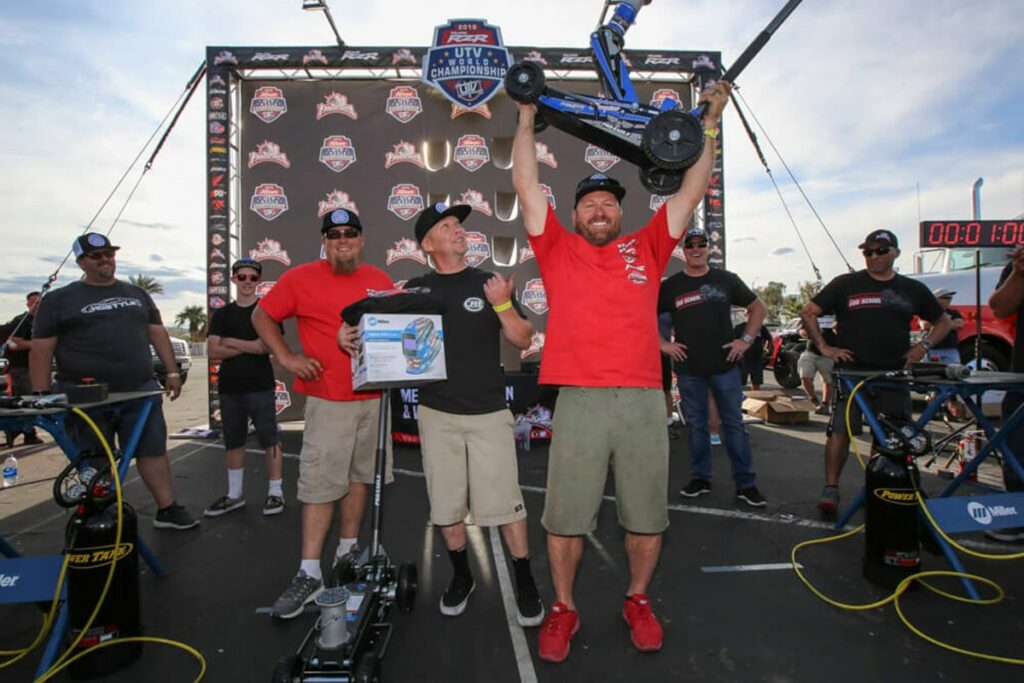 The Pit Crew Challenge had youth and pro pit crews competing in a two-tire pit stop for prizes that included a custom Pro Eagle jack, a welding helmet from Miller, vehicle lighting from Baja Designs, and prizes donated by event sponsors, The Fab School and the UTV World Championship. 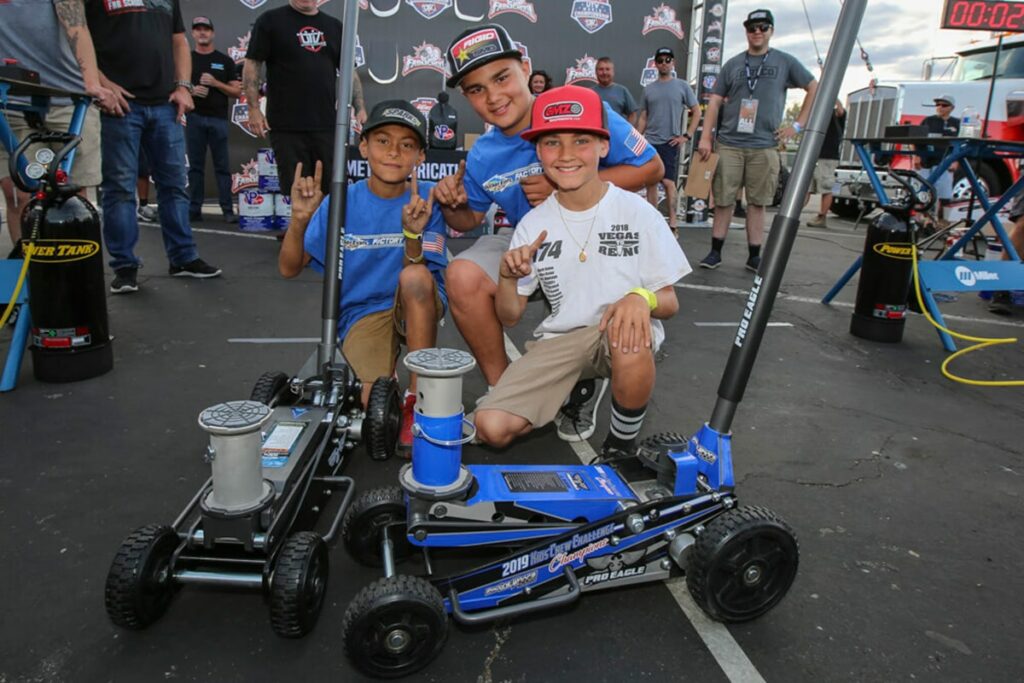 An amazing time of 42 seconds was all it took for Team Hostyle to defeat their closest competitor out of seven Rancho Racing. Team Hostyle never had a time slower than 44 seconds throughout the competition. The Youth Pit Crew Challenge was won by Team GSP who earned their title by beating Team Soccer Moms.