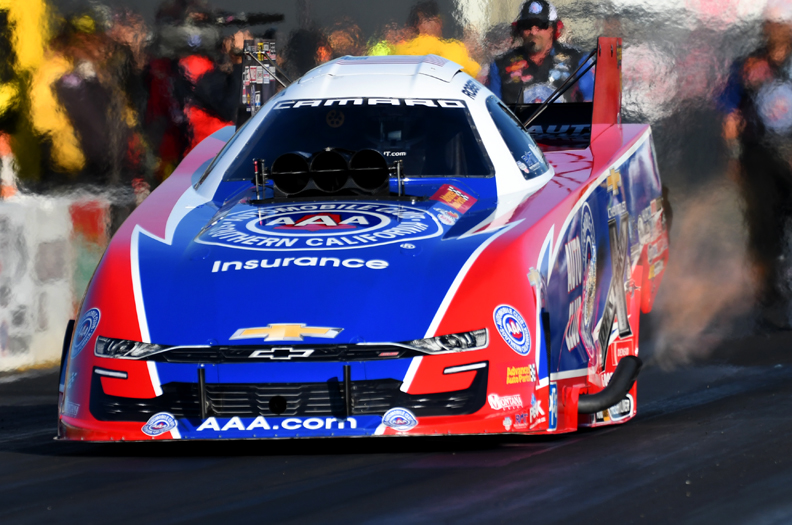 In between NHRA Mello Yello races, many nitro teams like to test. Some stay after an event to try out different parts while they’ve still got tents and haulers set up to accumulate data and prep cars between rounds; others go to match-race events to work on their skills in anticipation of the next NHRA event.

Quite a few racers test themselves at Summit Motorsports Park’s Night Under Fire, the 42nd edition of which occurred the weekend of August 9-11. Included among those attempting to earn victory were the two John Force Racing (JFR) Funny Car entries, who currently occupy first and second places in this year’s points standings.

Team owner John Force, replete from his 150th career Funny Car victory earned in Seattle a week earlier and Robert Hight made their way to Norwalk, Ohio to build on their momentum. Force brought out a special black-and-white PEAK Coolant Motor Oil Chevrolet Camaro SS and noted he appreciates the tradition inherent in this contest: “Racing at Norwalk for the Night Under Fire event, well, it’s become a tradition,” the 16-time Funny Car champion said.

“It takes me back to the old days, when I first started. The match racing, it’s where it’s at. It reminds you of where you came from,” said last year’s Night Under Fire winner, who prevailed over son-in-law Hight. Hight earned his 50th NHRA flopper victory in Sonoma the week before Force claimed his 150th Wally trophy. 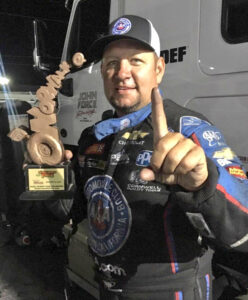 The duo impressively flexed their muscles during the nighttime event. Robert Hight earned his fourth Night Under Fire victory with a 3.91-sec run down the 1,000-foot dragstrip, this time against John Force Racing’s fiercest nemesis, Don Schumacher Racing’s Ron Capps, whose 3.96-sec pass didn’t cut the mustard. Hight’s victory marks the fourth straight occasion JFR has won this event, after John Force won in 2018, Hight took the 2017 trophy and Courtney Force earned the 2015 victory. The 2016 contest was a rainout.

“I always love coming and racing here at Norwalk for Night Under Fire,” Hight exclaimed. “It’s a good time, there’s always a huge crowd and this match race has been good to John Force Racing. “Bader really does it up right, the entire day is a celebration and the finale with those fireworks? What a way to end it!

“Coming off the Western Swing last week and heading into Brainerd this week, it makes for a solid five weekends of being in the car and I think it’s a good thing,” Hight continued. “We keep our momentum, get to test a little bit and keep our focus right before the NHRA Countdown to the Championship.”

Two-time NHRA Funny Car world champion Hight has led the category’s points standings since the season began at Pomona in mid-February. He’s earned five victories in seven final rounds and picked up No. 1 qualifiers in these 16 races. John Force has hounded him throughout and now lies 186 points behind Hight.