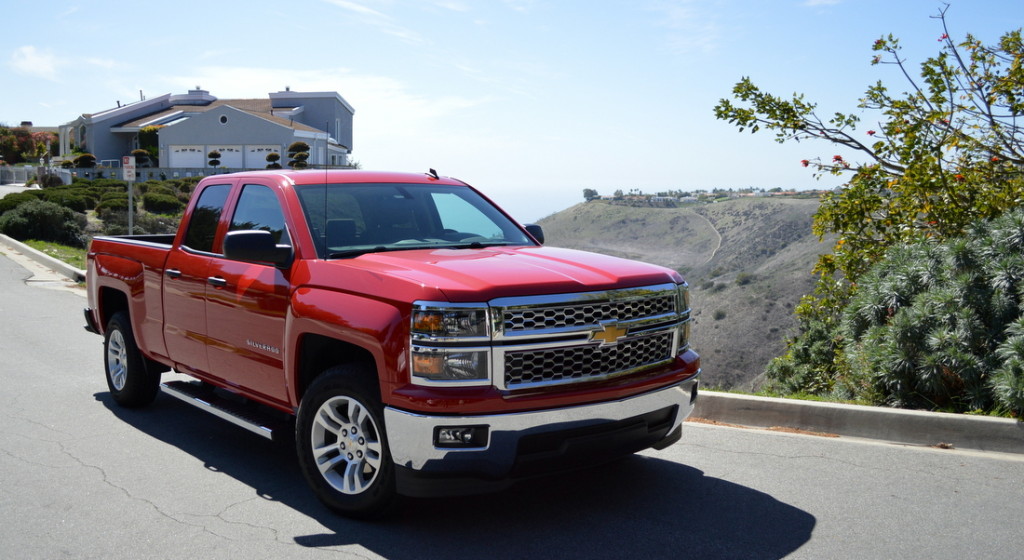 When they came to take the Silverado back, I was tempted to hide the keys.  In fact, if the fine folks from the Press Fleet hadn’t been so timely, I’d have been awake enough to hide the keys, sustain plausible deniability, legitimately forget where I hid the keys, and conveniently be out when that phone rang. Yeah, yeah, multiple other well-established media outlets need to test drive it. Blah Blah blah. Sue me. After a week of driving Clifford, the big red truck, I had re-embraced my country girl roots and was ready for the cowboy hat and the horse trailer to accompany the ride.  I spent a lot of time growing up in Wyoming and Colorado wanting a horse and a truck to trailer.

The 2014 Chevrolet Silverado we drove was affably mid-range: a 4.3L V6 ECOTEC3 with the LT package, 2WD, sporting an extended cab and roughly 6000 lbs of towing/hauling capacity.  For the urban dweller (like myself) who spends a whole lot of time cruising freeways as opposed to back roads, that suited me just fine.  Being up high, driving a truck with power and stability made me feel like queen of Los Angeles traffic. However, I’m probably not the target audience anymore, largely for locational and vocational reasons.

The truck looks like a truck. It’s reminiscent, inside and out, of Silverados of the recent and more distant past. Its edges have been slightly smoothed and rounded, but it’s still plenty boxy in a good way – you know you’re driving a Chevy—and the interior is a step up from Chevy’s past. It still feels like a GM, but there are small touches of luxury in the steering wheel, materials, ergonomics, stitching, etc.  The front seat converts into a bench seat for a potential third person that you like a whole lot, or a cooler that you don’t much need to have feelings about. Alternately, it can be used as additional locking storage for trips or work.  The integrated trailer brake controller is near the other switches and knobs by the steering wheel.  The double cab rear is fine if you’ve got a couple people who don’t need to go very far, but I’m not sure I’d recommend it for longer trips. Invest in the crew cab if you’ve got kids or bigger folks who are going to ride in the back.

I’d like to say that we were able to enact an elaborate plan of towing, hauling, obstacle coursing and off-roading while we had the vehicle, but mostly, The Burnout’s adventure with the Silverado centered more around adventures in parking.  The excellent rear vision camera made backing up easier than one would expect, but there’s still the element of fitting that much truck into parking spaces and parking garages designed more for the small performance sedan than for a working truck.  My neighbors grew visibly pale as I parallel-parked the truck on our slim urban streets, their Lexii and VWs and Prii at risk of my own burgeoning skill set.  To be fair, I never hit any of them. To be equally fair, I came awfully close. But it was really the parking garages that got me.  I came to know the clearance of every garage in a 15-mile radius, and parking alternatives on the ones that didn’t seem to accurately reflect what I considered optimal overhead space. One of my main sources of amusement became scoping out the cross-beams in the garages that showed evidence of people who’d played the “guess how high my clearance is” game, and lost.

The clearance issue was actually the one feature our office found fault with. The coalition of Ford fans and Japanese performance daily drivers decided that the truck felt too low for a big truck or too high for the city.  As the lone dissenting voice, and longest-term driver, my vote was that they’re all crazy. However, if you live in a parking-garage free zone, a variety of lift kits are available that could fix that.  The too-high issue, well, it’s a truck! And there’ll be different clearance issues – good and bad – with the 4WD.

However, parking challenges aside, the Silverado proved an adept and surprisingly charming urban vehicle. The automatic V-6 was zippy and responsive on both city streets and highways, nimble for a bigger truck, and relatively fuel efficient due to the EcoTec3’s ability to shut off two of the cylinders at cruising speed to save on gas. We ran the Silverado all over Los Angeles and it’s environs – to the suburbs and bedroom communities, to the beach, the hills, to the Valleys, and a week of hard effort and long miles resulted in just a single tank of gas. Sure, the tank has a 26-gallon capacity, but that’s still pretty good for what we accomplished, and it far outshines other trucks I’ve driven in efficiency. It gave us 25 mpg average, 30 mpg max, close to GM’s numbers.

The truck is quiet, amazingly so – which allows for a very satisfying bout of singing along to Willie’s Roadhouse on the Sirius XM.  This is true both as a result of the special laminated glass that eliminates outside noise, but also stems from the quiet ride produced by the engine and the stability of the truck itself that keeps vibration and road “wriggle” out of the cab.

The suspension is equally solid. It was smooth and capable on the circular on-ramps of L.A. freeways at a decent speed with minimal body roll, and the acceleration and steering response is just right; not too heavy or light, and you can still feel the road through the 17” wheels and large tires.  Overall, we felt like it drove better than any truck we’d experienced so far.

As a result of those miles, we were also able to test out some of the snazzier features like the hill-assist (mostly in parking, again, due to some of the challenges of a big vehicle on tiny Silverlake twisties.) The hill-assist felt like a welcome cheat to someone used to driving a manual transmission, and the benefit of it on steep inclines with a trailer, or a flatbed full of dirtbikes is readily apparent.  We also enjoyed the enhanced offerings– Bluetooth capability, the aforementioned Sirius XM radio, OnStar – and those that come standard, the remote keyless entry, the storage space, the EZ Lift and Lower Tailgate (a feature one of our RacingJunk.com ad sales reps, Jim Sweener, was positively ecstatic about, so much so that it took us a while to realize that it simply means being able to open and close the tailgate with one hand), and the cornersteps on the rear bumper which made a big difference when hauling suitcases, bags, or a particularly unwieldy set of lighting equipment out of the bed (we assume it works equally well for tools, tie-downs,  ladders and work boxes).

When it comes down to it, the truck was a satisfying, surprisingly enjoyable ride with great gas mileage, a big engine, the ability to tow a boat or trailer with the standard V-6 made easier by the stabilitrak-stability control with trailer sway control. It works as an urban truck if you’ve got a sub-urban home to park it in, driving wise, but it’s almost wasted in that capacity if one doesn’t have to normally race, haul, camp, or go to a job site.  It’s a lot of truck just to help someone fulfill a cattle baron fantasy, but I’d be happy to give it a shot if it turned up on my street.

The base 2014 Chevrolet Silverado retails for $25,575 standard, although the 1500 2WD LT model we drove would come in closer to $33,785.  It also comes with a 5 yr/100K mile Powertrain warranty, scheduled maintenance, tire rotation, and 24 hour roadside assistance.

About Andreanna Ditton 229 Articles
Andreanna Ditton is the Content Manager for MotorHead Media and the Editor-in-Chief for RacingJunk.com/news. She's been working in the automotive publishing industry since 2007 focusing on racing and performance for motorcycles and cars.