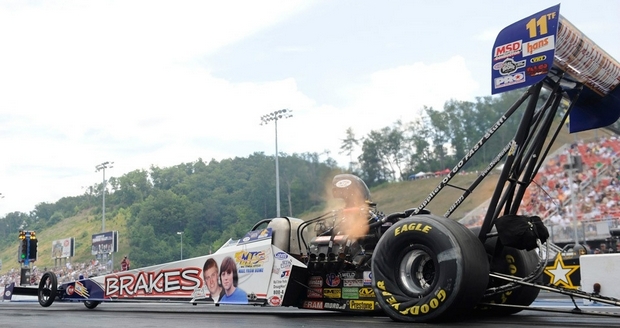 Doug Herbert is a household name in the Carolinas. He’s a drag racer at heart with an even a bigger heart for giving.

Herbert heads into the upcoming 4-Wide NHRA Nationals wishing he were part of the Top Fuel series, but without the proper funding for his racing operation, he remains on the sidelines.

There’s nothing he wouldn’t do in hopes of reaching corporate America and thus find enough funding to get him back on the track.

“I actually have a couple of sports marketing agents beating the bushes now and trying to find sponsors,” said Herbert. “We just haven’t found the right partner to be on the race car and going out and doing what we’re doing. 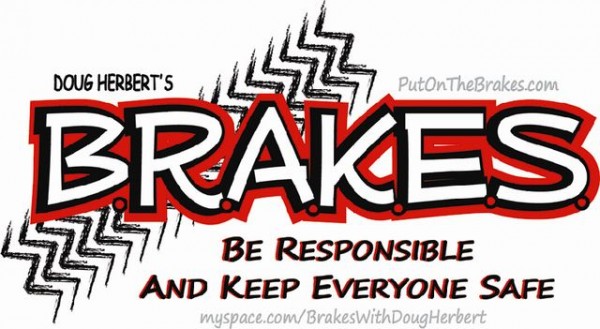 “It’s all because I want something that would tie-in with B.R.A.K.E.S and what we’re doing for teenage driving. We would need a sponsor that would tie-in into my land speed record car. So, there are all these things that we really need to consider to be putting a program together. For the last couple of years, it has been a matter of running a couple of NHRA races a year maybe at Bristol because I love going to Bristol or maybe here at zMax Dragway in Charlotte since it’s in my own backyard. We’re just looking hard to try to find the right company, the right partner that we can bring a lot of value to them.”

When the economy took a downturn 2008, it grew  difficult to creating an interesting package for the right sponsor, but Herbert still has the determination and desire to get back into the cockpit.

“You know, I really want to get back out there,” said the 46-year old Herbert. “I love drag racing and have loved it since hanging on the fence when I was a little kid at Orange County and Pomona growing up in Southern California. It was watching Big Daddy, Shirley, Prudhomme, and McEwen. I just love drag racing and I was talking with (John) Force the other week and said something to him like ‘Maybe I’m getting too old for this’ and he laughed saying I didn’t win a championship until I was older than you!

“That made me feel good and I’ve got plenty of time and plenty of value to add to a sponsor. I think what we do and all the experiences that I’ve had in the last 20 some odd years can bring a lot of value, a lot of exposure, a lot of fans, heck, I’ve got more Twitter followers than any of the other drag racers because I’ve had time to focus a little bit on that. I’ve got a lot to offer a sponsor and to the sport of the NHRA. I definitely have some unfinished business.”

Herbert still has his shop and a couple of cars ready and available for the right sponsor. Everything is up to date and ready to hit the track.

“With a sponsor’s funding, we could be ready within a week or two,” smiled the Charlotte resident. “It wouldn’t take us very long to get back out there. You’re not going to show up and beat Schumacher or Kalitta in your first week because they haven’t dominated for a long time without knowing what they’re doing. They have a lot of backing and a lot of smart people, so it’s going to take a little while to get caught up to them. I’ve beat them all before and it doesn’t mean we can’t beat them again.”

Herbert’s life took a dramatic change on January 26, 2008, when he received a phone call during his preseason testing in Phoenix with devastating news. He heard the news no parent would ever want to hear. His two sons, Jon and James, had died as a result of an automobile accident near his home in the Charlotte area.

Since that moment, Herbert swore to make a difference in memory of their lost lives and invented the concept of Be Responsible And Keep Everyone Safe – B.R.A.K.E.S.

“I didn’t know before my kids were in this car accident that between 5,000 to 6,000 kids every year are killed in car crashes,” said Herbert. “Car accidents are the No. 1 killer of teenagers. It’s more than childhood cancer, more than anything by far. Until my own two sons were killed in a car crash, I didn’t know that.

“Once I found out, it affected me directly by taking my two sons. I had to do something, anything I could to try and help save some of these kids. We started B.R.A.K.E.S., which is a nonprofit named by my son’s friends. We could have sought out professional help, but it was the high-school kids that came up with the name.

“Since then, we’ve trained almost 11,000 teenagers from around 15 states. We have schools in California, Arizona, Florida, Georgia, North Carolina, South Carolina, Tennessee, Kentucky, and Pennsylvania to name a few. It’s been incredible to see the transformation in the teenagers from the time they come in for our four-hour class that’s free to them because it’s all for charity. We’re there to reduce teen driving accidents. We teach them to be more responsible behind the wheel, how to make better decisions anticipating what could happen. We help try to give them the information that can help make these decisions when driving. Whether driving or riding with someone in the car, a lot of the accidents happen when in a car. If a person is driving stupid, the students need to know and have the courage to tell them to stop and pull over and go on your way, and say ‘I don’t want to ride with you’. A lot of teenagers aren’t comfortable doing that and think that they won’t be cool, but actually; it’s the smartest thing they could do.”

Once the word got out about this teaching tool for teenagers, numerous schools contacted Herbert. Even his former arch-rival, Clay Millican, and NASCAR’s Kyle Busch joined the project lending their name and funding to the project. “We have instructors that I would want to teach my children,” he said. “They are the same people that teach the Secret Service personnel driving the president on defensive driving, they do TV commercials, and some are racers. Former NASCAR driver, Jerry Nadeau is one of our instructors and we have the highest-caliber people. Teenagers are transformed from not wanting to go to the B.R.A.K.E.S. school to when it’s time to leave, they don’t’ want to leave. Most of them are shocked that they have learned so much and they have gained a lot of respect for the car, and what cars can do.”

“Think about it, to teach your child how to drive and be responsible, you would take them to an empty parking lot and learn from a parent’s direction. We emphasize the number one problem which is distracted driving and keeping their eyes focused on the road and not on their friends or ever texting.”

Herbert has develop a great model to go by and with the input of his friends, now has a program that interests the younger drivers instead of turning them loose on the highway without direction.

Beyond the foundation’, Herbert has many other irons in the fire, one of the most interesting is his trip to the upcoming speed trails at Bonneville.

“The one thing that I’m really working real hard on now is to build this land speed project for Bonneville,” smiled Herbert. “The website is LSRPROJECT.com. I got started on this in 2008 because after my boys’ accident, I wanted to do something on my end. So we decided we were going to build the world’s fastest car to set the land-speed record for unlimited streamliners.

After I started getting things going, my friend, Ray Everham, came over to the shop. He saw this car and after telling him all about it, he insisted he wanted to be involved with it. He has helped a lot with the engineering and technology. He’s a pretty smart guy and one of the top NASCAR crew chiefs ever. Our idea is to get the car completed and ready to compete. We’re hoping to be the first wheel driven car to break 500-miles per hour. So we’re working really hard trying to get that done. That’s a big project. The car is powered by two Dodge V-10 Viper engines, supercharged with about 2,000 horsepower each. It’s a four-wheel drive car. It’s an incredible piece of engineering.”

If that wasn’t enough for Herbert, he discovered a true drag racing artifact that rightfully belonged to his family.

“Here at Herbert Performance Parts we know the hot rodding industry has changed. It’s what I know and what I love. My dad, Chet was one of the original guys of hot rodding and I’m going to keep doing this. Even though the business changes, we have to change with it and keep doing what we need to do.

“I still want to go drag racing and have all the parts and pieces. I’m an NHRA Top Fuel drag racer and I want to get back there and go racing.”

For more info, check out DougHerbertRacing.com.