The NASCAR world was abuzz with the news of five L1 Penalties being levied against Cup and XFINITY teams after the Dover race heading into Kansas Speedway this weekend. Noah Gragson overcame pitting while others stayed out on a last race pit stop to sweep the NASCAR Camping World 37 Kind Days 250. Kevin Harvick won what was probably the season’s most exciting race to date in the Monster Energy NASCAR Cup KC Masterpiece 400 on Saturday.

Gragson Takes Lead from Pole and Almost Never Looks Back 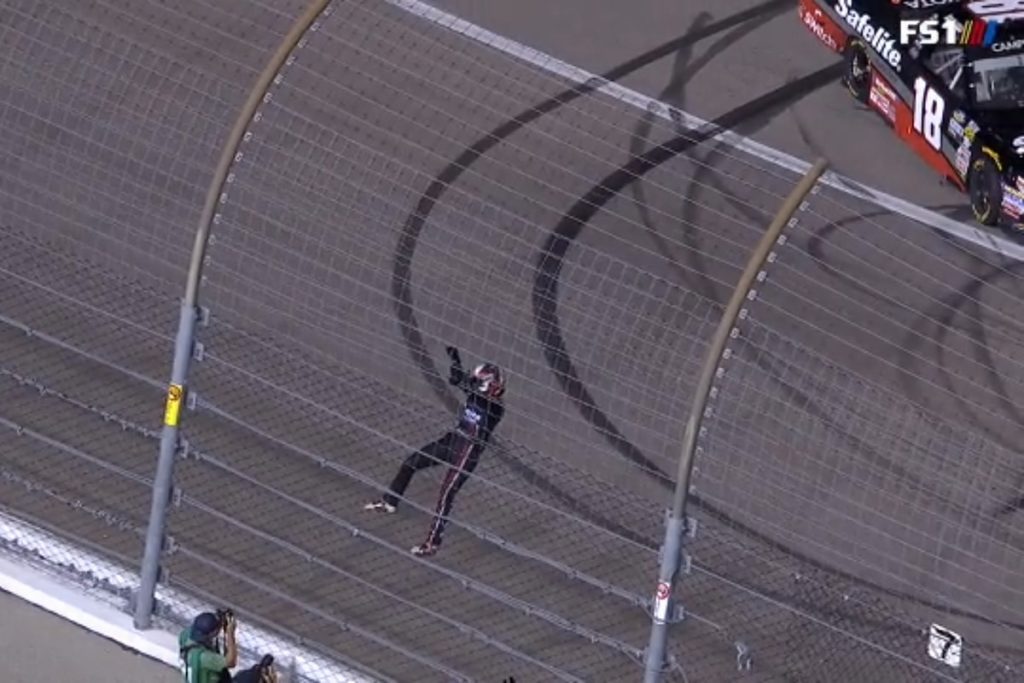 Noah Gragson, in the Kyle Busch Motorsports Number 18, swept all three stages at Kansas Speedway on Saturday. John Hunter Nemechek, in the NEMCO Motorsports Number 8, made it interesting, coming from his starting position deep in the field up to eighth in less than 30 laps. Starting late in the second stage, Gragson battled for the lead with Stewart Friesen in the Halmar Racing Racing Number 52 and Kyle Busch in the Number 4. 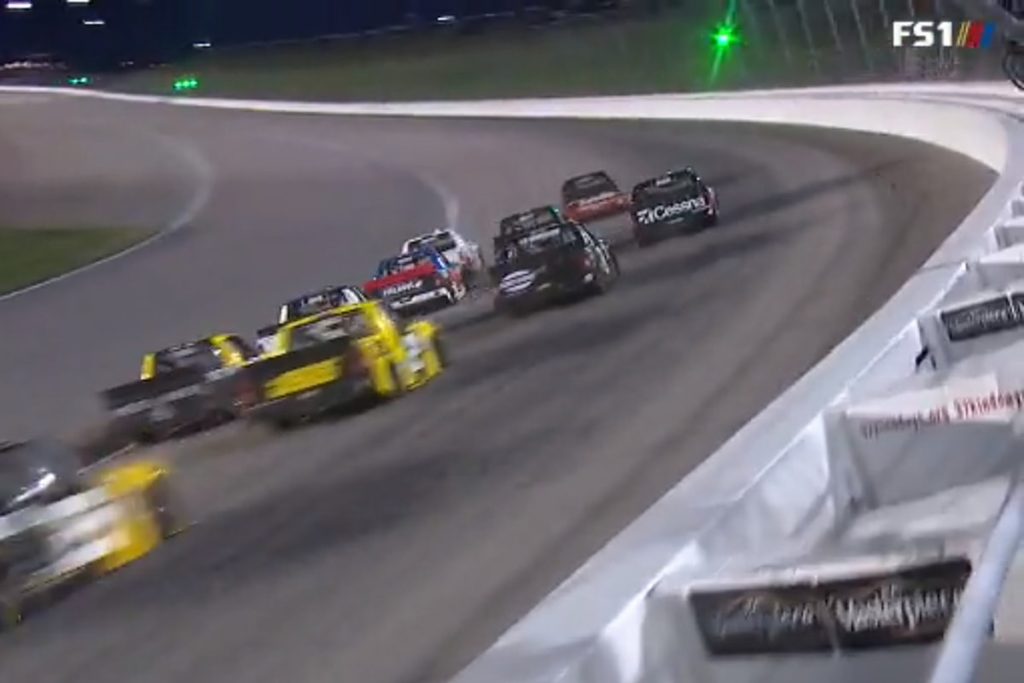 Most of the rest of the race was spent watching Gragson, Busch and Friesen battling for the lead. Gragson and Friesen fought back in the final laps after going a lap down during green flag pit stops and outlasted a group of cars that didn’t pit and won a fuel mileage race.

Harvick Takes Lead Late to Get Fifth Win of the Season 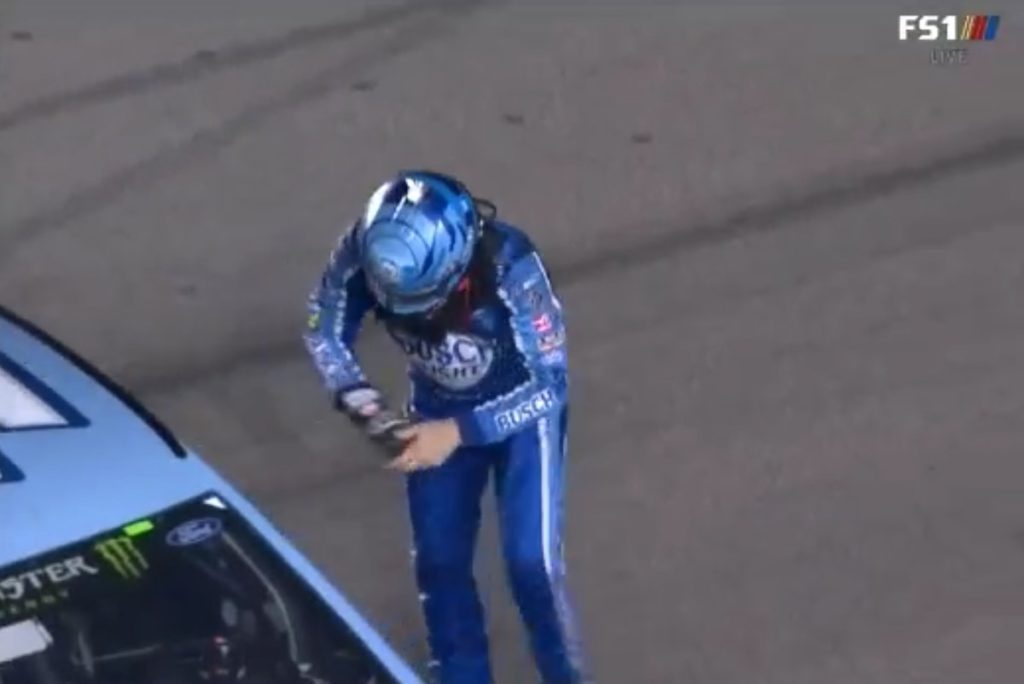 Kevin Harvick took his Stewart-Haas Racing Number 4 to the lead in style late in the Monster Energy NASCAR Cup KC Masterpiece 400 to get his fifth win of the season, and his second in a row, late under the lights Saturday in a race that was red flagged for a seven car wreck (involved were MacMurray, both Dillons, Kenseth, Bowyer, Byron, and Buescher) with seven to go. Harvick squeaked through the wreck by the skin of his teeth. Truex came in third while Logano rounded out the top three.

Kyle Larson, having started in 38th because he changed tires after spinning in qualifying, charged up 29 positions to the ninth position by the time a competition caution was thrown at Lap 31. He charged up to leader Ryan Blaney’s bumper within a few laps, but by Lap 69 Blaney found an extra gear and stretched his lead back out. Blaney ended up winning Stage 1 in his Penske Racing Number 12 and Larson took his Chip Gannassi Racing Number 42 to the Stage 2 win.

The Richard Childress Racing Number 3 of Austin Dillon was found to have violated Section 20.4.3.a&d) with an unapproved splitter that did not meet specifications. Dillon’s Crew Chief Justin Alexander was fined $25,000 and Car Chief Greg Ebert received a one MENCS points race suspension.

The Clint Bowyer Number 14 SHR team was found to have violated Section 20.4.8.1, the section that deals with the rear window support. Teardown revealed that a brace supporting the rear window failed specifications because it “did not keep the rear window glass rigid in all directions at all times.” Daniel Suarez’s Number 19 JGR team violated Section 20.4.8.1.c because the “rear window decklid was not sealed properly.” Both Crew Chiefs-Mike Bugarewicz (14) and Scott Graves (19) were fined $50,000 apiece and both Car Chiefs-Jerry Cook and Todd Brewer, respectively, have been suspended for two points races. Owner and driver points (20 each) were also docked from both teams.

The 3 team was found to have violated Section 20.4.3.a&c with a splitter that didn’t meet specs. The 7 team violated Section 20.14.2.h, the section that covers rear suspension and trailing arm angles/pinion angle shims. It was found at teardown that the truck trailing arm spacer/pinion angle shim surfaces were not in contact at all points, at all times, which can create additional side force during the race.

The L1 penalty also comes with the result that Allgaier can’t count on the win for its playoff benefits and will have to win again for a Chase berth. He also loses the five playoff points. He does, however, get to keep the Dash 4 Cash $100,000 bonus.

On a side note, Kurt Busch’s Number 41 MENCS car was found to have an improperly tightened lug nut after the race. His Crew Chief, Billy Scott, was fined $10,000.