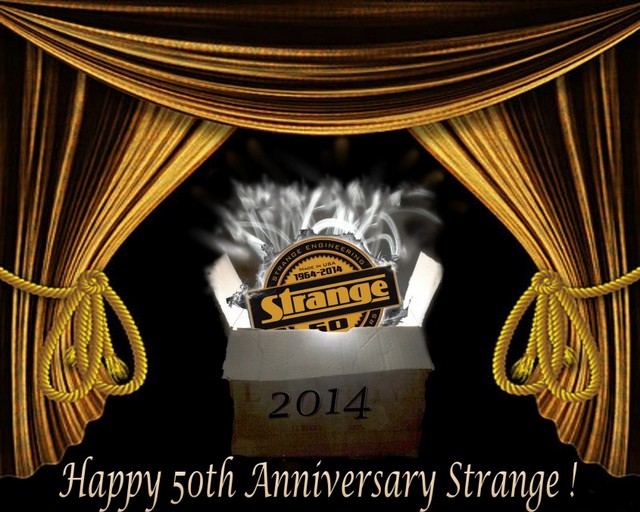 Congratulations to Strange Engineering on their 50th anniversary!

What started as a small operation, with Bob Stange making suspension parts for friends in his mom’s garage, has grown into an industry leading manufacturing company housed in a 120,000 square foot site.

Bob Stange made his mark in the performance industry when he helped Chicago racer Chris “The Greek” Karamesines build a rear-end that would withstand the abuse of his Don Maynard tuned Top Fuel car.

“I called Bob one night after I broke another rear-end and needed one right away to make a match race,” recalls Karamesines. “He came over to my shop and worked all night to build me a new rear-end. I never broke that rear-end and I still have it. I’ve never used anything else but Strange components since.”

Other Chicago racers that depended on Bob Stange include Austin Coil and the Chi-town Hustler group. Bob Stange has always given back to the sport of drag racing by sponsoring many drag racers over the years.

50 years later, the family owned business is still based on principles the company was founded on: “quality product, quality service and a true enthusiasm for the performance industry.”

Keep an eye on Strange Engineering’s official website, www.racestrange.com, for your chance to get in on special promotions as they celebrate 50 years of “fueling the passion for the sport of drag racing!”

February’s promotion is a 50/50 Axle Spool Package Sale where you will receive $50 off the axle spool package and up to $50 off shipping charges.