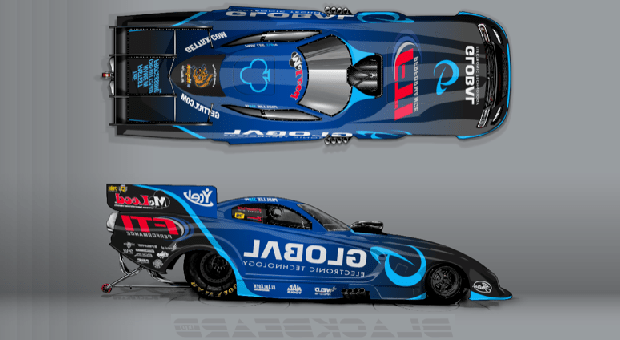 Global Electronic Technology has decided to join Paul Lee Racing for the 2020 season of the NHRA Mello Yello Drag Racing Series. The company’s vivid blue will adorn Lee’s nitro funny car as the major marketing partner for 12 races of the 15 Lee plant to run this year.

Survivor of a heart attack in late 2016, Lee is on the campaign trail to return to the seat of a nitro funny car. In 2019, the car competed in eight races with the Jim Oberhofer-led team. This time around, Lee plans to expand his program, compete at the highest level of NHRA and continue as a part of Straightline Strategy Group.

“I’m extremely excited for the 2020 NHRA season. If you’re racing at this level and as competitive as Jim O, the team and I are, the goal is to grow with the personnel and resources that it takes to put us in a position to compete for race wins and, hopefully, championships. That has always been my goal in racing,” said Lee, of Orange, Calif. “When I returned to this sport after my heart recovery, I made it a point to build a competitive team, race hard and – most importantly – have fun racing with my friends and family.”

“I have had the pleasure of getting to know Paul Lee and Jim O over the course of the last few years,” said Steve Bryson, owner of Global Electronic Technology. “The relationship rapidly ascended from friends to family. Paul Lee and his companies were one of the first to stand up for Global Electronic Technology, allowing us the opportunity to show them what we can do. It’s an honor to be an associated sponsor on Paul’s Funny Car. Anyone with the will to come back to life and get behind the wheel of a funny car is a champion and we’re excited to go racing with him.”

Coming off a successful 2019, Jim Oberhofer has the crew and resources to make 2020 a great season – all that remains to be seen is if he has the luck. Oberhofer has been a vital part of this team since its creation and carries the same beliefs of Lee and the Brysons for 2020.

“Last season was a learning year for us and we accomplished a lot in a short amount of time,” said crew chief Jim Oberhofer. “I’m very proud of the team, of Paul and his great driving ability and the performance of the car. 2020 is looking to be great with Global Electronic Technology as a sponsor, which will give us the ability to compete to win. I’m fortunate for the relationship with the Brysons and Pat Galvin over the years, and now I have a business relationship with the Brysons as we use the processors at the Victory Lane Plano, TX store. A quick and fast car to match with the quick and fast processors.”

“All of our partners are part of the reason we have been so successful,” said Lee, who ran a career best of 3.88 at 332 mph last year. “We are still a small team, but we have the opportunity to compete with the best of the class with the support of our partners.”

The team plans on testing in Las Vegas for the PRO pre-season session and will begin the 2020 season at the WinterNationals in Pomona, Calif.