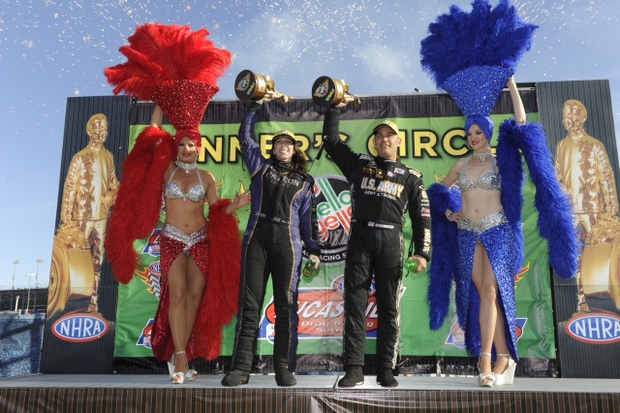 It was a ‘Girl’s Rule’ weekend on the Strip at the Las Vegas Motor Speedway for the 15th annual running of the Summitracing.com NHRA Nationals. 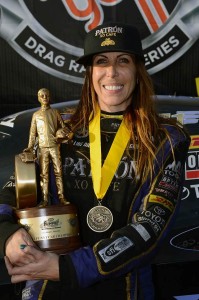 Alexis DeJoria is enjoying her new role as a Funny Car race winner so much; she decided it was time for an encore performance, this time cashing in at Las Vegas.

Throughout qualifying, the Patrón XO Cafe Toyota Camry made clean and consistent passes, but opted to be conservative, placing them in the No. 12 spot in the competitive 16-car Funny Car field running a solid qualifying lap of 4.090 seconds, 309.84 mph.

DeJoria and Hight had met previously in the Finals in Phoenix, the second race of the season, with the lady from Austin, Texas coming out on top. She is 4-0 against Hight in competition and the only woman Funny Car racer to break into the 3-second barrier.

“It was definitely a great day at the office to get the win for the Patrón team here in Vegas where they are headquartered. It was huge.” DeJoria said, while clutching her Wally. “We have been in a few semi-finals but never made it past that point here at this track.

“Today we focused on taking it one round at a time, and with each round win, I was just hoping and hoping. And then when we just kept going rounds, I kept my head down and tried to stay focused. Tommy (DeLago, crew chief) and my crew gave me a great car today and it felt amazing for our team to pick up our second win of our career.”

DeJoria is solidly in third place in the NHRA Mello Yello points standings with 299 points trailing leader, Hight by 68 points with John Force in second place after the completion of four NHRA National events. 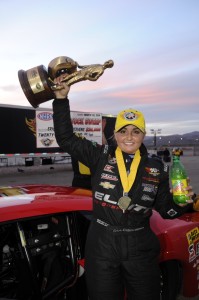 Enders-Stevens had the best racing weekend of her career in Las Vegas, doubling up in taking wins in the K&N Horsepower Challenge on Saturday and Sunday’s Pro Stock Summitracing.com Nationals title.

She and all the Pro Stock combatants had to wait nearly four hours to compete due to the unusually high desert wind gusts that could have proven to be a detriment to the sleek Detroit designed cars. Once the winds settled down later in the afternoon, NHRA gave the green light to the competitors and Enders-Stevens was on her way into the record books.

After defeating Dave Connolly to win $50,000 on Saturday, in the special race within a race, on Sunday, she took out Larry Morgan, Steve Kent, Chris McGaha and Jason Line to secure her seventh career victory at the controls of her Elite Motorsports Chevy Camaro.

“I have a different mindset,” Enders-Stevens of her new attitude this year. “It goes back to the people (I’m around) – for the first time since I raced with my family as a kid, and then in the sportsman ranks, I’m having fun again. As a driver, it adds a lot of pressure when you have the fastest car, but I like that.”

She owns the Pro Stock National Speed record of 214.69 mph and with that win, Enders-Stevens becomes the third winningest female driver in a professional class only behind Angelle Sampey and Shirley Muldowney.

With taking her seventh win and making her second final found appearance of 2014 sees Erica Enders-Stevens now as the NHRA Mello Yello Pro Stock points leader, a first in the history of the class.

“Winning the K&N Filters Horsepower Challenge certainly is very important to us, it keeps us going on this 24-race schedule,” said Enders-Stevens, who earned $100,000 during the weekend which also includes a $25,000 Sweep Bonus from NHRA. “This is storybook. We’ve gone a few years without sponsorship; there were definitely more lows than highs. It would have been easy to quit. This is definitely a highlight. Next to winning a championship, this is probably the coolest thing in the world.”

Her final round opponent, Jason Line was going for his second victory of the 2014 campaign and second at Las Vegas. The driver of the Summit Racing Equipment Chevy Camaro defeated Deric Kramer, Dave Connolly and teammate Jimmy Alund en route to the final against Enders-Stevens.

She now leads second place, Jason Line by 15 point s in the NHRA Pro Stock points race, and ahead of third place, Allen Johnson by 27.

It was the second time that two female drivers have earned victories at the same NHRA event. In 2012, Courtney Force and Enders-Stevens made history as the first pair of females to win the same race at Pacific Raceways near Seattle. 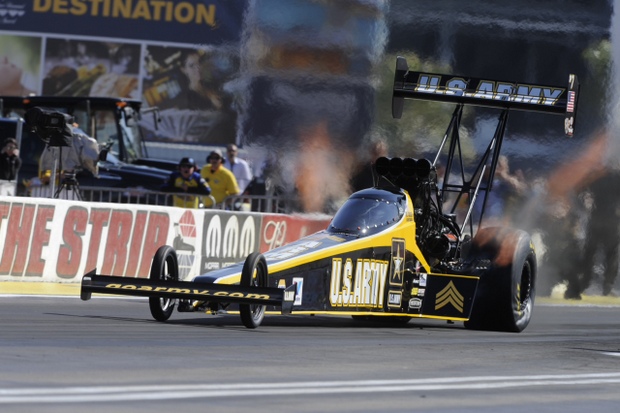 In Top Fuel, Tony Schumacher defeated points leader, Doug Kalitta in the finals with his performance of 3.797 seconds at 326.16 mph ending his 15-race winless drought. It was Schumacher’s 73rd career victory and his eighth on the Strip at Las Vegas Motor Speedway.

“The final round was fantastic, I could hear him the whole way,” said Schumacher. “It was important for us to get this win. There’s a lot of pressure early in the season to get a win and get into the Traxxas Shootout for a chance to race for $100,000. I love the pressure. We’re a high-pressure, adversity kind of team.”

Schumacher advanced to the final with early round wins over Troy Buff, Spencer Massey and Antron Brown.
“I’m not angry that we hadn’t won in a long time,” Schumacher said, whose crew chief, Mike Green earned his 38th victory as a tuner. “I was disappointed, but I understand that you have to make leaps and bounds. Kalitta is running great; Antron (Brown) is running good, the Alan Johnson (Al-Anabi) cars are going to be bad to the bone pretty soon. We have to keep forcing the issue.”

Kalitta has had the best start to the season in Top Fuel and continued that by reaching his third final of the year in four races. With the win in Gainesville and the two runner-up finishes at Pomona and Las Vegas, Kalitta increases his points lead over Antron Brown to 73 points.