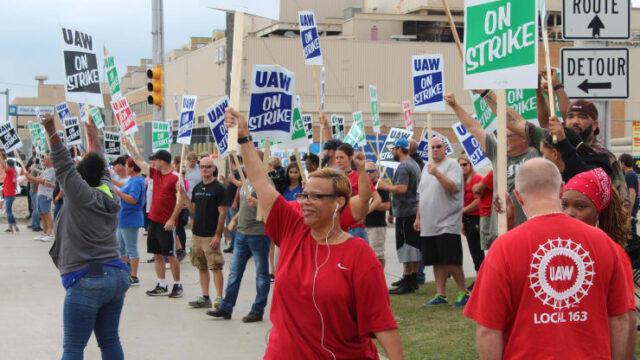 United Auto Workers woke up to a victory this morning after hearing that GM has reinstated health care benefits for its 48,000 members. Now in it’s 11th day, it looks like UAW is inching closer to a deal. The UAW were forced to sign up with temporary COBRA plans after GM cut health-care coverage for union members last week.

GM stated that the change caused “significant confusion” among Union Members according to a letter from the UAW.

“GM is very concerned about the significant confusion caused around our employee’s health care coverage. Throughout this negotiation,” Scott Sandefur, GM – North America vice president of labor relations, wrote in the letter to UAW Vice President Terry Dittes. “GM has said that our number one focus was on the well-being of our employees. That remains the case today.”

Dittes, in response, called GM’s changes in health-care coverage “irresponsible,” saying the automaker is “toying with the lives of hundreds of thousands of our UAW families.”

“Finally, it is time for GM to come to the bargaining table with an offer that reflects the hard work of our members who make you successful and will settle this strike on behalf of the hundreds of thousands of UAW families, and stop toying with our families’ health and well-being.”

Both sides reported Thursday that they were returning to the bargaining table.