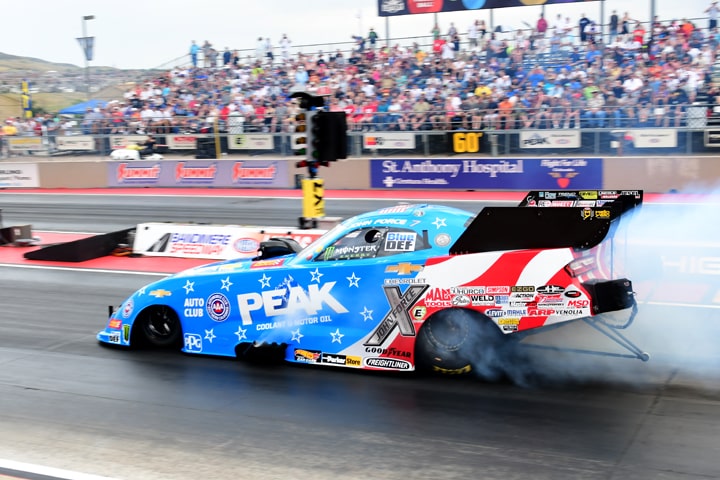 Last year’s rendition of the Dodge Mile-High Nationals on the Bandimere Speedway dragstrip just west of Denver, Colorado was monumental for several reasons, particularly in the Funny Car class. It marked the initial outing of Dodge’s new Charger SRT Hellcat, driven only by Matt Hagan in debut, even as Dodge showcased its street version of the same machine at its namesake race.

Bandimere 2018 was the site of John Force’s most recent and 149th Funny Car victory, driving the PEAK Chevrolet Camaro SS racecar. While the balance of his 2018 and start to his 2019 season hasn’t been as volatile as Force’s 2018 start, where he crashed three times – heavily – in three races, he still hasn’t been able to connect with that win light to get No. 150.

The 16-time Funny Car champ isn’t letting it get to him – at least not with verbiage – and his driving has been good, especially since he gained the crew chief team of Brian Corradi and Daniel Hood. They’ve managed to get the car to his liking and he’s rewarded them well, currently running second in points to son-in-law Robert Hight, with a lag of only 176 surmountable points. The John Force Racing duo have been formidable, leading up to this race. 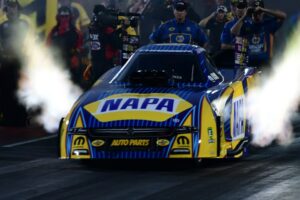 This weekend marks the 40th annual NHRA visit to Bandimere Speedway, and the Funny Car contingent have given fans plenty of reasons to return. Because the start of NHRA’s tough Western Swing begins at this near-5,900-foot-above-sea-level dragstrip, every competitor is facing a severe loss of power and needs tuning expertise to overcome.

Not the least of those is weather, as mid-90s temps are forecast for all three days of qualifying and eliminations. The elevation and weather, together, can cause many crew chiefs challenges in effecting a proper tune, and it’s always interesting to see who gets it right. Thankfully, NHRA schedules both Friday and Saturday qualifying sessions later in the day to aid both competitors and fans wanting to enjoy the competition. It might be a few degrees cooler when Sunday eliminations run.

Matt Hagan, in particular, is hoping his one-year anniversary on debut of the Dodge Charger SRT Hellcat in Denver is far better than the first time, when he was gone after the first round of eliminations. Bandimere is one of the few tracks where the two-time NHRA Funny Car champion has failed to score a victory and, coming off his third straight win at Epping two weeks ago, the Virginia cattle farmer is hoping momentum holds up. “Going to Denver,” he said, “can humble you, so you have to have a pretty good gameplay.”

Shawn Langdon, already a winner this season, wouldn’t disagree with his competitor. The Kalitta Motorsports racer directed his Toyota Camry to the New England NHRA Nationals final at Epping and has his own reasons to think momentum is on his side. “Starting the Western Swing in Denver is always exciting and a challenge. We have a completely different tune-up for Bandimere – every team does. I think it puts more in the driver’s hands. You have to be great on the tree and also be ready for anything,” Langdon said. 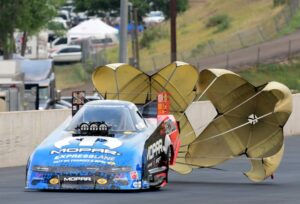 Tim Wilkerson, who beat Jack Beckman in 2008 to earn a sole Denver victory in his only final round appearance at the track, will be back in his 2019 Ford Mustang after damaging the body in Joliet during slight wall contact. It will be his second straight race with the repaired Mustang body; Wilkerson secured a semifinal result at Epping. “I like Denver,” he said. “I’m following Bob Tasca’s lead on where to put the spoilers and all that, and that’s really been helping me,” as he adjusts to the new car’s needs.

In the points tally, and with the six-race Countdown to the Championship playoffs set to begin at Reading after the 18-race “regular” season ends during the Chevrolet Performance U.S. Nationals at Indianapolis, John Force Racing’s Hight and J. Force are the leaders. Tommy Johnson Jr. is third (-188 points), followed by DSR teammates Ron Capps (-209) and Jack Beckman (-228), with J.R. Todd in sixth, followed by Bob Tasca III, Matt Hagan, Tim Wilkerson and Shawn Langdon, who is 404 points behind Hight.