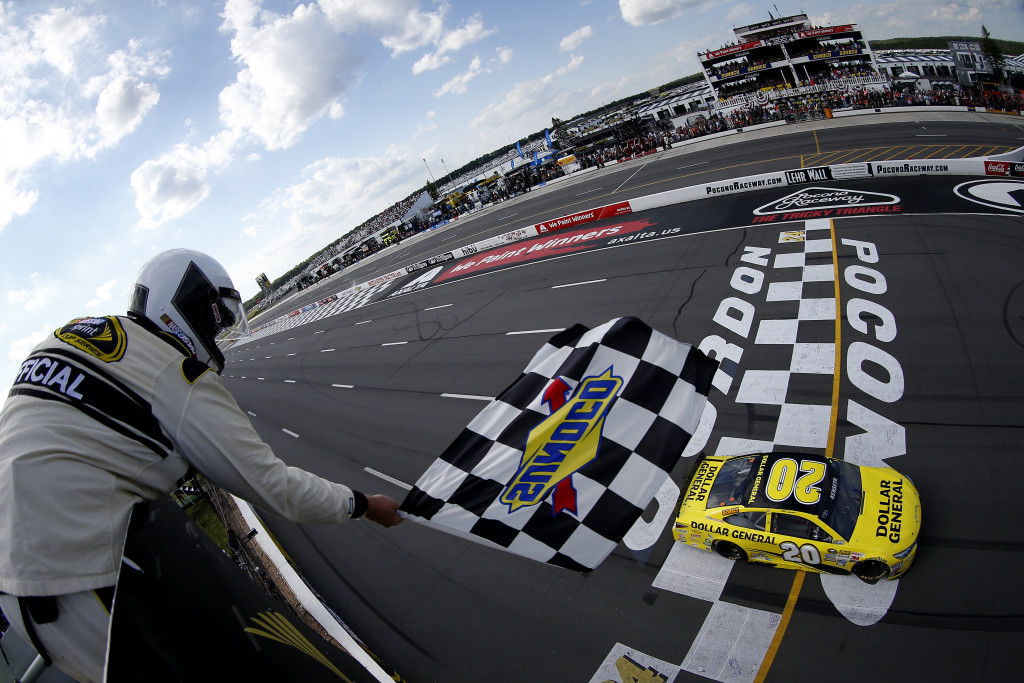 All photos courtesy of NASCAR.

Kyle Busch’s shot at winning four NASCAR Sprint Cup events in a row ran out of gas, literally, this weekend when his Joe Gibbs Racing Toyota lost power on the Long Pond straightaway after taking the white flag as the leader.

Three laps earlier, then leader Joey Logano had the same thing happen to him along with third place runner Martin Truex, Jr., leaving spectators looking at the scoreboard to see who was left running.

16 seconds behind was Matt Kenseth sailing straight to the lead for the last half lap to give him the win at the Windows 10 400 win at Pocono Raceway.

“There’s nothing like wins,” said Kenseth, who collected his first victory at Pocono and the 33rd of his career.  “We had a lot of wins in 2013 and were pretty spoiled and last year we had a big dry spell, and this year we were able to win Bristol.

“We’ve been up front a lot, so just really, really thankful to be with these guys and to get the win.  I never thought I’d ever win at Pocono, and I never ever thought I’d win a fuel mileage race, so we did both today.” 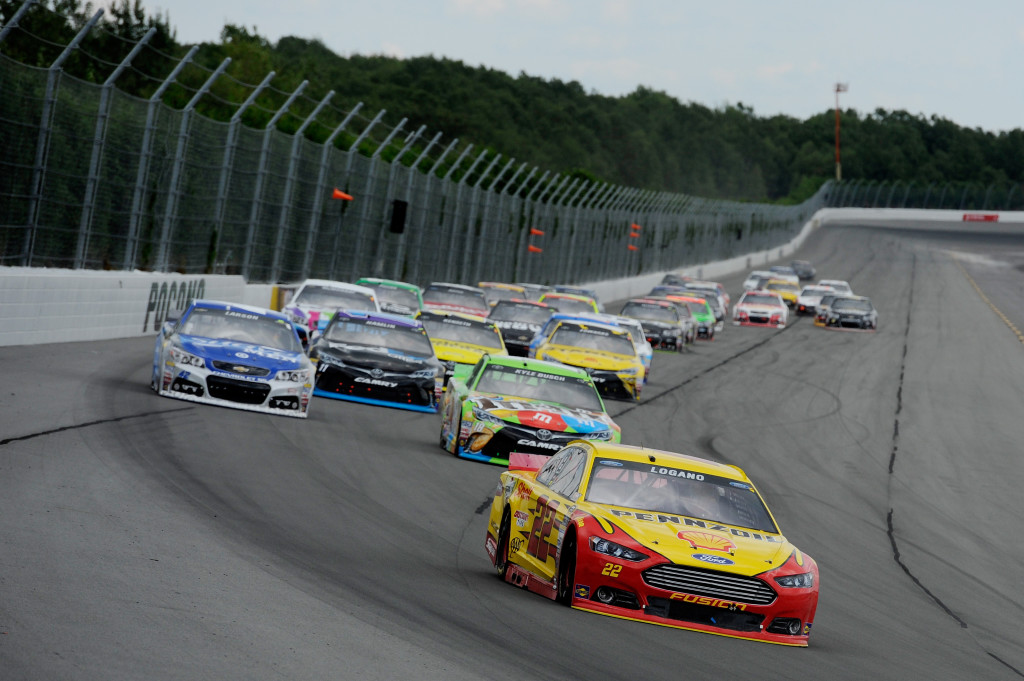 Logano, Busch, Truex, with Kenseth all hit pit road together with 38 laps to go in hopes of stretching the distance.  The strongest car belonged to Logano pacing the field for 97 laps.

Busch had the most at stake as he strove for his fourth win in a row, which would have moved him into the 29th position in the driver standings, but after ending up 21st, the first car one lap down in the final order now puts him 32nd, 13 points out with David Gilliland and Cole Whitt slightly ahead with five races to go.

“Man, that’s a bummer,” said a disappointed Busch, who ran out of fuel so close to the finish.  “I wish I would’ve saved a little more there on that last run knowing that the 22 (Logano) was that far away from making it.  We would be celebrating a win and a Chase berth.  We got greedy.  I don’t know how greedy, but that’s the position we’re in.  But, we went for broke today and come up a little bit short, so I can’t fault the team.”

Brad Keselowski benefited the best from the cars dropping out of contention,  finishing in the runner-up position, 9.102 seconds behind Kenseth on fumes and at the flag, Jeff Gordon suddenly appeared in third position.

“Unfortunately, just another race where I kind of feel like it didn’t all come together for us, and this one certainly on my end with having problems on pit road and kind of sliding through the box,” said Keselowski, who was penalized with a drive through penalty for his pit mishap.  “That dug a hole, got us a lap down with the penalty and so forth.” 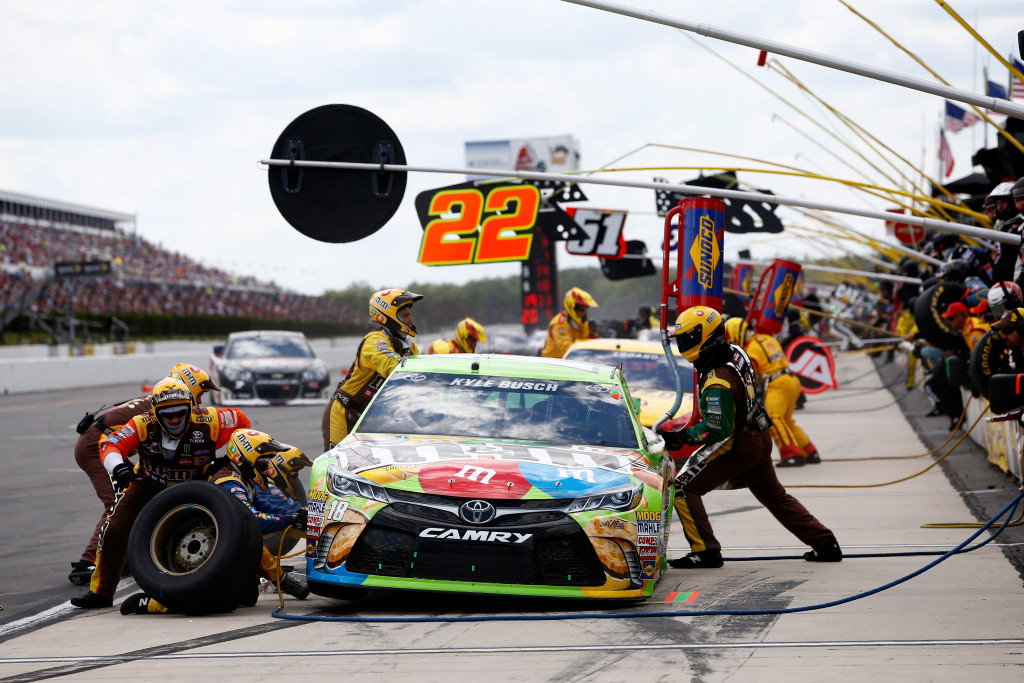 Gordon stayed in the push mode pitting later sacrificing early track position just to get to the finish which surprisingly earned him third in his final Pocono race.

“There at the end we were one of the last ones to pit which allowed us to run hard all the way to the finish not having to conserve or save fuel,” said Gordon.  “I thought we were trying to get maybe 10th or 12th and all of a sudden they said you’re third, and I think I was probably the most shocked person out there on the race track when I found that out.”

Kenseth won with an average speed of 132.159 with eight caution flags flying for 32 laps.  The Tricky Triangle produced 18 lead changes among 13 drivers with three of those in just the last two laps.

The next stop on the NASCAR Sprint Cup tour is the Cheez-It 355K road course race at Watkins Glen International on Sunday, August 9 at 1:30 p.m. EDT on NBCSN. 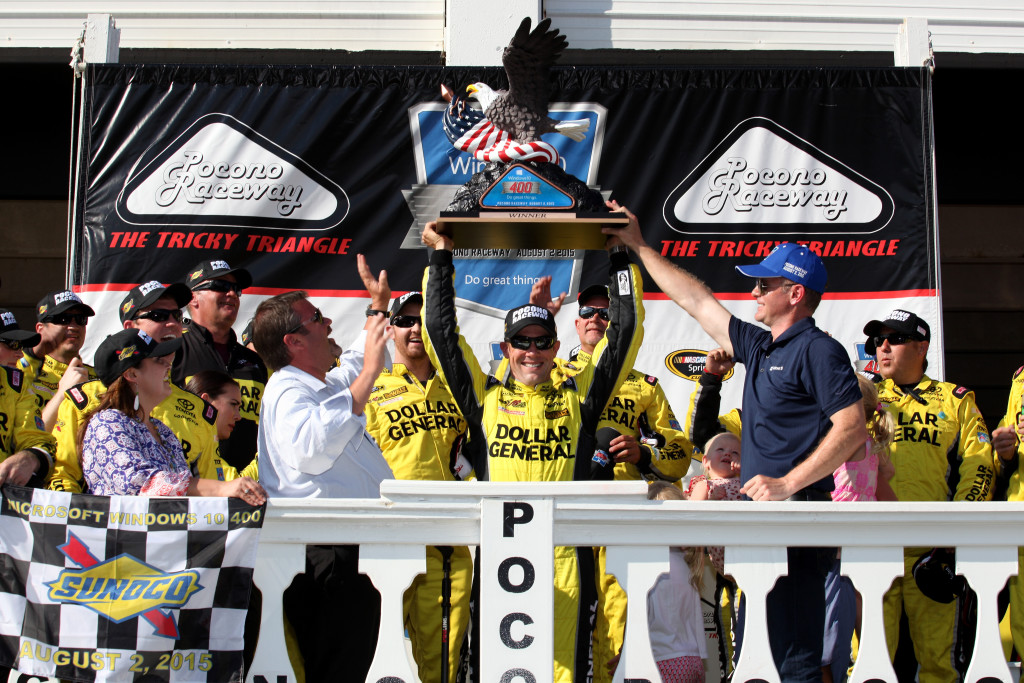