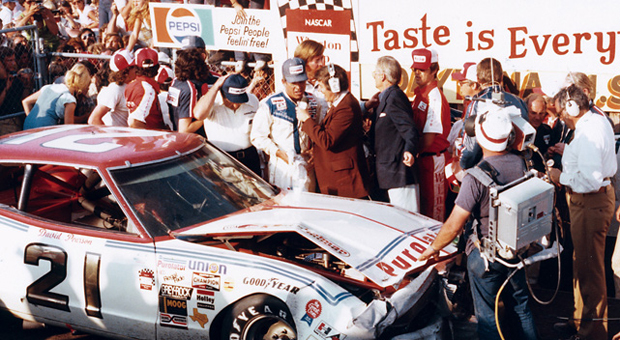 This weekend’s 57th annual NASCAR Daytona 500 is gearing up to be one of the all-time great races.  Jeff Gordon is on the pole for  his last full Sprint Cup season along with Hendrick Motorsports’ teammate Jimmie Johnson on the front row.  All indications are for another first time winner amongst some of the tightest competition seen in many years. So far, no one car is dominating.

Looking back at past events shows us that the outcome of the 500 is always hard to predict, however. The fastest car doesn’t always win the race; it’s often the decisions of insightful crew chiefs and savvy drivers that changed the course of racing history, creating some of the 500’s best moments.

We’ve been thinking about great races a lot here, now that race season is once again underway, and the Burnout is pleased to bring to you four of our favorite Daytona 500 finishes (it was supposed to be three, but we just couldn’t decide). 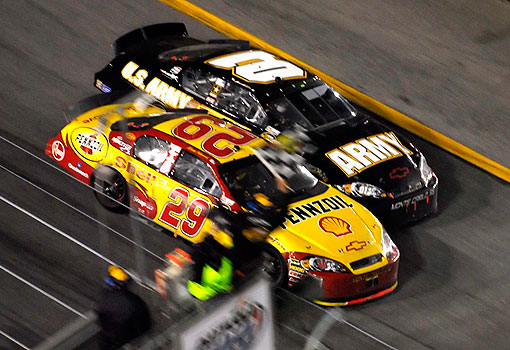 In 2007, relative newcomer Kevin Harvick caught Mark Martin in the final few feet to take his first 500 victory in the closest finish in the history of the race.

With two laps to go under the green-white-checkered rule, Harvick was getting bumped drafted by Matt Kenseth and Jeff Burton lining up on the outside to make a charge to the front.  Leader Mark Martin was hoping the skirmishes and jockeying for position alongside and behind him would slow the field long enough to give him more time to stretch his lead.

Kyle Busch was taking up all the space in Martin’s rearview, running side to side and trying to get by with no room to spare.  As the trio of Harvick, Kenseth, and Burton came barreling out of turn four on the white flag lap, Busch did his best to block but ended up hitting the apron, causing a melee of cars crashing within reach of  the finish line.  Clint Boyer took the brunt of it, flipping over  and skidding across the line on fire.

Amazingly, Harvick stayed ahead of the disaster and slowly caught Martin on the outside lane, just nipping him at the line to collect his first 500 victory. He won by .02 seconds, and sealed his name in NASCAR lore. 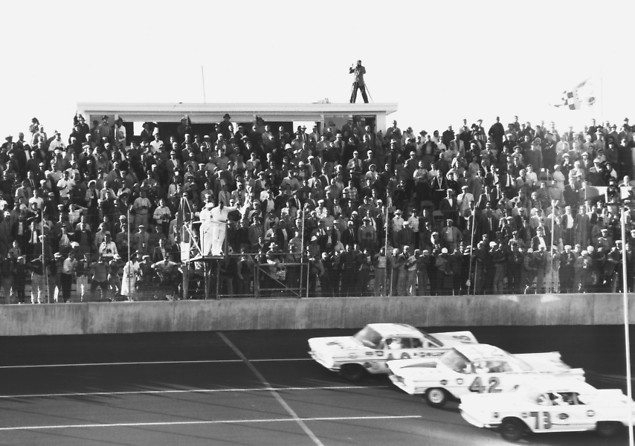 The ending of the inaugural 500 in 1959 was hotly contested as No. 42, Lee Petty, protested the finish over first-tagged winner, Johnny Beauchamp. Petty knew he was two feet ahead, but it took until Wednesday before Daytona track president, Big Bill France declared Petty “champion” in the race’s first photo finish.

1976 – Bicentennial Blues with Pearson and Petty

How could anyone forget 1976? America’s bi-centennial year kicked off with fireworks in February as the David Pearson/Richard Petty rivalry reached a point of no return.

On the white flag lap, Pearson buzzed by Petty on the backstretch. ‘The King’ had been protecting the inside but Pearson passed a lap car and snuck by.  Spurred by this slight, the Randleman rocket attempted to dive underneath Pearson.  Coming off turn four, Petty slipped in front, but there just wasn’t enough space and his Petty Enterprises STP Dodge Charger began to sway.  Pearson’s Wood Brothers Mercury lost control, spinning to the right, hitting the wall while Petty struggled to regain momentum and control  before nosing in on the wall.  Pearson slid down towards pit road and ran up on Joe Frasson, who was trying his best to get out of the way even as Pearson ricocheted off his car. 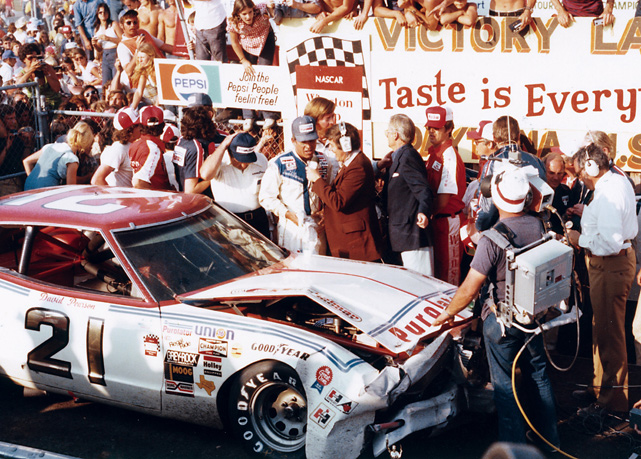 The Silver Fox kept his head and his left foot engaged on the clutch throughout the spin,  finally pointing the Mercury at the finish, and took the checkers at around 25 mph.

At the same time Petty spun towards the finish but stalled short by 300 feet.  Petty’s crew ran out to push in spite of NASCAR’s no assistance on the white flag lap rule, and edged Petty across the line.  Petty was penalized a lap for his crew’s help, but still finished second, one lap down with Benny Parsons coming in third.

1979 – Technology Crashes and Burns as the Greats Race 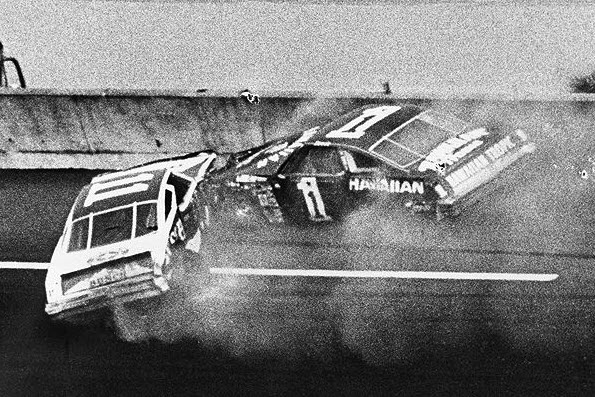 The greatest 500 finish has to by the 1979 Daytona 500. It was NASCAR’s first flag to flag coverage on CBS and that Sunday, February 18th, it was in jeopardy of not running. Heavy rain came in overnight and didn’t stop until nearly noon.  In the press box, the buzz was all about the blizzard in the southeast lifting the TV ban of the surrounding states.  The risk of the 500 getting rained out with so much on the line had Big Bill France announcing that the TV money would be given to the drivers if they raced.

Most drivers weren’t quite prepared to jump into the cockpit, but as promised to CBS the 500 took the green flag at 1:00 p.m. with a yellow/green situation. Officials were counting the laps while still drying the track.

As the race went full green, pole winner Buddy Baker lost power allowing outside pole winner Donnie Allison to take over the lead.  Baker fouled a spark plug under the humid conditions on the caution and couldn’t got his engine to perform.

Cale Yarborough’s Oldsmobile quickly got to the front, challenging Donnie and foreshadowing what was to come.

As early as lap 32,  Donnie Allison,  his brother, Bobby, and Cale Yarborough had all slid off into the backstretch via some very wet grass and mud.  It was so deep that Cale and Donnie each lost three laps in a desperate attempt to get out of the mire, and the wreckers were getting stuck in an attempt to pull cars out.  CBS’ Ken Squier and David Hobbs vowed it was over for the drivers, but both Allison and Yarborough came roaring back to make up all three laps, heading back to the lead by lap 200.

It didn’t take long for the duo to build a 20-second lead in front of Richard Petty, Darrell Waltrip and A.J. Foyt.

As the network saw the buildup of a spectacular finish, they kept the cameras on Allison in the lead with Yarborough right behind him.  After taking the white flag, Yarborough waited to slingshot down the backstretch and make his run coming off turn two.  Allison checked his rear view and gave Yarborough the outside lane, but he was determined to go inside.  Allison pulled the block sending Yarborough’s left tires into the mud. Both cars slammed together, spinning out going into turn three before sliding to the inside between turns three and four.

CBS suddenly found themselves in a predicament: there was no sigh of third place, and 15 seconds went past with cameras searching before finally finding new leader, Richard Petty, with Darrell Waltrip in hot pursuit and Foyt in tow.

At the time, spotters weren’t available and Petty, Waltrip and Foyt suddenly rolled up on the accident scene noticing that the No. 1 and 11 cars were on the apron.  Petty held Waltrip in check despite DW’s persistence and went on to take the checkered flag and his sixth Daytona 500 championship.

Of course, this race is equally famous for the post-finish fight between Donnie Allison and Cale Yarborough. Bobby Allison stopped to check on his brother, and it was at that moment that Cale swung his helmet at Bobby. When Bobby saw a little blood coming out of his nose, the fracas was on in front of a national TV audience and changed the face of NASCAR forever.

Petty would go on that year to win the Winston Cup championship by 11 points over Darrell Waltrip, his seventh and last.

TV coverage for the 2015 Daytona 500 this weekend starts on Thursday at 7:00 p.m. EST on FOX Sports 1 with the Budweiser Duels to set the field, followed by the Daytona 500 at 1:00 p.m. on Sunday, February 22 on the FOX Network.
About Jay Wells 321 Articles
Jay Wells, 61, is a veteran motorsports public relations and marketing official. He spent 33 years at the track working with NASCAR, IndyCar, IMSA, and NHRA series' before retiring in 2009. He began writing for RacingJunk.com in September of 2013 covering the NHRA and NASCAR circuits with post race coverage along with feature and breaking news stories. Wells resides in Mooresville, North Carolina. Follow Wells on Twitter @ jaywells500.