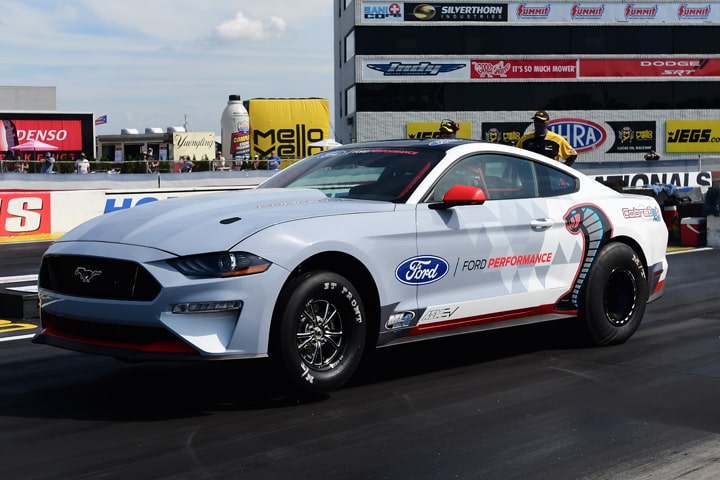 More than a year and a half after Chevrolet presented its electric COPO Camaro racer, Ford’s prototype made its first appearance the day before professional qualifying opened for the NHRA’s DENSO Spar Plugs U.S. Nationals at Lucas Oil Raceway outside Indianapolis.

Ford’s Mustang Cobra Jet 1400 prototype had already performed between 30-40 test runs prior to this event, under the experienced hands and feet of Patrick McCue, the school shop teacher who has challenged his students to build an electric car themselves. He was the driver of Chevy’s electric race car last year. 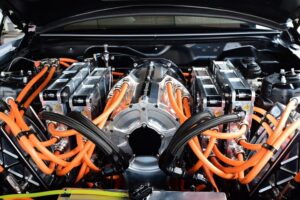 Ford Performance collaborated with Cascadia Motion, who provided four PN-250-DZR inverters, coupled to a couple of DS-250-motors, which gave the Cobra Jet four total motors spinning at up to 10,000rpm. These motor-inverter packages ruin at 800 volts and up to 700 amps, with maximum output of 350kW per motor. 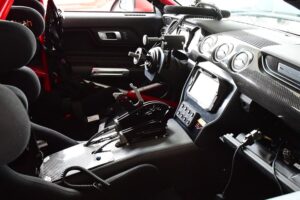 The intent this weekend is to pit Ford’s primary Funny Car racer, Bob Tasca III against Tony Pedregon, who currently handles a microphone instead of a steering wheel. The latter will drive one of Ford’s internal combustion engine Mustang Cobra Jets. Ford chose the U.S. Nationals to publicly premier the Mustang Cobra Jet 1400 because of its status as the biggest gathering of drag racing competitors and fans in the country.

“It’s been a great but challenging project for all of us at Ford Performance,” said Mark Rushbrook, global director of Ford Performance Motorsports. “The opportunities to learn with the Mustang Cobra Jet 1400, as well as the Mustang Mach-E 1400 we recently introduced (with drift champ Vaughn Gittin), gives us great insight into what may be possible to high-performance all-electric vehicles for Ford going forward. We are very interested in continuing to work with NHRA to determine how electrification can be part of the sport and to show off the Cobra Jet 1400 at max power – in due course as regulations develop.”

Tasca made a preliminary run at mid-afternoon Thursday and intended to make another before day’s end, to gain comfort in the car.