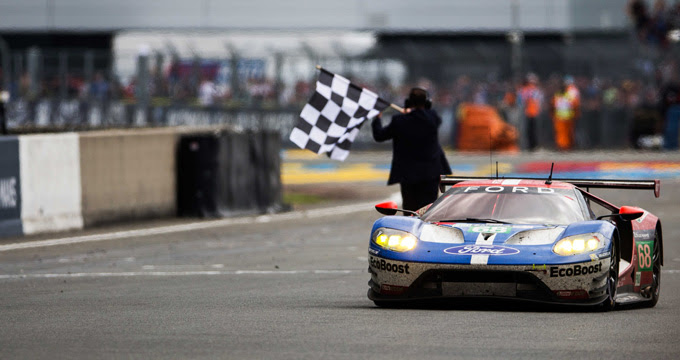 Ford had a case of Deja Vu this past weekend at LeMans. The No. 68 Ford GT took home the gold in the GTE pro class, beating their old time Italian nemesis Ferrari. Dirk Muller, Joey Hand, and Sebastien Bourdais were the men that drove the GT 24 hours through the checkered flag.

“This is a historic moment for the Ford Motor Company,” Bill Ford, executive chairman of Ford, said in a statement. “We dared to dream that we could return to Le Mans, 50 years after the incredible 1966 win and take on the toughest competition in the world. The pride we all felt when the Ford GT crossed the line at Le Mans is indescribable.”

Hand was in the driver’s seat when the GT took first place in the 20th hour and never gave it up.“We put it all on the line as drivers today…and the car just kept on trucking,” Hand said after the race.

The victory is especially sweet for Bourdais, a Frenchman who has competed in Le Mans 10 times without a win — until Sunday.

“There was so much effort, so much emotion, and to be the one that wins the trophy to give to the Ford family and everyone involved is very special,” Bourdais said. “Everything aligned for us today — the history, the Ferrari/Ford battle, 50 years on and the Ford family being here. To come out on top of all that is an amazing feeling.”

Ford has won the event in 1967,1968, and 1969 before taking themselves out of the race. It should also be noted that in this year’s race the No. 67 Ford GT had early gearbox problems and even crashed into a wall eventually finishing 9th out of 14 cars.

The next event for Ford will be at Watkins Glen on July 3rd.