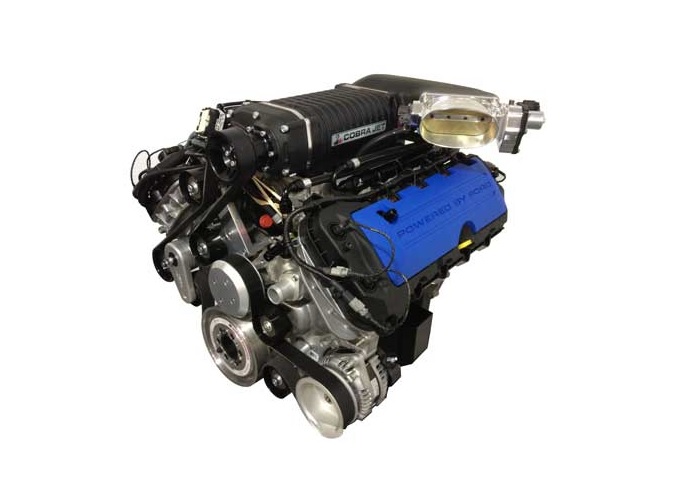 If you want your Ford Mustang to pack the power of the 2014 Ford Mustang Cobra Jet drag racing package without having to actually purchase one of the 50 Cobra Jets sold, you are in luck as Ford Racing will begin offering the supercharged 5.0L Coyote V8 as a crate engine option. With this new crate engine option, your daily driven Mustang can pack the same power as the incredible Cobra Jet that is restricted to track use…provided that you live in an area where you can get away with an engine like that.

The new Cobra Jet 5.0L crate engine is identical to the unit used to rocket the current Ford Mustang Cobra Jet down the quarter mile in the NHRA Super Stock category. The Cobra Jet 5.0L V8 begins with an all aluminum 5.0L engine block topped with a set of specially prepared Boss 302 cylinder heads, the Boss 302 intake and exhaust camshafts, a ported Ford Racing intake manifold, a forged steel crankshaft, Mahle pistons, Manley connecting rods, a Whipple 2.9L supercharged and all of the other smaller components that go into making this motor run. Ford does not quote a power output for the Cobra Jet engine as actual output varies based on the tuning efforts behind each individual motor but with the potential to push the Cobra Jet drag car down the quarter mile in the 8 second range – you know that this engine can make some monster power.

One of the key “problems” with the 2014 Ford Mustang Cobra Jet race car is the $100,000 price tag and it should come as no great surprise that the race-ready Cobra Jet crate engine also comes with a big price tag – $28.600 to be exact. This makes it a fairly pricey option as crate engines go but for the diehard (and deep pocketed) Mustang enthusiast who wants to build his or her own Cobra Jet race car to drive on the streets, this engine is the first step towards that goal.