Hardcore Ford Bronco fans still have some waiting to do for official word on the ACTUAL 2020 Bronco. If you have a really good eye, you can actually see the 2020 Ford Bronco’s shadowy silhouette around the Baby Bronco. Off-Road.com first published a leaked a photo of what was then thought of as the actual 2020 Ford Bronco. Since then, Motor Authority has actually confirmed that this is Ford’s unnamed “baby Bronco”.  The “Baby Bronco” has already been teased at earlier this year but at least this new photo gives us a better idea of the design than the original teaser image. 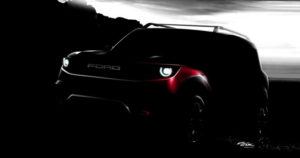 Some different design cues include a more squared off front clip and full circle LED headlights which closely resemble the original Broncos of old. Earlier this year Ford trademarked some possible name fits including “Maverick” and “Timerbland. ” This little off-road crossover (which is based off the Ford Focus) will be a direct competitor to the Jeep Compass and Renegade.

We are still expecting the “Baby Bronco” to be on sale next year as a 2020 model.