October is Breast Cancer Awareness month. For many entities in the NHRA’s Mello Yello professional series, that offers at least three opportunities to brandish pink liveries in support of women – and men – that contract the disease. Races at Dallas (Oct 4-7), Charlotte (Oct 12-14) and Las Vegas, Oct 25-28 all take place during Break Cancer Awareness month.

Not waiting even one day, John Force Racing announced on the first day of October that its two female drivers, sisters Brittany and Courtney Force will sport pink Advance Auto Parts race cars at the upcoming AAA Texas NHRA FallNationals and a week later at the NHRA Carolina Nationals. Their livery features TrueTimber’s Sassy B pink camo (camouflage) pattern, making a statement while expressing support of breast cancer awareness. 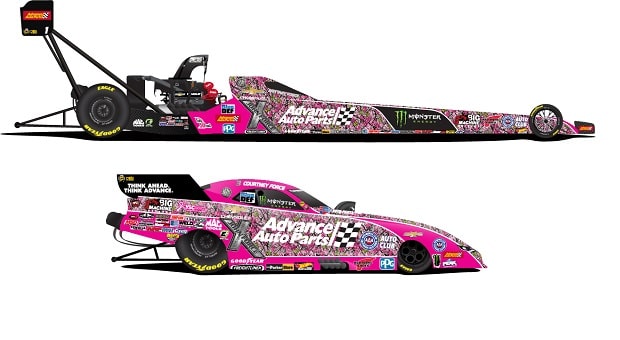 The duo will support charitable organizations focused on helping survivors and those currently diagnosed with breast cancer, the team announced.

Brittany Force’s Top Fuel dragster supports Brakes for Breasts, an organization comprised of more than 100 independent auto repair shops. These shops, based across the country, support the research of a vaccine to cure breast cancer. For every brake service performed at a participating shop, customers will receive brake pads for free and will pay only for labor. The participating shop donates 10% of that brake service to The Cleveland Clinic Breast Cancer Vaccine Research Fund.

Courtney Force’s Funny Car once again  brings awareness to the Young Survivors Coalition (YSC), an organization dedicated to the critical issues unique to young women under the age of 40, who are diagnosed with breast cancer. YSC is now in its 20th year of operation.

Advance Auto Parts, featured on both Brittany and Courtney’s hot rods, adds additional support for the charitable groups each driver is supporting, by donating a portion of the proceeds for every set of CARQUEST  brake pads sold to customers of Brakes for Breasts. The company will donate one dollar to YSC for every battery tested and installed.

Both drivers had the opportunity to help design their TrueTimber Sassy B pink camo-schemed racecars. “It’s got some hot pink and the great part about ig is it’s going to match my sister’s car,” said Brittany Force. “I’m really honored to be able to have this opportunity to drive a race car that helps support an organization such as YSC,” added Courtney Force.

The Force sisters’ recognition of the importance of breast cancer awareness follows the example started by Alexis DeJoria, who brought mammograms to race attendees at both Dallas and Las Vegas, when the Texas race was held later in the Countdown to the Championship playoff series. DeJoria’s Kalitta Motorsports Toyota Camry Funny Car always dressed in pink for those two races, as well. It’s not known whether this goodwill promotion will continue to the penultimate race of the year in Sin City.