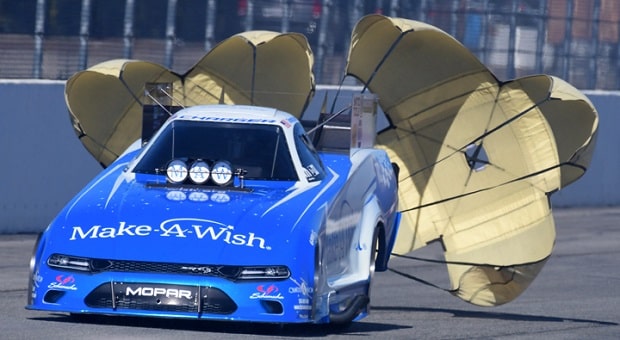 Winning isn’t easy in any form of motorsport. No matter whether the competition is between single or multiple competitors, it’s tough to see that checkered flag or win light before the other car or motorcycle.

After Chandler’s death, her husband Doug elected to continue the program for both Johnson and Beckman. His two race cars have been competitive in every outing, but for Johnson Jr. the wins have been few and far between. That ended this past Sunday in the 22nd annual Route 66 NHRA Nationals at Route 66 Raceway outside Chicago, IL.

It was there that the car tuned by JohnCollins finally made its way to the NHRA Winner’s Circle, giving this segment of DSR its first victory since the World Finals at Pomona in 2017. Now, that’s a 32-race drought. This victory marked Johnson Jr.’s 18th career win in his second final round appearance of the 2019 season and his 50th final round overall in a career marked by driving, testing, crewing, testing, driving at various stages along the way. 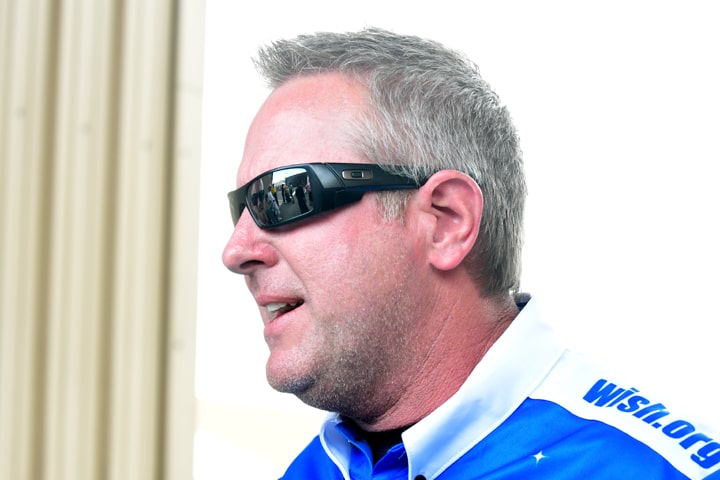 Johnson Jr.’s team has been beset by blow-ups over the past year and this race was no different as his engine exploded feet before the finish line timing beams. Still, his blow-up was late enough to thwart his competitor Robert Hight, whose Chevrolet Camaro SS from John Force Racing was a tenth and a half of a second behind the Dodge as he smoked the tires on his run. Johnson Jr. turned 4.175-sec at 229.86mph to best Hight’s 4.438 at 202.55.

Johnson qualified second and advanced past Paul Lee, teammate Matt Hagan and John Force to meet Hight in the finals.

“It makes your heart stop for a second, because you’re sitting there coasting and you know he’s got to be there somewhere,” Johnson Jr. said of his winning pass. “It’s the longest coasting you’ve ever done in your life.

“I saw the win light come on and I was just so thrilled for the guys and (team sponsor) Doug Chandler. He continued this program in his wife, Terry Chandler’s, honor, so I’m happy we could get this win for him. We’ve been close a lot – six times we were there in the final and couldn’t get it done – so it was nice to finally do that.”

The Make-A-Wish Dodge Charger SRT Hellcat has a star on its roof, purchased in Terry Chandler’s honor by the St. Louis Make-A-Wish chapter. It was crew chief Collins’ idea “to put the coordinates of her star on our roof hatch,” Johnson Jr. explained. “The roof hatch comes up every time I get out and every time I turn around and look at it, I see the coordinates, so I know she’s always there. She’s a lasting impact on our team and she’ll be with us forever.”

Johnson Jr. had confidence coming through four qualifying sessions and into Sunday eliminations. “This is a track where we’ve had a lot of success,” he said. “I think we’ve been in the finals four of the last six years here. I’m not superstitious, but the way the weekend went,” as he earned six qualifying bonus points, “things just kept pointing to it. I felt good about it. I went up there for the final and really wasn’t even nervous.”

The victory brought Johnson ever closer to points leader Hight, who has 818 points. Johnson Jr. has 650 points in second place, followed by Capps with 610, John Force (596), reigning titleholder J.R. Todd (593), whose Kalitta Motorsports Toyota Camry exited in the first round, Hagan with 559 points, Beckman’s 553, Tim Wilkerson in his new Ford Mustang with 495, Kalitta’s Shawn Langdon (435) and Bob Tasca III with 401 points.

There’s no time for the Make-A-Wish crew and driver to savor their victory as next weekend, June 7-9, marks the Menards NHRA Heartland Nationals at Heartland Motorsports Park outside Topeka, KS., the second in a four-races-in-four-weekends flog. 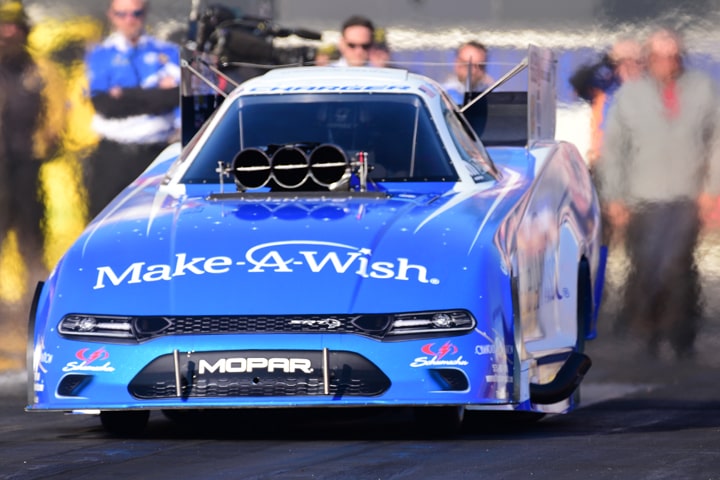