Remember the name: Ernie Francis, Jr. This racer is 20 years old, a member of NASCAR’s Drive for Diversity program, a four-time Trans Am champion (three in the TA4 class and last year’s lead TA title) and a success everywhere he races.

Fort Lauderdale, Fla.-based Francis’ father Ernie bought him a kart when he was only four years old. Young Ernie graduated to Spec Miata competition at 13 and went SCCA Pro Racing at the age of 15. Ernie Francis Jr took Trans Am by the teeth and threw himself into that competition, debilitating the TA4 class for three years running in a Ford Mustang, moving into the premier TA category and tearing it apart in his first year, also in a Mustang.

Everything Ernie Francis Jr. has earned, he’s earned. On merit. There’s sufficient competition in his TA class to keep him from being the kind of winner Tommy Kendall was back in the day, and the list of competitors wanting to run the Trans Am Series presented by Pirelli keeps growing. Even former NASCAR Cup champ Bill Elliott is competing in the TA2 category (Awesome Bill’s initial outing wasn’t what he’d hoped for, as he only completed 29 laps and finished 17th in the 20-car TA2 field).

With a diverse schedule for the 2018 season, Ernie Francis Jr is all over the sports car map, racing in Trans Am, Pirelli World Challenge and in NASCAR-sanctioned events. He’s raced an Audi R8 GT3, driven an Oreca/Nissan racecar and even tested an Indy Lights Sam Schmidt racecar toward the end of 2016. The objective is to learn, improve and move his capabilities forward. Ernie is doing this with the intent of moving into the upper reaches of endurance racing and, perhaps, NASCAR. 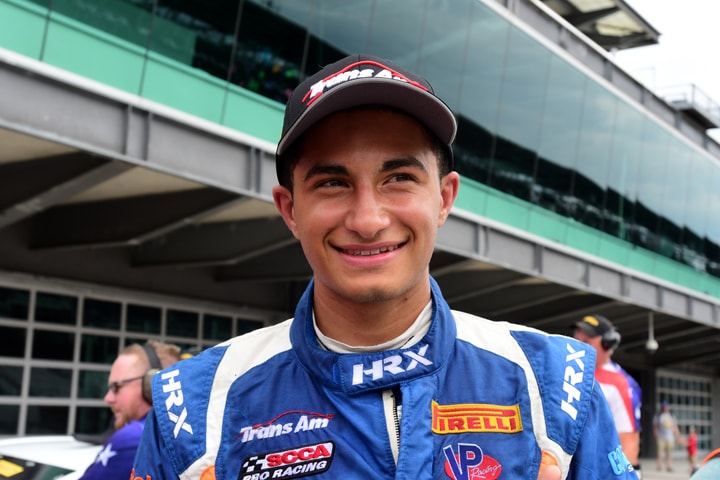 “I grew up watching Le Mans and it gave me butterflies. I want to be there and I don’t really care where I have to go to be there, whether through NASCAR, through IMSA or even INDYCAR. I’ll do whatever I have to do to get there and race there. Hopefully I’d win at it; I’d be pretty happy about that,” he said.

Ernie Francis Jr. earned his fourth 2018 TA-class Trans Am contest at Mid-Ohio Sports Car Course the second weekend of August, in a multi-class shootout that was rife with incidents. Starting in seventh place in his No. 98 Frameless Shower Doors Mustang, Francis was in second at the close of the first lap behind pole man Paul Fix’s similar Ford. Multi-class traffic kept Francis relentless in his pursuit of Fix, all while having to stop to remove grass clippings from his grill.

Francis returned to the battle and reclaimed second, even as the race leader fell back into the field in a second full-course caution on the 24th of 45 laps. That set up a fight that actually didn’t happen, as Fix punctured a tire, allowing Francis to romp to the checkers for his second straight win at the Ohio racetrack. “It was definitely an eventful race for us. We knew it would be difficult starting near the back, but I knew the car had pace in it.” Knowing other cars would need to clean their radiators from the green waste, Francis was determined “to be the first to do so and make it. Then things came our way.”

Ernie Francis Jr has become proficient at getting things to go his way. Will he continue his charge through the sports car ranks? Only time will tell, but truly, this is a kid to keep your eyes on.

About Anne Proffit 889 Articles
Anne Proffit traces her love of racing - in particular drag racing - to her childhood days in Philadelphia, where Atco Dragway, Englishtown and Maple Grove Raceway were destinations just made for her. As a diversion, she was the first editor of IMSA’s Arrow newsletter, and now writes about and photographs sports cars, Indy cars, Formula 1, MotoGP, NASCAR, Formula Drift, Red Bull Global Rallycross - in addition to her first love of NHRA drag racing. A specialty is a particular admiration for the people that build and tune drag racing engines.