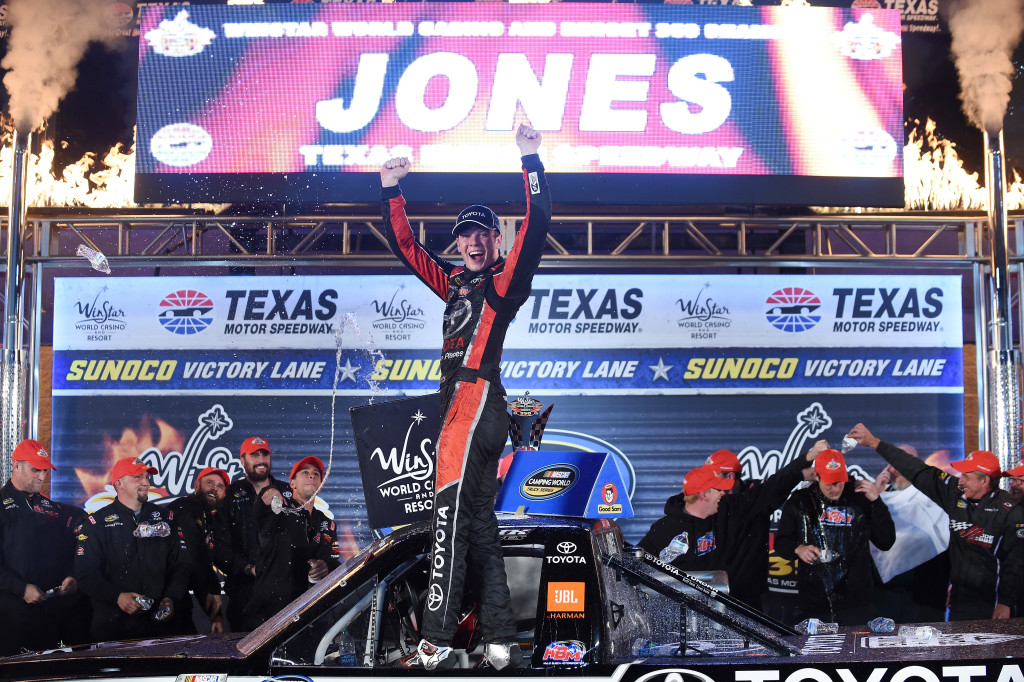 NASCAR Truck points leader Erik Jones stole the show on Friday night, winning the WinStar World Casino and Resort 350K at Texas Motor Speedway and showing redemption by putting his No. 4 Toyota Tundra team back in the spotlight after struggling last weekend in Martinsville.

Jones’ run to the finish was impressive, although he wasn’t alone.  He worked to hold off Ryan Blaney, defending champion, Matt Crafton, and at the end, his Kyle Busch Motorsports teammate, Daniel Suarez, dominating for 117 of the 147 laps.

The victory gives him control of his own destiny, extending his points lead from 10 to now 17 over Crafton and 21 away from Tyler Reddick with only the Phoenix and Homestead races left on the schedule. 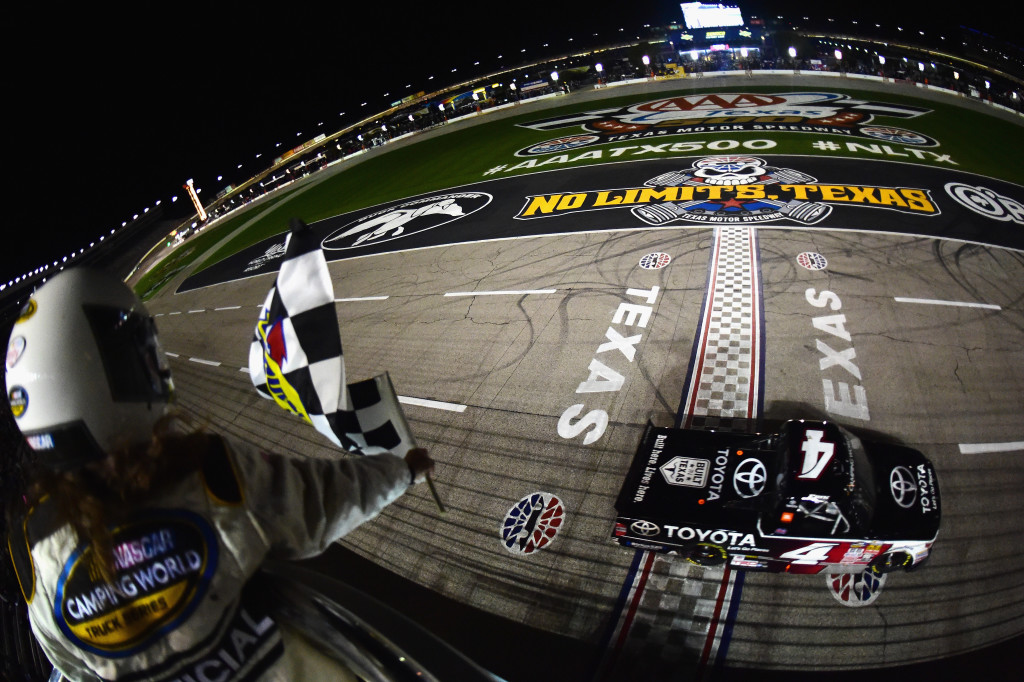 “Getting the win here, that’s a nice boost for everybody, not just for me but everybody at KBM,” said the seven-time truck winner, Jones.   “We needed this to get back on track.  We’ve struggled a little bit the last month, month and a half and worked hard to get back to this point.

“And now, to go out there and win one the way we did, and lead as many laps as we did, that’s a really nice statement for us.  I hope that we can go to Phoenix and do the same kind of thing we’ve done the last two years.  It’s nice to have that points lead back up closer to the 20-point range than the 10 range, but we still have two more weeks, and we have to hold onto it, be strong and close this deal out.” 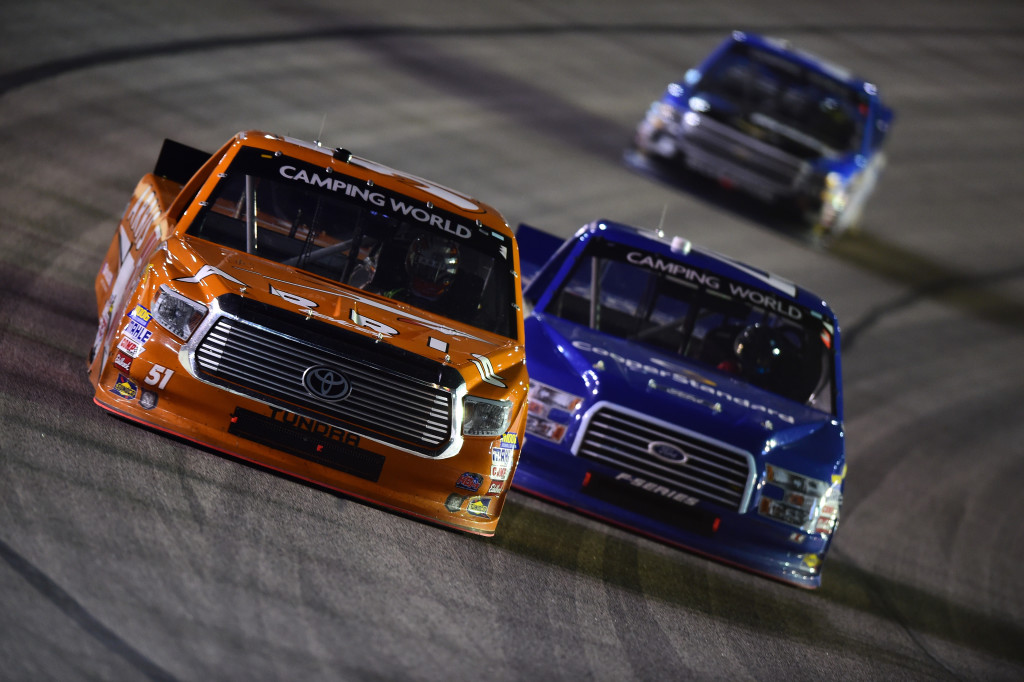 In a hurry, Erik Jones won the fastest race in NASCAR Camping World Truck Series history with an average speed of 158.002 miles per hour with only one caution flag displayed for five laps for debris cleanup on lap 55.  Jones assumed the lead on lap 100 after his last green flag stop, deflecting late chargers never to be rebuffed again.

The top five at the end of the WinStar World Casino 350K were E. Jones, Suarez, Blaney, Crafton with Timothy Peters in fifth.  There were seven lead changes among five drivers. 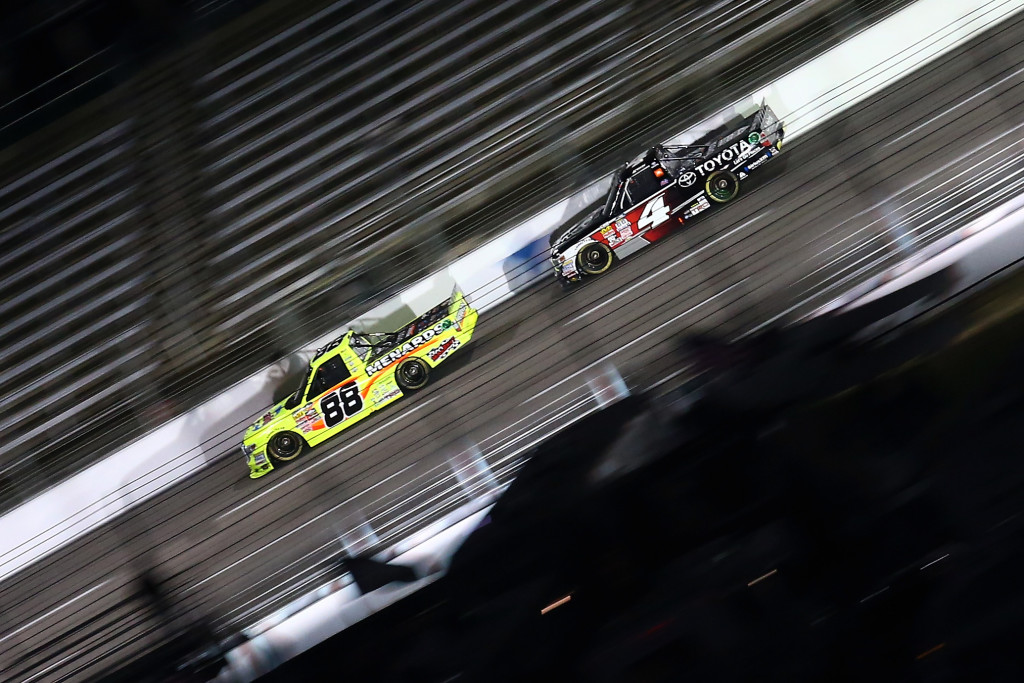 The next NASCAR Camping World Truck Series event is on Friday, November 13, at the Phoenix International Raceway for the running of the Lucas Oil 150 starting at 8:00 p.m. EST on FOX Sports 1.