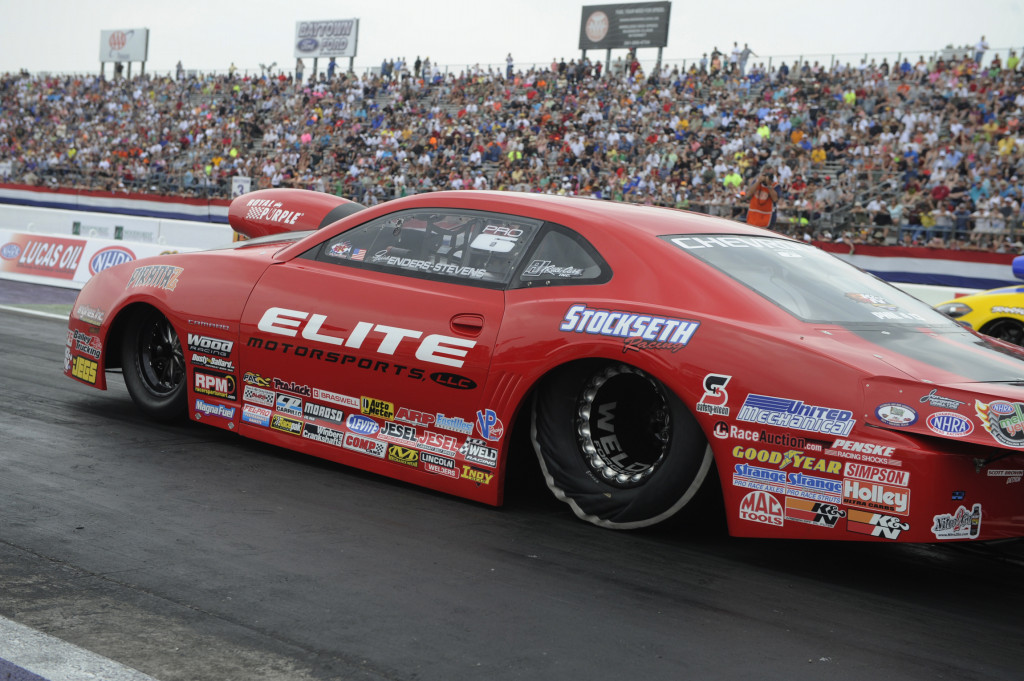 The Houston O’Reilly Auto Parts Spring Nationals at the Royal Purple Raceway was full of surprises: Pro Stock’s Erica Enders-Stevens made it No. 99 for women in drag racing, while Robert Hight grabbed his third Funny Car win and Antron Brown took top honors in  Top Fuel.

Erica Enders-Stevens won the O’Reilly Auto Parts Spring Nationals in her Elite Motorsports Pro Stock Chevrolet Camaro, scoring Enders’ second win of the season and adding the 99th victory by a woman to the chronicles of the Mello Yello Drag Racing Series.

It wasn’t an easy road for Enders-Stevens at her hometown track, but she made it to the finals, battling Allen Johnson to end up winning on a holeshot with a 6.594-second pass at 210.60 mph.  Johnson, the 2012 Pro Stock world champion, ran a time of 6.588 seconds at 210.28 mph.  Even though Johnson ran the quicker elapsed time, Enders-Stevens’ better reaction time enabled her to keep her slender lead the whole race with a .202-of a second margin of victory at the line.

“My team’s been really awesome,” said Enders-Stevens.  “I’ve had a really consistent race car.  That’s what it takes Sundays, consistency.  We had to make a last second transmission change and go through the gears to make sure everything was right.”

The win was Enders-Stevens’ eighth career victory and her first professional win in Houston.  She is the current Pro Stock points leader and the only female in Pro Stock history to lead in the points category.  She has enjoyed the early successes this season but knows that she must keep it up to remain atop the Pro Stock class.

Enders, who won in Super Gas in 2004 in the Lucas Oil Sportsman division at Royal Purple Raceway, defeated Matt Hartford, Jason Line and a tough Jeg Couglin to reach her 21st career final round.

Allen Johnson was the No. 1 qualifier at the event and reached his third final of the season.  With two wins this season at Phoenix and Gainesville, he leaves Houston second in Pro Stock points trailing EES by 77-points.

Greg Anderson returned to the cockpit of his KB Racing Summit Racing Chevy Camaro after getting clearance from his doctor after going through heart surgery in February.

“I’m happy with the way things went, overall,” said Anderson.  “This weekend certainly answered a lot of questions and cleared up any reservations I had.  There should be no issue going forward, and nobody is going to give me any more sympathy – especially any of these racers when I line up against them.  It’s time to get back to hard-nose racing, and I’m ready.”

Robert Hight came out on top again this weekend in Houston where he won for the third time this year, extended his streak of consecutive final round appearances to five to lead all Funny Car contenders in 2014.

“It was like we didn’t even show up on Friday,” Hight said.  “It was horrible.  On the first run it got through the clutch and wore it out and eventually smoked the tires.  Second qualifying session we just totally missed it.  It was weak and shook, but I didn’t lose faith in my team.

“Then the first three rounds today ran 4.07, 4.07, 4.07,” said Hight, who won with his quickest pass of 4.055 seconds over Beckman.  “You know how hard that is to do in one of these cars?  There are so many variables.  It’s hard to make that many consistent runs in a row, but it shows how good my team is.  They’re making just tiny changes, and at the last minute.  They never act like there is a fire drill or anything is out of the ordinary, they just put their heads down and do their job.  It’s a lot of fun right now.”

The Auto Club driver picked up his first professional win at Houston in 2005 and since then has won more Funny Car races than anyone other driver in the category.  He also scored his 299th round win on Sunday.

“I had high expectations coming into this weekend because I got my first win here,” said Hight.  “Mike Neff has owned this place.  When he drove and tuned his own car he was, well, just like he was today.  You have high expectations, especially since we’ve been in four straight final rounds.  We’ve been kind of on a roll here.  It dates back to Indy,”

“When you win one of these races, it’s an accomplishment. To have this as my third win of the year, just shows how steady my team is and, truthfully, that just puts more pressure on me because when that car goes up there and runs like it does, a bracket car, all I can do is screw it up. I have got to do my job.

“When you can put three 4.07’s on the board in a row in the heat that mentally wears on your competitors. Some of these Funny Car guys, they’ll roll it in there deep and make their reaction times look good.  Not me.  I want ET.  I want my competitor to be scared and I don’t want to give lane choice away by rolling in deep.  Even in the final, I didn’t roll it in.  When you have confidence in yourself and in the car, there’s no need,” said Hight.

In the final round, Hight set top speed in the Funny Car category with a 314.90 mph run.  Hight’s average ET on race day was 4.069 seconds.  With the win, Hight expands his points lead to 122 over John Force Racing owner and teammate, the all-time winner and 16-time champion himself, John Force. 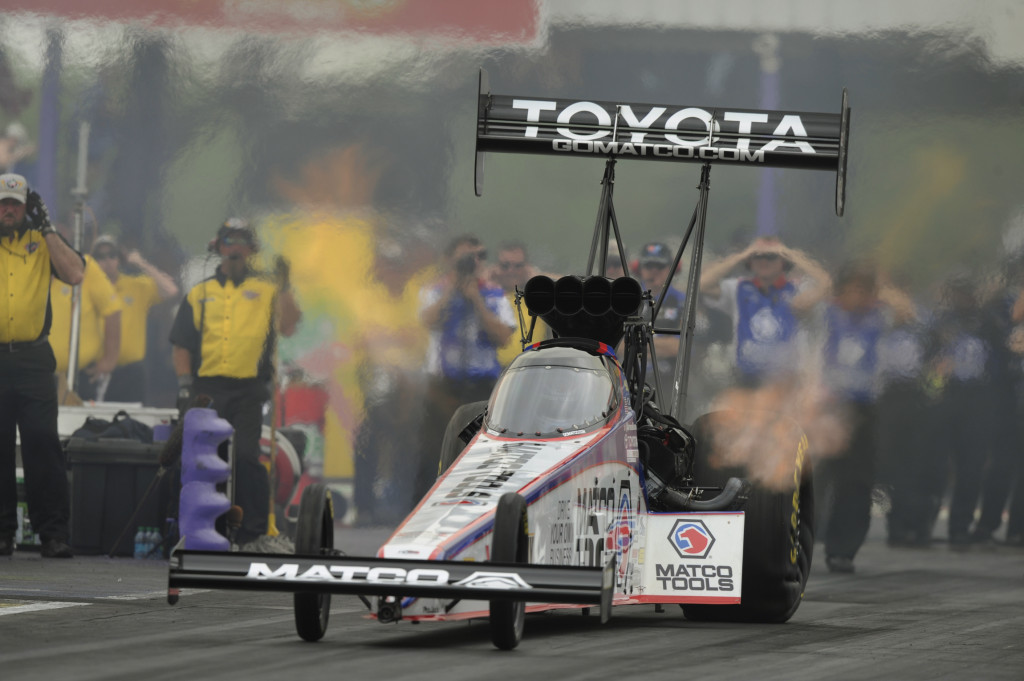 “It was very draining this weekend here at Houston,” Brown said of the humid weather conditions near the Gulf coast.  “It felt like we were running a marathon out here this weekend.  Instead of running like a sprint, it felt like we ran 5,000-kilometers out here.  That’s what made it so tough on all the teams.”

Brown’s Don Schumacher Racing team continue to be the class of the field having advanced to seven of the last 10 final rounds dating back to the St. Louis NHRA race last September.  Brown left with the Wally trophy in hand at five of those races, including two weeks ago at the Four-Wide Nationals near Charlotte.

After creeping up on the tune-up on his dragster this weekend, Brown’s Brian Corradi and Mark Oswald-tuned car started from the No. 2 qualifying position.  Brown posted his quickest qualifying lap on his final attempt at 3.787-seconds.

“We’ve just been able to execute,” Brown said after earning his second career Top Fuel win at the Baytown track (2008).  “When we have a problem we’re able to fix it from the last round and make it better for the next round.  This track was good.  We had shade all weekend long, it was breezy.  The water grains in the air made our tune-up go haywire where you come up here thinking that you have power because you’re at sea level but all the humidity just sucked the life out of the cars and made it hard to make them go.  That’s what made it difficult for us this weekend, not just us but everybody.  We were able to fight through it and to get that win it makes it that much more sweeter because you were able to fight through that adversity to get it done.”

With his 44th career win, Brown vaulted into first place in the NHRA Mello Yello Series standings a quarter-way through the 2014 season and now enjoys 37-point lead over Doug Kalitta.

Brown, who won the 223rd race for DSR in Houston, will attempt to win consecutive races at Atlanta Dragway in three weeks.  Brown has five career wins at the Commerce, Ga. track, including three in Top Fuel.

That will be NHRA’s next stop, the Atlanta Dragway for the Summit Racing Equipment Southern Nationals on May 16-18. 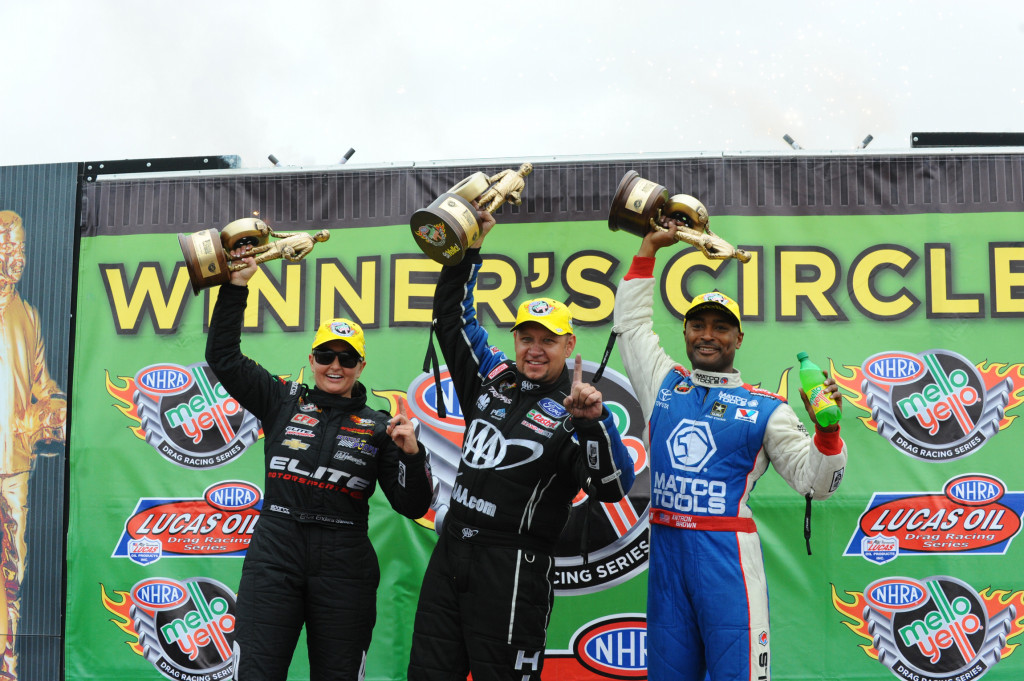