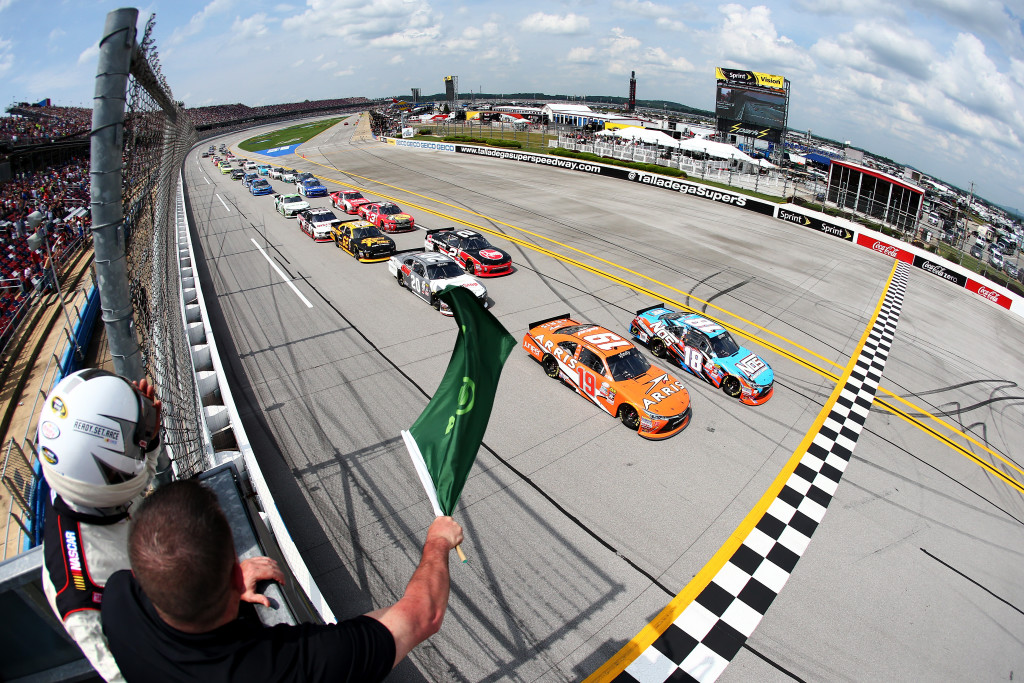 Things were tense right after the ending of the overtime finish of the Sparks Energy 300 NASCAR Xfinity Series event at Talladega SuperSpeedway on Saturday.  It came down to a spectacular finish and after all the dust had settled, there were two race cars parked at the finish line with NASCAR going over the video to decide the actual winner of the race.

After it appeared visually that Brennan Poole had won his first NASCAR race reaching the finish line first, the field was frozen under NASCAR rules at the exact point of the caution flag clearly showing that Elliott Sadler was the leader, snapping his 65-race winless streak being declared the winner at Alabama’s 2.66-mile speedway.  It was his 11th career Xfinity win.

Building up to the big finish began with the cars of Jeb Burton and Erik Jones tangling coming off the front stretch with three laps to go, bringing out the yellow flag and bunching the field back together with Joey Logano as the leader of the tight Talladega pack.

That led to the second straight week the Xfinity series has extended the finish into an overtime mode.  The super-fast two-lap dash after the green flag arrived to the conclusion of 26-lead lap cars coming off turn 4 all jostling and swapping for position. 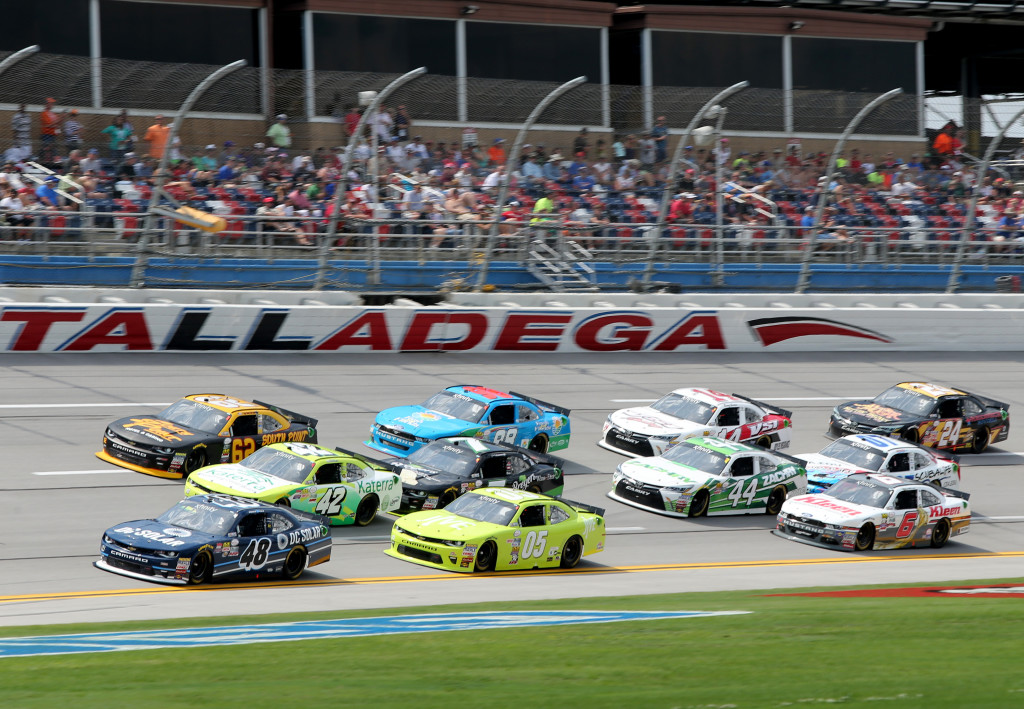 It was a sensational battle for the lead in the tri-oval, seeing Joey Logano holding off the progression of Elliott Sadler on his outside, diving back to the inside to block only losing control of his Penske Mustang and spinning in front of the field with Blake Koch later delivering a hard impact.  Sadler drove straight ahead with nowhere to go and slammed into Logano, sending his JR Motorsports No.1 Chevy sprawling towards and below the yellow line, almost into the infield grass.

The rest of the field plowed through, seeing the two distressed leaders out of control and opportunity’s door widening in pursuit of reaching the finish line first.  The crowd saw Brennon Poole, Justin Allgaier, and Jeremy Clements crossed the line 1-2-3 with the final call being made after waiting to hear the decisive move five minutes afterwards saying Sadler was the leader by NASCAR scoring officials. 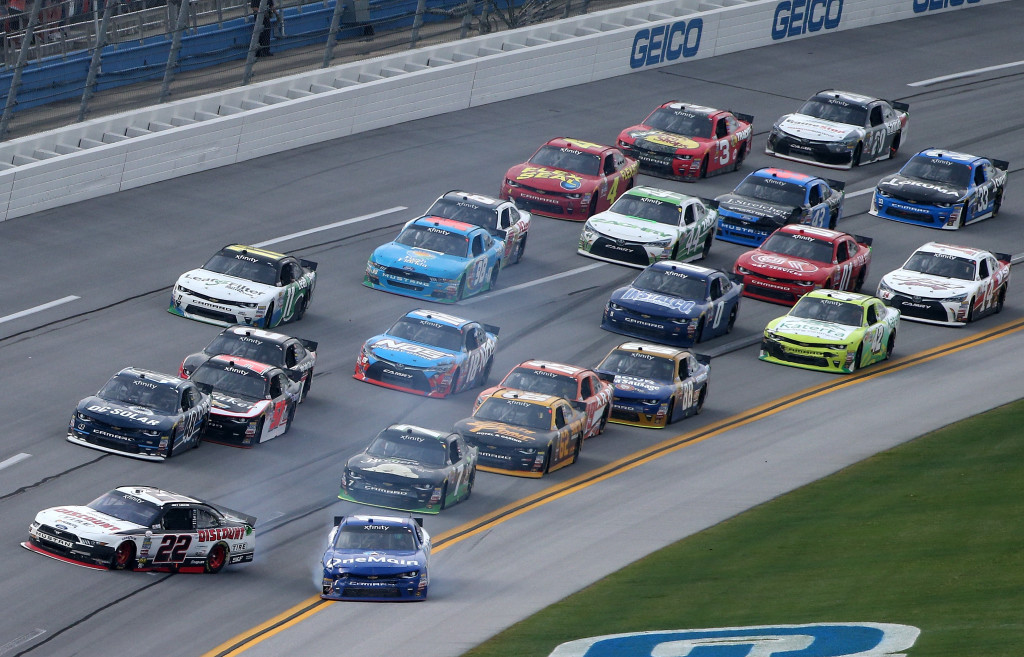 “I was going to try to get to the outside of Joey,” Sadler said.  “He made a great block, I went back to the inside and then I just held it straight.  I’ve had some races I’ve done some good driving and some I’ve probably done badly, but I feel like that was one of the best saves I’ve ever made through the grass to keep it straight.”

After a review of scoring, it was discovered that JR Motorsports had actually taken the first two spots with Justin Allgiaer revealing to be just ahead of Poole.  If that wasn’t enough to celebrate, it just happened to be Sadler’s 41st birthday.

“It’s a great birthday gift to me,” said an emotional Sadler, whose winless streak dated back to May 2014 at Talladega.  “We really needed this win.  I told everybody this morning, ‘We’ve got the car to win this with.  Things went our way, we had a little luck, and we were able to make it at the end.”

The victory was Sadler’s second in the series at Talladega and the 11th of his career and getting the checkers at Talladega has entered him into the NASCAR Xfinity series Chase of 12 joining Erik Jones into the hunt for the year end championship.

The young 25-year old Brennan Poole had a rush of emotions flowing through him wondering if NASCAR had put out the caution before he had reached the line anticipating his possible first win.  In hopes of good vibes, he parked at the finish line opposite of Sadler waiting what NASCAR had to say.  When the announcement was made that the caution flag had come out freezing the field, all the accolades quickly went to Sadler. 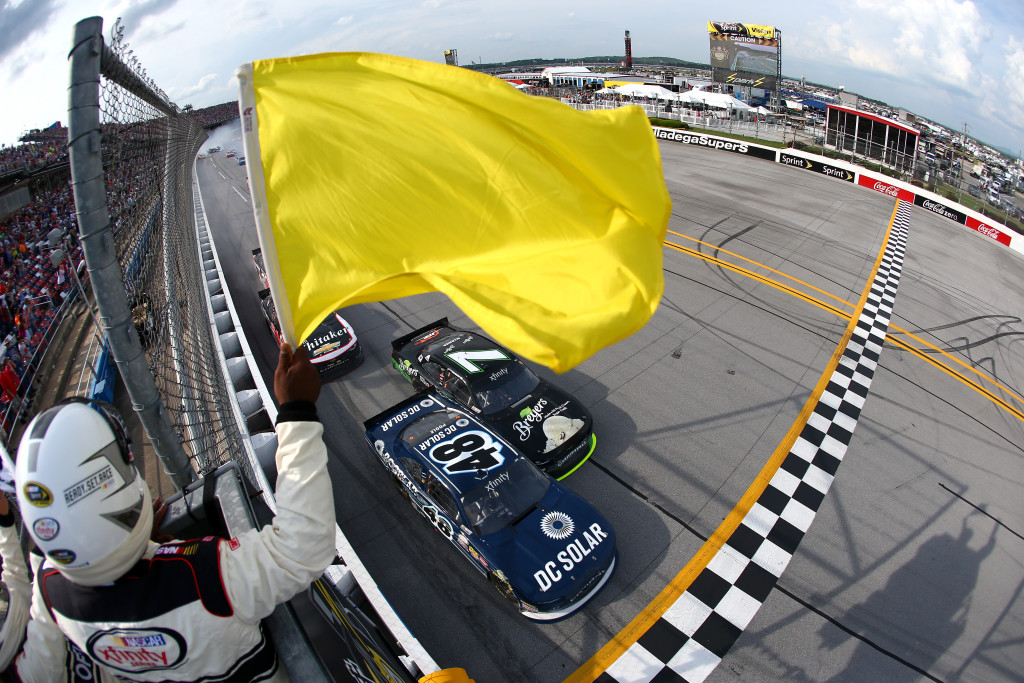 Poole showed maturity beyond his years accepting the outcome in taking his close loss with grace and dignity that brought this young man much respect among his peers.

“I think I’m upbeat today because I had so much fun racing with everybody,” said Poole.  “It was just a blast.  As I was waiting there [for the decision], I was thinking, ‘Man, hopefully the caution didn’t come out as early as I think it came out,’ and I’m hoping we raced to the line.

“But at the same time, (I thought) hopefully NASCAR gets it right.  I want the guy who deserves to win the race to be the winner and go by the rules.  According to the rules, Elliott was the winner.  I can’t be mad about it.  It is what it is.”

The average speed of the Sparks Energy 300 was 132.477 mph resulting from six caution flags for 29 laps.  There were 20 lead changes among 12 drivers with Sadler leading only one lap, but the most important one of the day.

Next weekend, the NASCAR Xfinity tour takes a deserved weekend off resurfacing in two weeks for the Xfinity 200, the third Dash4Cash race in the series, at Dover International Speedway on Saturday, May 14 airing on FOX Network at 2:00 p.m. EDT.