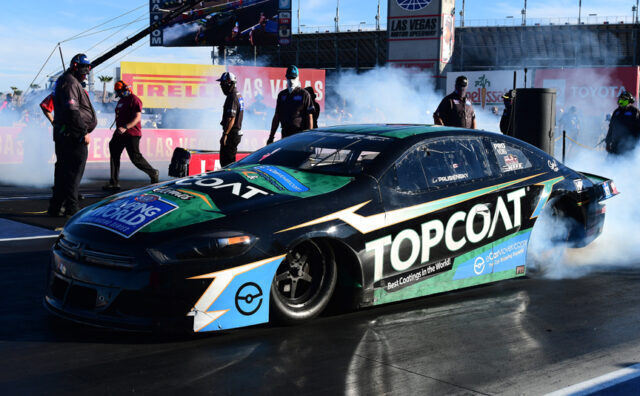 Long the lone Dodge ranger in NHRA’s Camping World Drag Racing Series’ Pro Stock class, Alan Prusiensky is expecting to gain a teammate for the 2021 season that begins in just a couple of weeks at Gainesville, Fla.

When he arrives at the 52nd annual Amalie Motor Oil Gatornatioals March 12-14, Prusiensky expects to have a second Dodge Dart in his stable, driven by Mike Callahan. Callahan, who intends to earn his Pro Stock license during the previous weekend’s CTECH World Doorslammer Nationals presented by JEGS, has support from Artisan Coffee, a company whose logo has been present on the Pro Stock Chevrolet Camaro of Kenny Delco in recent years. That driver has been a helping hand for Callahan as he prepares to earn his Pro Stock entry next weekend.

“I’m excited to get to Orlando and take my shot at getting my Pro Stock license,” the North Texas businessman said. “I have to thank Ron Capossela and Artisan Coffee for this chance, as well as Alan Prusiensky and Prusiensky Racing. Alan and Kenny [Delco] have shown me the ropes for the past couple of years, and now I am gong to take this great opportunity. We will see what happens in Orlando – but I couldn’t be more excited,” Callahan said.

Moving from being a fan to a pro racer isn’t an easy stairway. Callahan has loved classic cars and street rods all his life, exacerbated by his fan attendance at car shows and test-and-tune events. When introduced to Capossela, the coffee purveyor invited Callahan to spend some time working with Delco’s Pro Stock team, which Callahan did from 2018 to 2019, helping to prep Delco’s car at many races.

Callahan spoke with Delco about earning a license and was referred to Prusiensky. Prior to the difficult 2020 season, Callahan joined Prusiensky’s team, learning ever more about the preparation of the Dodge Dart Prusiensky has been racing under, among other partners, the eCarMover banner. The Florida-based company is the top-line car freight company in the United States and could be compared to Kalitta Air, as eCarMover through its founder, John Mingolelli, moves cars for most major manufacturers and rental car companies.

eCarMover is a perfect fit for drag racing and Mingolelli knows it. As he moves his company from supporting a single-car entry in the factory hot rod category to embracing both Prusiensky and Callahan, Mingolelli expressed his love of the sport: “Most of all, we love drag racing and want to be world champions. My goal is to build a program that can give Alan and Mike everything they need to be successful. eCarMover Motorsports will race with the expertise and technical support from Alan, to give both teams double the information every time they hit the track.”

eCarMover has been affiliated with Prusiensky since 2014, when the businessman explored the possibility of racing a Ford Cobra Jet. The duo connected and immediately bonded, thanks, in part to their shared commonalities and Mingolelli’s appreciation for Prusiensky’s singlehanded development of his own Dodge program. Mingolelliu realized the program needed consistency and building power; he aims to help provide those qualities.

“Having eCarMover on our Dodge Dart will be a big help this season, plus having a second race car on the track will definitely help with data and fine-tuning our program,” Prusiensky noted. “I have a great team and we are pouring our hearts into this Pro Stock program. I am looking forward to getting to the Gatornationals and getting the season started.”