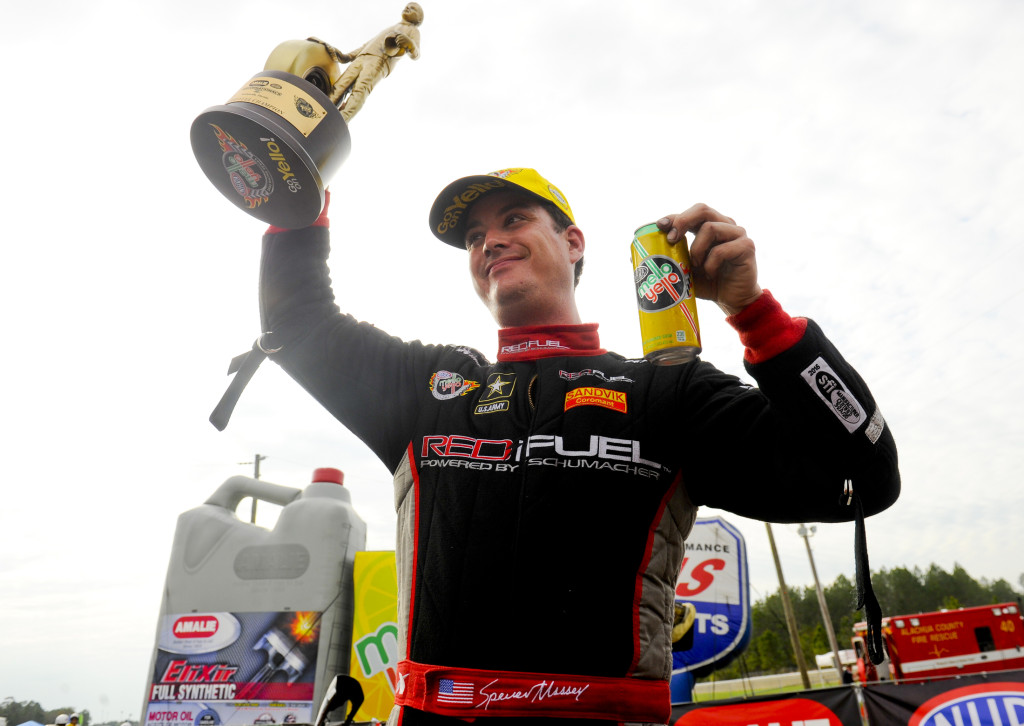 Spencer Massey and Ron Capps gave their boss, Don Schumacher, an injection of the best medicine ever by winning the nitro categories, respectively, at the Amalie Oil Gatornationals. Schumacher made it to his first race of the season after undergoing cancer treatments. He was welcomed back with open arms by his teams and fellow competitors.

In the other classes, Greg Anderson ended a 60-race Pro Stock losing streak, and Karen Stoffer came back to win the Pro Stock Motorcycle season opener. 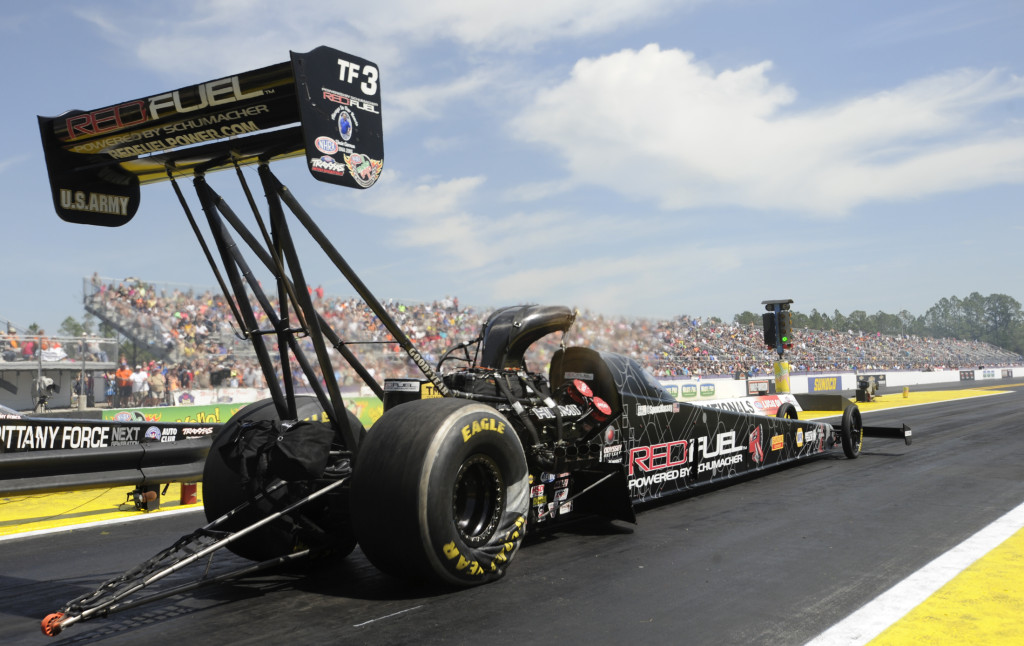 The normal jovial Spencer Massey got his chance to really deliver for DSR and Don Schumacher, personally, this weekend.   The Gatornationals is a big race, and this was Massey’s first win at the stoic Auto-Plus Raceway.  To be able to hand Schumacher his Wally after successful cancer surgery and treatment that ended on Feb. 20, was just what the doctor ordered for both owner and driver.

After qualifying second with a 3.793-second lap at a track record 329.02 mph, Massey and team improved in the opening round of Sunday’s eliminations with a 3.768-second lap at 329 mph.

But it wasn’t an entirely easy day for the Red Fuel team. There were problems in the DSR pits between rounds that had to be addressed.

“We went to go warm the car up before that second round and we found that we had some issues in the clutch,” Spencer said.  “We ended up getting Matt Hagan’s Mopar Express Lane team over and we all work well as a team.  That’s how all of Don Schumacher Racing works, if anyone has a problem there is going to be other teams coming over to help.

Spencer faced DSR teammate Tony Schumacher in the final round and now has a 4-1 record against the eight-time champ in final round appearances.  He used a .020 reaction-time against Schumacher to get a holeshot win over the defending series champion.

“Running Tony Schumacher in the final round, that car has been running extremely strong,” said Massey.  “We know how well that car can run and Tony can be deadly on the starting line.  I had to do whatever I had to do.  It worked out.  It’s just crazy.  I never want it to end.”

Massey’s win was No. 245 for DSR, and he had a special message for the team owner. “Don, to have you here, for us both to have won, it’s really what it’s all about. You have no idea how hard our hearts were hurting for you and how much we were thinking about you this entire time.  To not have you there is totally different.  To see you show up yesterday, it brought a tear to my eye.  To sit here with you, thank you.”

The other big news of the weekend was  three-time Top Fuel champion Larry Dixon’s spectacular crash in Saturday’s qualifying round. The Bob Vandergriff Top Fueler literally split in half in front of the foot box, and Dixon was very fortunate to be able to walk away from the accident.  After going airborne, and propelling his car lengthwise nearly 700 feet in the air, it went out of control near the finish line crashing back on the ground violently before stopping.  The entire crowd let out a sigh of relief when Dixon emerged unharmed. 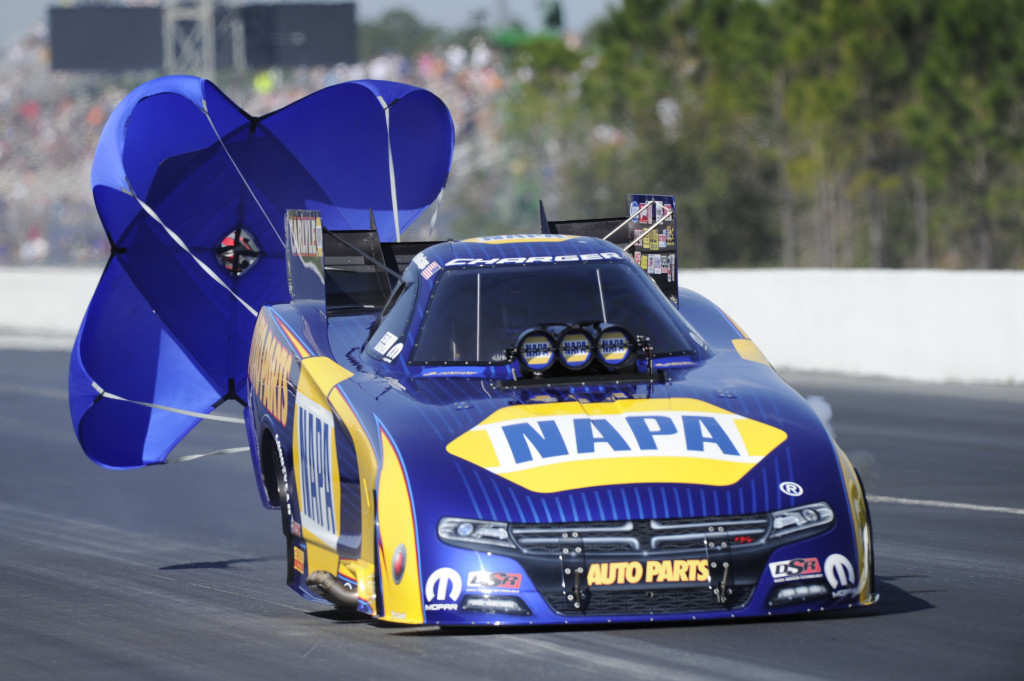 Crew chief Rahn Tobler has been making major changes to the NAPA 2015 Dodge Charger R/T’s clutch system while adjusting to an all-new carbon fiber body; and Capps’ exceptional reactions at the starting line combined to move the NAPA team up to second place in points.

“Tobler has been trying to make our NAPA Funny Car better with a new six-disc clutch system that will be the way for us to go,” Ron said.  “But he wasn’t comfortable with it after the first qualifying session on Friday and switched back to the five-disc.  That’s not easy.  On Sunday we were winning close races all day because he went with what he was most comfortable with.”

Capps was first to leave the line in the first round against Courtney Force then eliminated No. 1 qualifier Cruz Pedregon in the quarterfinals.  In the semis, Capps was first to leave again and beat a slightly quicker Tim Wilkerson by a few inches.  In the championship round, he ended rookie John Hale’s hopes of getting his first NHRA Wally trophy.

“The Dodge people worked real hard on this new car, and while I was happy for Matt when he won at Pomona and Phoenix, I had wanted to get them the first win with the new body,” Ron said.

“They really did their homework,” said Capps.  Don (Schumacher) and Dodge really worked hard together as a team to get back to the top.  We won a lot of races with the old Charger but this new one is like night and day.”

Ron’s win helped mark the 43rd time DSR doubled up at an event. 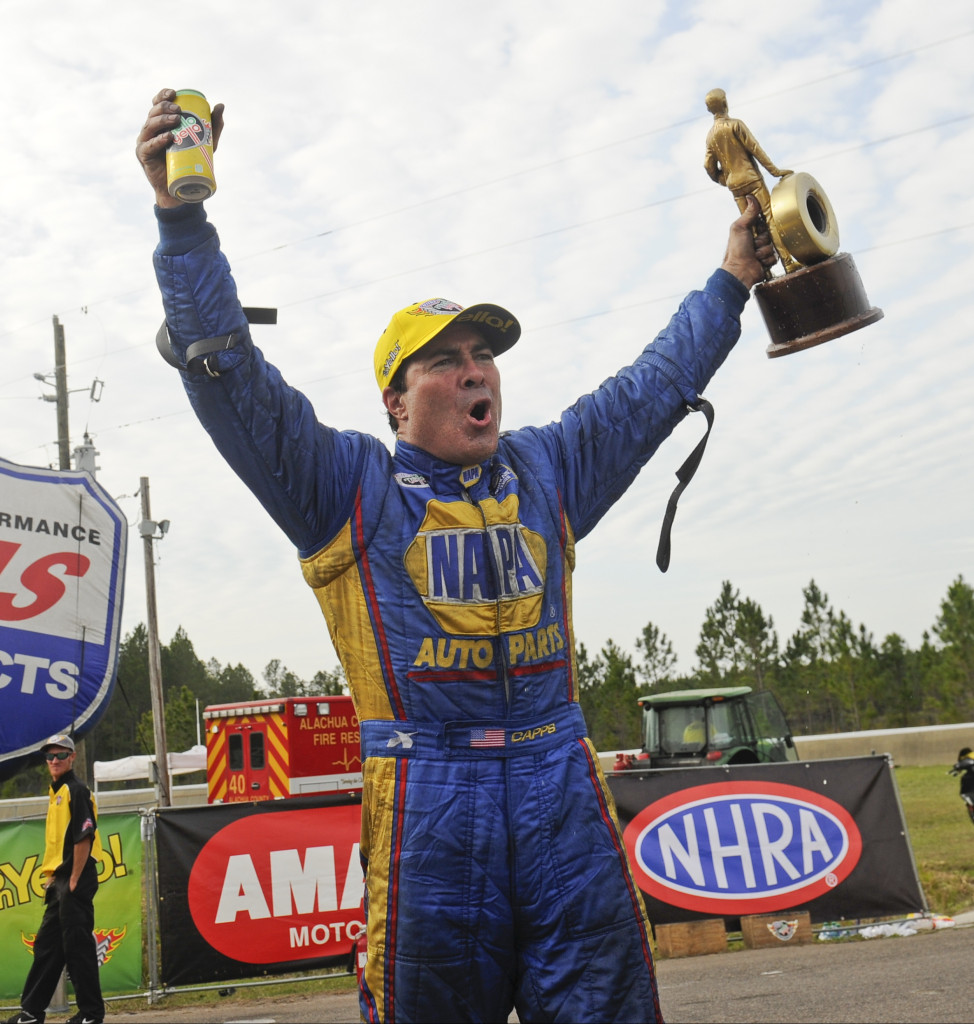 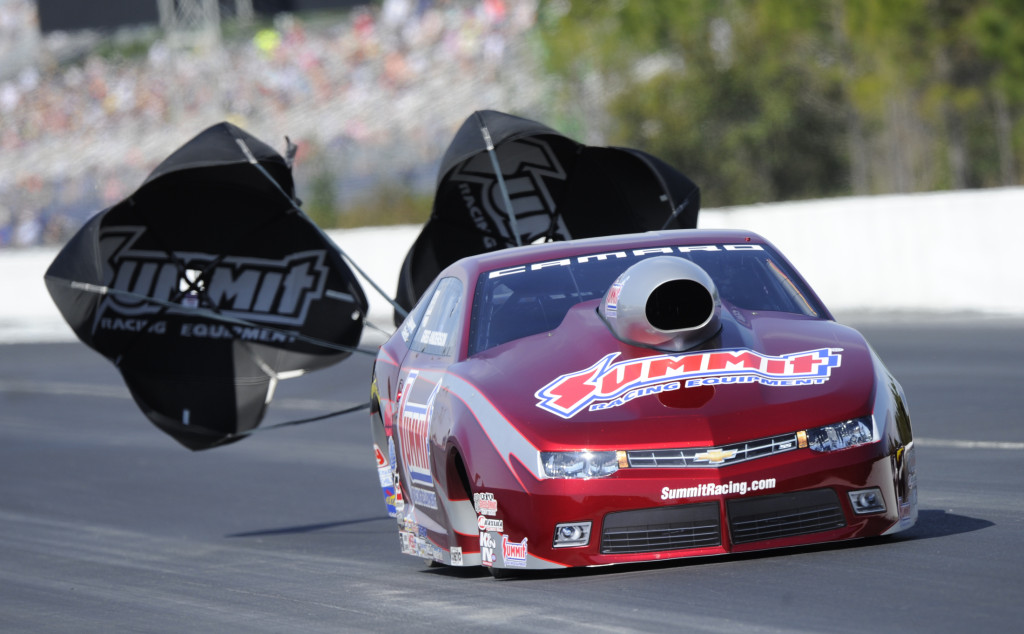 It was a long time coming, but Summit Racing Pro Stock driver Greg Anderson  finally hit a milestone that has been just out of reach for nearly three years.  Piloting a new-to-the-team Summit Racing Chevrolet Camaro, Anderson reached the winner’s circle and turned the ticker on the 75th national event win of his career in the 23rd all-Summit Racing final round.

Anderson had a good vibe entering the event, debuting the red Summit Racing Camaro – a car purchased over the winter from another competitor who had put very few miles on it.  The last time Anderson brought out a new/used car, he won.  That victory, also in a red car, was 60 races ago and the most recent win on his scorecard.

“This is the second time in our career we’ve bought a used car from another racer, completely refurbished it, put a shiny paint job on it, and it’s gone right to victory circle,” said Anderson, who beat Summit Racing teammate Jason Line in the final round with a 6.538-second pass at 213.43 mph to his familiar foe’s time of 6.554 seconds, 212.96 mph.

Anderson, whose most recent win before the Gainesville victory was at the 2012 Summernationals in Englishtown had much to celebrate this weekend in Gainesville.

“It was a special day today, and a special weekend for me,” he said.  “It was pretty darnn cool because a year ago, I couldn’t even come to this race.  I was recovering from heart surgery and couldn’t even attend the race, let alone drive a racecar.  It’s been quite a year for me.  I’m a very lucky man to even be here, but I have all new parts, I’m doing great, and now I know for sure that there is no reason I can’t win.  It took awhile, but we finally got that job done today.  It’s a great day for Greg Anderson, a great day for Summit Racing, KB Racing, and everybody involved with us.”

On his way to the final – the 117th of his career – Anderson halted Larry Morgan and Shane Gray before clocking a 6.560 at 213.67 mph that would go down as top speed of the meet to put No. 1 qualifier Chris McGaha on the trailer.  The semifinals triumph over a tire-shaking McGaha set up the all-Team Summit final, the first since the race in Seattle in 2014 in which Line took the trophy home. 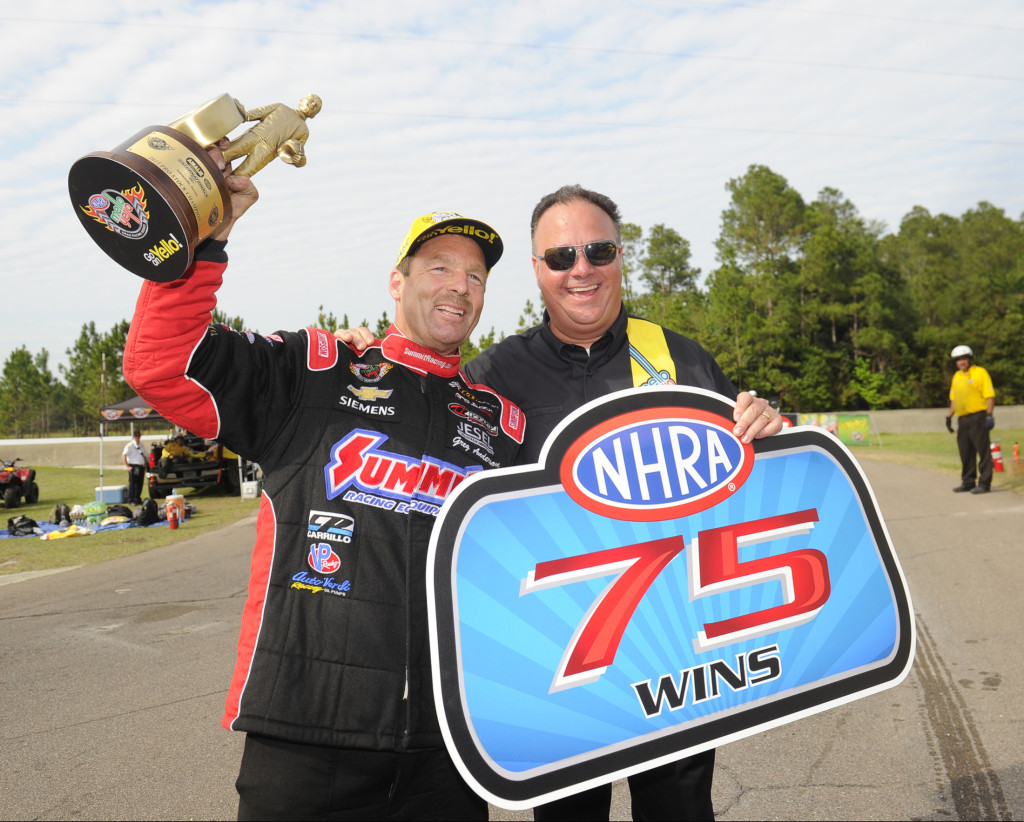 “I thought Jason would kick my butt like he normally does,” said Anderson.  “He had a faster racecar all day.  Anytime he does race me, regardless of previous rounds, he’s going to have his best light – and he did, he left on me in the final.  It feels like my first win ever.  It was a very special win for me, I just wish my wife and kids could have been here with me.  Hopefully there will be more to come, but this feels fantastic.  I really appreciate this second chance I was given.” 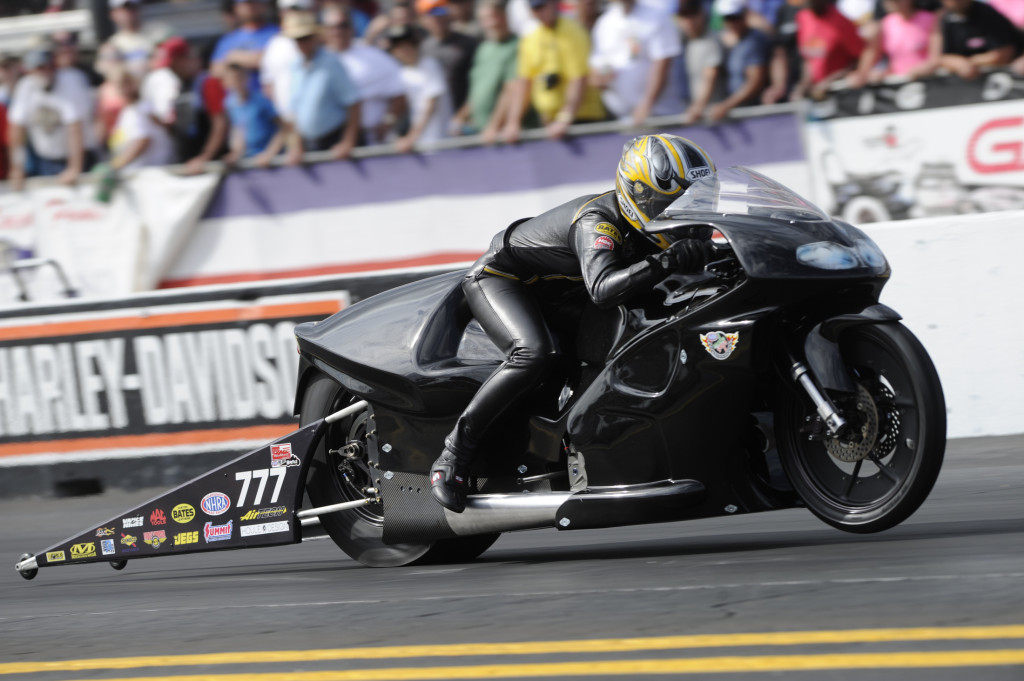 In Pro Stock Motorcycle, Karen Stoffer defeated three-time world champ Eddie Krawiec in the final with a run of 6.900 seconds at 195.11 on her Suzuki to claim her second victory at this event.  Appearing in her first race since Indianapolis in 2013, Stoffer defeated Steve Johnson, Angie Smith, and Shawn Gann moving on to the final.  The win was Stoffer’s first since Denver in 2011 and her seventh overall. 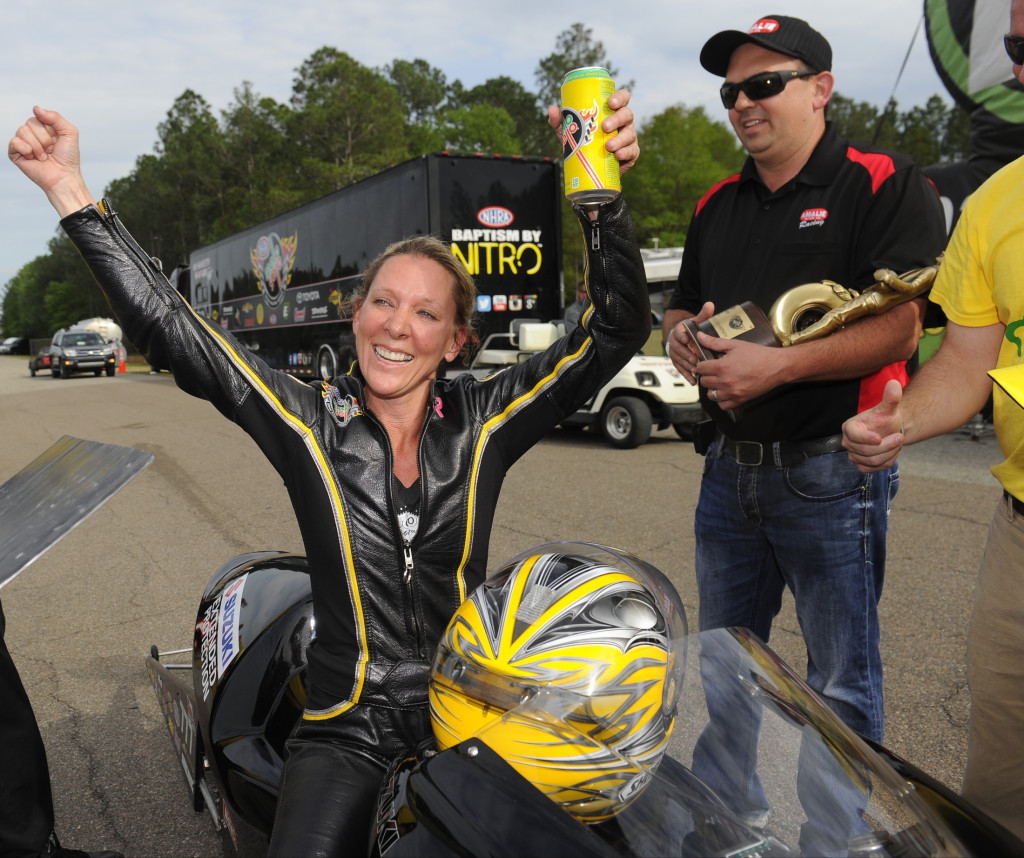 “We had a lot of heart and a lot of passion,” Stoffer said.  “We don’t have a big budget but we certainly have a big heart.  We certainly tried to get some high performance out of it and we were able to do it.  The boys worked hard, worked till about midnight each night and gave us a good bike on Sunday.”