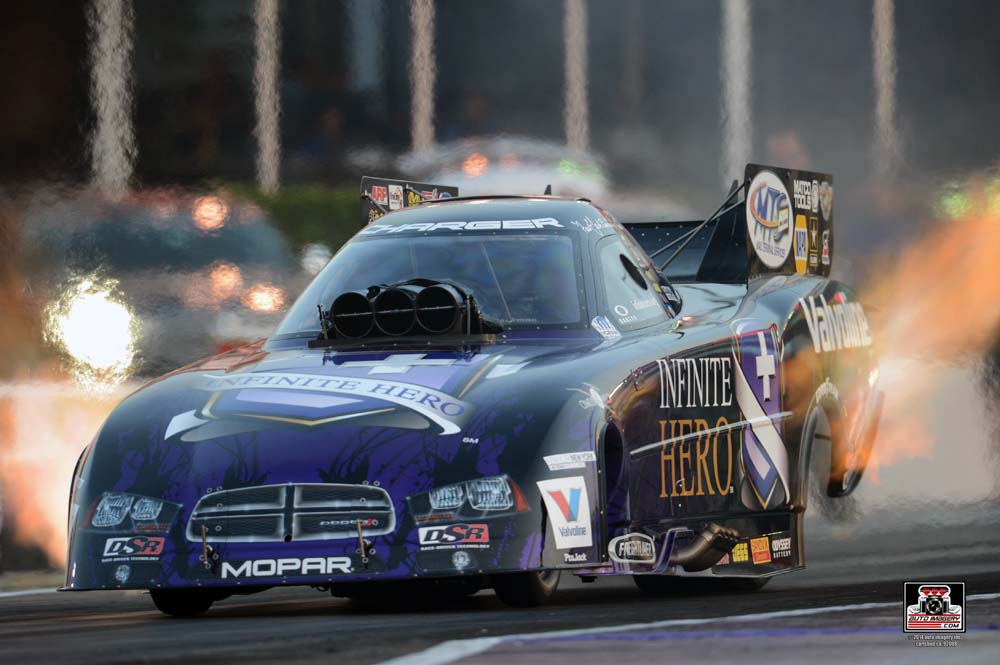 Only 20 days are left on the racing calendar before the NHRA turns on the green light for the 2015 Mello Yello season, and the PRO Winter Warm-up testing at Palm Beach International Raceway is a chance for competitors to shake off the winter blues and rev it up for 2015. Based on what we saw, it appears that the Don Schumacher Racing teams are determined to roar into the new season.

The outright leader in Top Fuel over the entire test weekend was Spencer Massey driving the Red Fuel DSR rail.  Massey obviously had a lot pent up speed building up inside him in the offseason, unleashing two runs at over 332 mph while posting an elapsed time pass of 3.723 seconds on Friday night.

“That was an awesome lap,” Massey said. “The conditions are awesome and Todd (Okuhara) said we’ll give it everything we can and it went 3.72.  I got to the finish line and hit the button for the parachutes and looked up and saw the scoreboard and saw the 332 mph come up and I was excited.

“I had no idea what it ran for ET and the guys said it ran 3.72.  That makes me so excited to have a good hot rod.  This thing has wanted to run low 3.70s since we got here and it’s like a bracket car.  This is awesome and hopefully we can continue that on into Pomona.”

Of major notice were the teams that weren’t present, namely John Force Racing and his armada of Robert Hight, Courtney Force and the 16-time champ, himself, along with his Top Fuel team driven by Brittany Force.  Pedregon Racing of driving brothers, Cruz and Tony were among some of the teams changing up their preseason testing program, but they’ll be heading to Wild Horse Pass Motorsports Park in Phoenix next weekend for another preseason session.

On Saturday, the nitro teams ran under ideal 70 degree weather stepping up the pace and again it was DSR showing the way.

Massey drove his DSR dragster to a time of 3.741 seconds along with another matching booming speed 332.01 mph.  Alongside him on that rocket run was teammate, Antron Brown, putting on a great show racing side-by-side and recording a time of 3.772 seconds, 321.50 mph.  Doug Kalitta and Larry Dixon posted 3.78s and rookie candidate, Dave Connolly is still improving his learning curve running a 3.81 on Saturday, but had gone quicker earlier in the week with a time of 3.79 seconds.

On Saturday, the last day of testing, Funny Car fans at PRIR were treated to even quicker times.  After Ron Capps led testing last year and appeared from Friday’s results to be heading that way again was outgunned by DSR teammate, Jack Beckman, now being tuned by Jimmy Prock, John Medlen, and Chris Cunningham.

They logged the quickest Funny Car lap of the two-day show with laps of 4.003 and 4.031-seconds to conclude the PRO portion of the teams five days of preseason testing.

“The car has been telling us that it’s too powerful,” Beckman said after the completion of testing in Jupiter, Fla.  “We made a lot of changes this off season and you think you found the ceiling for horsepower and Jimmy Prock took it to a different level and it was just too wicked up here.  We kept backing it down a little bit and it needed to be backed down a bunch and we backed it down to a four flat at 321 (mph).  I’m pretty jazzed about Pomona.”

Beckman’s optimism grows as he hopes to break his winless streak that dates back to Gateway Motorsports Park in Sept. 2012 or 51 NHRA races since seeing the winner’s circle.  Needless to say, the two-time NHRA world champion is keen on adding a 16th career Funny Car win to his resume and preferably early in the 2015 NHRA Mello Yello Drag Racing Series season.

“Had we left here without making any representative runs, I’d still feel optimistic because I feel that we have good numbers from last year.  We just apply the changes and go to Pomona,” Beckman added.  “Now I feel wonderful about our chances.  A few good laps make us feel all the extra effort was well worth it.”

Chad Head raised a few eyebrows when he laid down an impressive 4.05 ET in the Head Family Toyota, but that came after some bugs and tire smoking instances.

Tommy Johnson, Jr. seemed to struggle all weekend and never did make a complete pass on the last two days of testing.  His Make-A-Wish team tried different engine combinations and tested parts.  As one of the cars under the DSR wing, it’s surely capable of matching his teammates in performance and capable of being a championship contender.

Next weekend additional teams will be testing in Phoenix and then two weeks later, the kick-off of the NHRA season at the Circle K Winternationals on Feb. 5 – 8, at the Auto Club Raceway at Pomona.