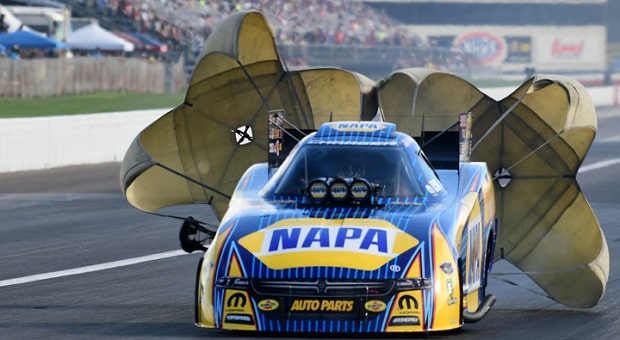 It’s official: NAPA Auto Parts and Ron Capps will be racing together again, searching for their second NHRA Mello Yello Funny Car championship together after securing their first in 2016. Don Schumacher Racing announced the multi-year extension right before Christmas – that’s quite a gift – for the auto parts distributor and their driver.

“We’re enjoyed an 11-year partnership with NAPA and are thrilled to be able to announce that relationship will continue into 2019 and beyond,” said Don Schumacher, team owner. “The longevity of our relationship speaks volumes, and we look forward to many more wins, championships and years representing NAPA Auto Parts.”

NAPA first joined DSR as an associate sponsor in 2007 and became primary sponsor for Capps’ Dodge Funny Car the following year. Over the past 11 years, the affiliation has yielded 36 national race wins, 15 No. 1 qualifiers and that 2016 title, Capps’ first in the category. NAPA Auto Parts will be Capps’ primary sponsor for the term of this agreement; the company customarily marks its partnership in three-year increments.

“It’s been an honor to represent the thousands of NAPA Auto Parts stores and NAPA AutoCare Center owners, employees and customers for the last decade, both on and off the track,” Capps proclaimed. “Our race fans are as passionate as they come, and I’m elated about our future with NAPA and our continued goal to be number one.”

Capps will begin his 25th year as a pro in NHRA competition, his 15th season with Don Schumacher Racing and 12th with NAPA Auto Parts on his racecar, when the season begins February 8-10. The NHRA Winternationals at Pomona will see the popular Californian driving a 2019 Dodge Charger SRT Hellcat, which was designed with input from the driver for the first time.

Capps has, since his early days in partnership with the NAPA brand, appeared in the company’s national ad campaigns, helped launch new products and promotional programs, as well as helped to develop relationships with NAPA customers, store owners and personnel throughout the country, using in-market activation programs at each NHRA tour stop.

The ongoing NAPA partnership with Capps and DSR includes a business-to-business hospitality aspect, which recognizes a NAPA customer as an honorary crew member at every NHRA race. It’s likely for that reason that “NAPA is pleased to continue its primary partnership of Ron Capps and Don Schumacher Racing,” said Dan Askey, NAPA president. “Partnership is the key word, as Ron, the team and the entire DSR organization are true partners, both on and off the track.

”We could not be more pleased to have them represent our brand to the many loyal NHRA fans across the country,” Askey continued. “Certainly, we want to thank the fans for their continued support of NHRA and NAPA, and we look forward to 2019 and beyond.”

A 60-time Funny Car winner, Capps is ranked second all-time, behind John Force, who has amassed 149 total victories. Capps collected three Wally winner’s NHRA trophies and one pole (in the season finale at Pomona) during the 2018 season. He earned fourth place in the 2018 Countdown to the Championship six-race playoffs that decides season standings. The NAPA Auto Parts Dodge Charger Hellcat is, once again, helmed by championship crew chief Rahn Tobler and assistant crew chief Dustin Heim for the 2019 season.