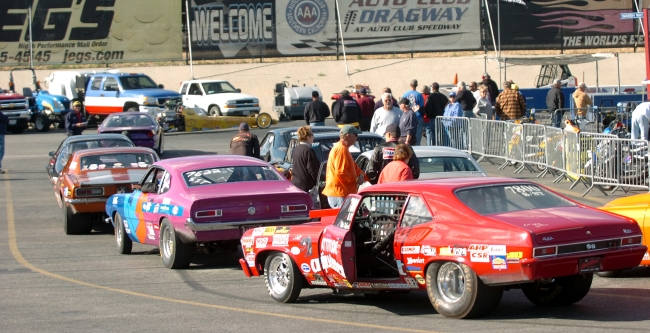 The Auto Club Speedway located in Fontana, California is on track to make a long awaited return to drag racing in 2014!

What was once touted as Southern California’s home for drag racing, the Auto Club Speedway’s drag strip had been the center of dispute for four years due to noise complaints from neighboring communities, resulting in a court-ordered suspension of operations in early 2012. Thankfully, a settlement was reached later that year that called for a sound wall to be constructed on the northern boundary of the Auto Club Speedway; a feat that has been estimated to cost around $1 million.

With the sound wall design complete and construction beginning as early as October 2013, Southern California drag racers are eagerly anticipating the 2014 Auto Club Dragway schedule, which in the past has included NHRA Street Legal programs as well as NHRA Lucas Oil Sportsmen events.

The unrelenting dedication from Auto Club of Southern California sponsors NHRA, SEMA and K&N Filters was instrumental in affecting the decision to return to drag racing.

“We are truly recognizing that with our oval, road course and other activities, we’ve got everything going,” said ACS president Gillian Zucker. “We didn’t feel we could truly be a motorsports complex if we didn’t have straight-line racing. We plan to return to NHRA racing in 2014.”

Here’s to hoping the sound wall works as intended, especially with rumors flying about the closure of the 1/8th mile drag strip at Irwindale after 2014.