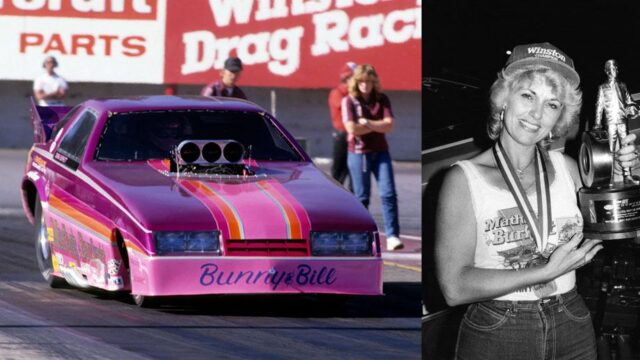 Female Drag Racing legend Carol “Bunny” Burkett, passed away over the weekend due to natural causes; she was 74 years old.

Burkett, who was once a hostess at the Playboy club in Baltimore, hence the nickname, began racing in the ’60’s with her brand new ’64-1/2 Mustang. She later upgraded to a ’67 that she raced in the Sportsman ranks. In the early ’70s, Burkett kept it Ford with her Lil Cotton Bunny Pinto racing in Pro Stock and eventually Top Alcohol towards the late 70s.

Her outgoing persona along with her entertaining reading style led her to be a fan favorite at almost every race. One of her biggest wins was her Top Alcohol Funny Car victory at the NHRA Keystone Nationals at Maple Grove Dragway in 1986, which at that time, made her the first and only woman ever to win a NHRA national event Funny Car title, an accomplishment that stood for two decades.

Burkett won many awards for her 55 years of drag racing competition and was most recently named as a Lifetime Achievement recipient for the 2020 Holley National Hot Rod Reunion, where she will be honored posthumously.