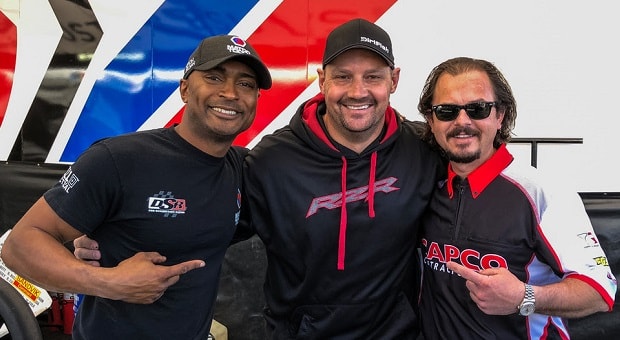 “Each 130-mile loop is probably further than Antron or Steve have drag raced in all of their combined years!” joked Beaver. Brown and Torrence are both perfect for the Star Car, as they started their respective racing careers on motocross tracks.

“It only took me about three seconds to accept Jim’s offer to race in the Mint 400,” Brown quipped. He’s used to making 1000-foot drag strip passes at 325 mph or more in under three seconds.  Eloquent and charismatic as well as lightning fast, Brown has also hosted BBC’s Top Gear America alongside Tom Ford and William Fichtner. His humility and determination make it easy to root for him, whether he’s tearing down the drag strip or racing through the desert.

Since 2012, Steve Torrence has run his own NHRA Top Fuel team, and has celebrated in the winners’ circle twelve times over just the last two seasons. This past weekend he set a career best, running 333 mph for an elapsed time of 3.655 seconds in qualifying on his way to claiming the Wally at the NHRA Arizona Nationals. Torrence’s latest victory put him at the top of the points standings in the second event of the premier Mello Yello series.

Torrence’s promising future in racing was delayed in 2000 when he was diagnosed with Hodgkin’s lymphoma. He spent months in the hospital, battling through both chemotherapy and radiation treatments, and was eventually able to overcome the disease. Ever since then, he hasn’t wasted a day – he demonstrates an unmatched work ethic with long hours at family-owned pipeline construction and maintenance business Capco Contractors during the week, which funds his top tier drag race program on the weekends.

The Mint 400 desert race is the biggest off-road race in the USA. More than 400 vehicles take part in the event, speeding over the sand before over 50,000 fans. The Mint 400 runs Wednesday March 7 through Sunday March 11 in Las Vegas and includes the Miss Mint contest, the Pit Crew Challenge, the Polaris RZR S Turbo Launch Party and a fleet of race vehicles driving down the Las Vegas strip prior to the race. Competition in the UTV classes is intense; over 100 UTVs compete in the four fastest growing classes in desert racing.