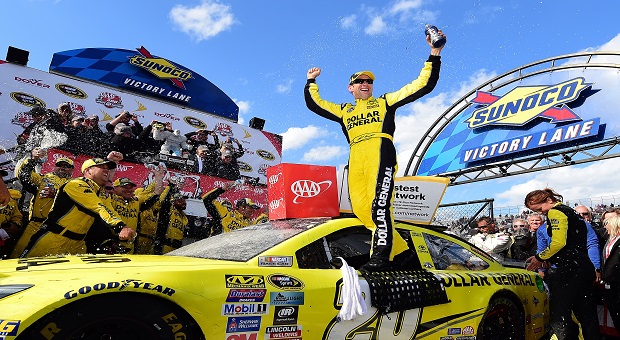 The NASCAR weekend at the Dover International Speedway Weekend had a high attrition rate with ‘Miles the Monster’ taking a hefty bite out of the competition in all three of NASCAR classes. Dodging rain showers on Friday and Saturday gave way to a beautiful, sunny race day, but cool by May standards with temperatures in the 50s. 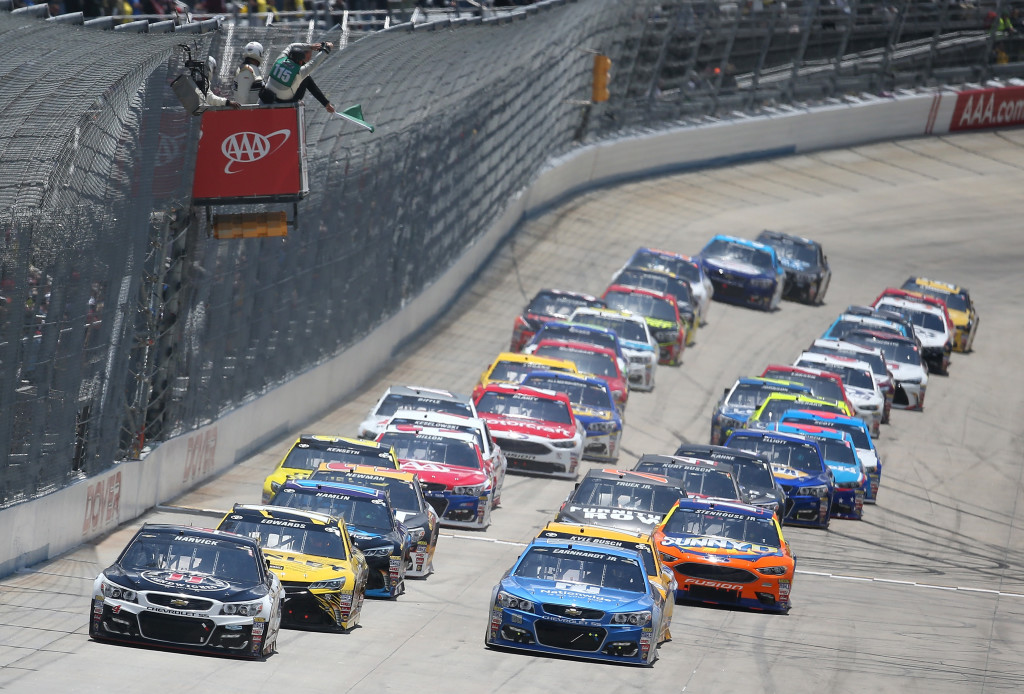 Matt Kenseth must have felt like fresh bait in front of two young sharks snapping at his heels after winning the AAA 400 Drive of Autism at Dover in getting his first win of the season and 37th of his career along with his year-end invitation into the NASCAR Sprint Cup Chase. Right behind Kenseth at the finish was Kyle Larson and in hot pursuit was Chase Elliott.

The two young guns battled Kenseth for the lead in the final 35 laps with first Larson making a charge. Then Elliott went low to get to second and tried twice to make a pass. Then Larson came back to pass Elliott and just barely missed his chance to get by Kenseth by .187-of a second. It was close, with Larson diving low and Kenseth’s high groove had the speed and the ability to keep Larson frustrated and behind him.

If the all-concrete Monster Mile’s reputation was destroying race cars, it certainly earned it, taking out 18 cars in a major pileup with 46 laps to go. The accordion-style crash started in turn one and didn’t stop for next 15 seconds, sending notable cars of Kevin Harvick, Kyle Busch, Joey Logano, Jimmie Johnson, and frontrunner, Martin Truex, Jr. Jimmie Johnson, at the time running second, couldn’t shift gears on the restart, causing the major melee behind him. 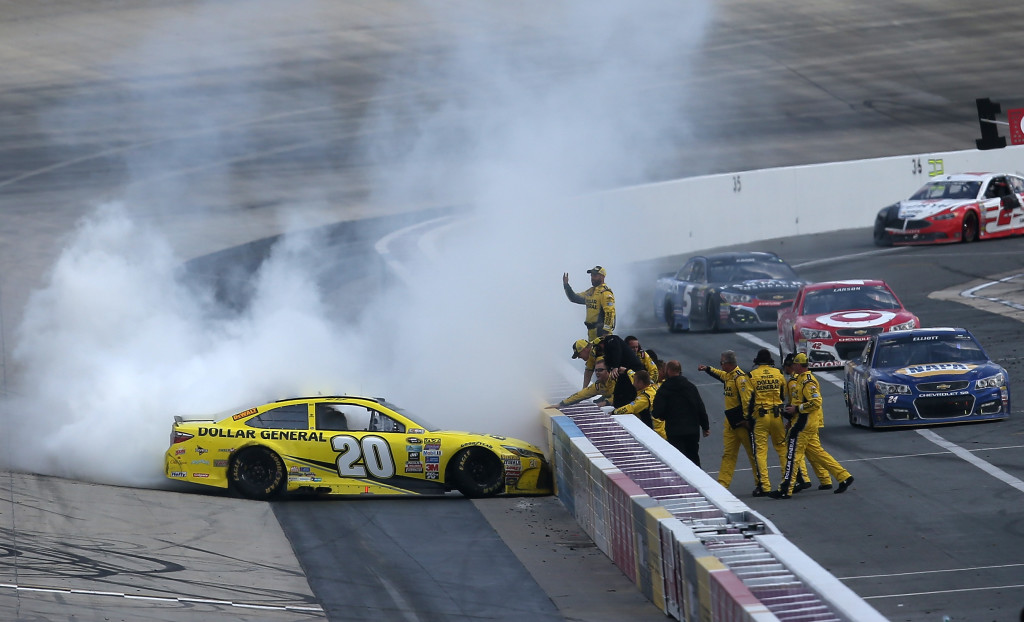 The weekend started pretty rough for Stewart-Haas Racing, wrecking the cars of Danica Patrick and Tony Stewart after breaking the rear end gearing spilling differential oil all the way down the front stretch. Jamie McMurray slammed the outside turn four wall but was able to come to a stop. Stewart, nursing a back injury, slammed into both walls resting near the start/finish line wondering what had happened. What made the accident memorable was the vast amount of flames shooting out from under Patrick’s car that turned her Nature’s Bakery Chevy unfortunately into toast.

Another outstanding fact after Dover is Joe Gibbs racing has won the last five of last six races and seven of the last 12 events of 2016. That now puts the Gibbs organization into of tie with Roush Fenway Racing for third with their 135th team victory. 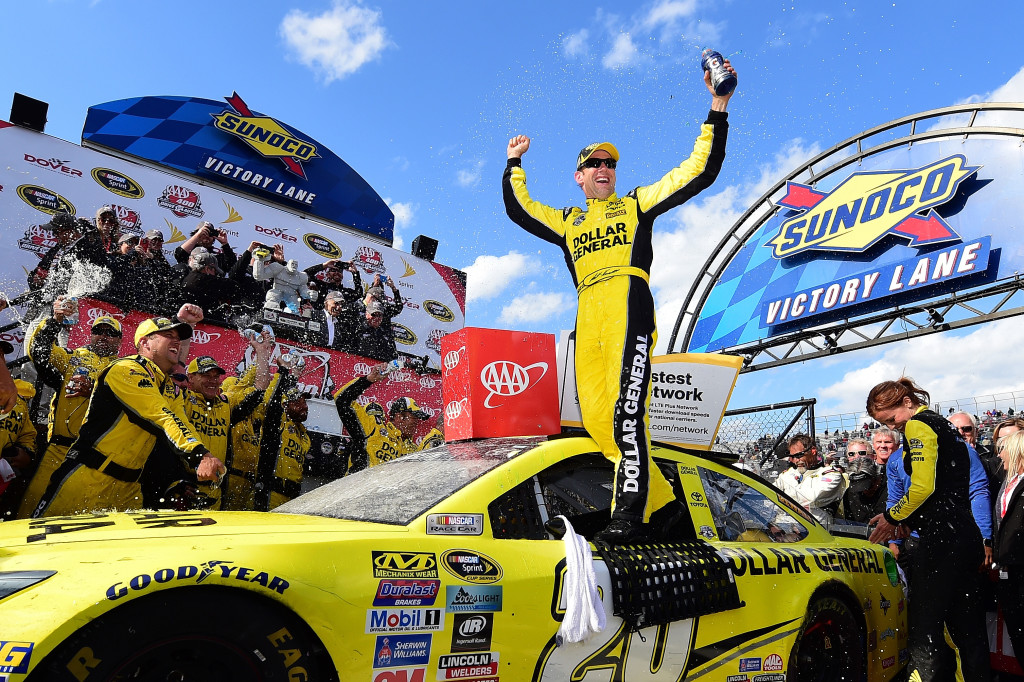 It appeared Carl Edwards would have something to say with the outcome, but with 41 laps to go when exited turn two in a loose condition, Larson was there sending him into backstretch wall ending his day in a very hard collision.  Again Martin Truex, Jr. showed signs of brilliance, finding himself in the lead at different points leading for a total of 47 laps before damaging his nose on his Toyota in the Dover ‘Big One’ of 18 cars ramming the back of Jimmie Johnson. It wasn’t anywhere near the 117 circuits that Kevin Harvick used at the beginning of the race to lead the most, but he did have the best line of the weekend. “My luck is so bad; I could break the car ahead of me.” 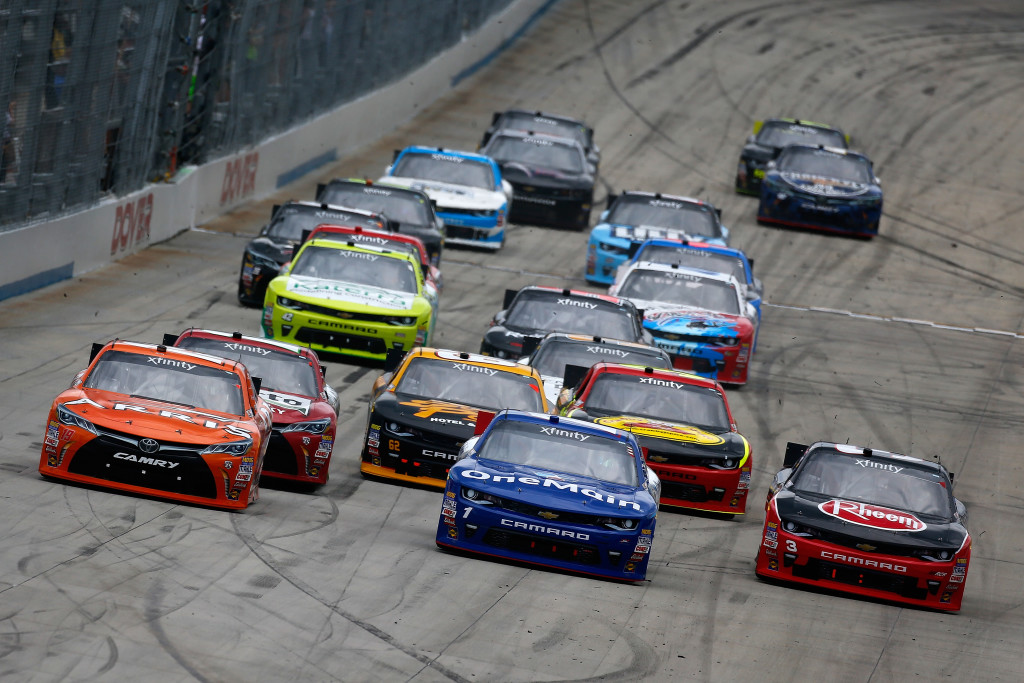 Erik Jones won his second NASCAR Xfinity Dash 4 Cash race this season on Saturday, beating Darrell ‘Bubba’ Wallace by 1.434 seconds, but not before, he had to sweat it out wondering if staying out for track position would be profitable, as in what’s another $100,000 check worth!

His five-lap sprint to the finish when the green waved after a late race caution solidly secured his place in victory lane in the Ollie’s Bargain Outlet 200 at Dover International Speedway.  Strong runners, Alex Bowman and Elliott Sadler running second and third, respectively, pulled in for fresh rubber leaving fourth and fifth place drivers, Justin Allgiaer and Joey Logano to move up, cutting off their strategy with the rest of field falling in line to add to the distance.  Wallace, starting fourth, shoved Jones to the front on the restart and it was just enough clearance for him to keep pace with Jones and move into second.

Bubba Wallace had a rough start to his Dover weekend, sliding into turn three in the first five minutes in Friday morning’s practice, wrecking his primary car delaying his progress. Rallying back in the race to the runner up spot, a career best, is something special to him after a major setback.  The first car on fresh tires was the No. 88 Alex Bowman finishing third. It’s his first race for JR Motorsports of nine scheduled for him this season and his first race in seven months returning with a career best result. 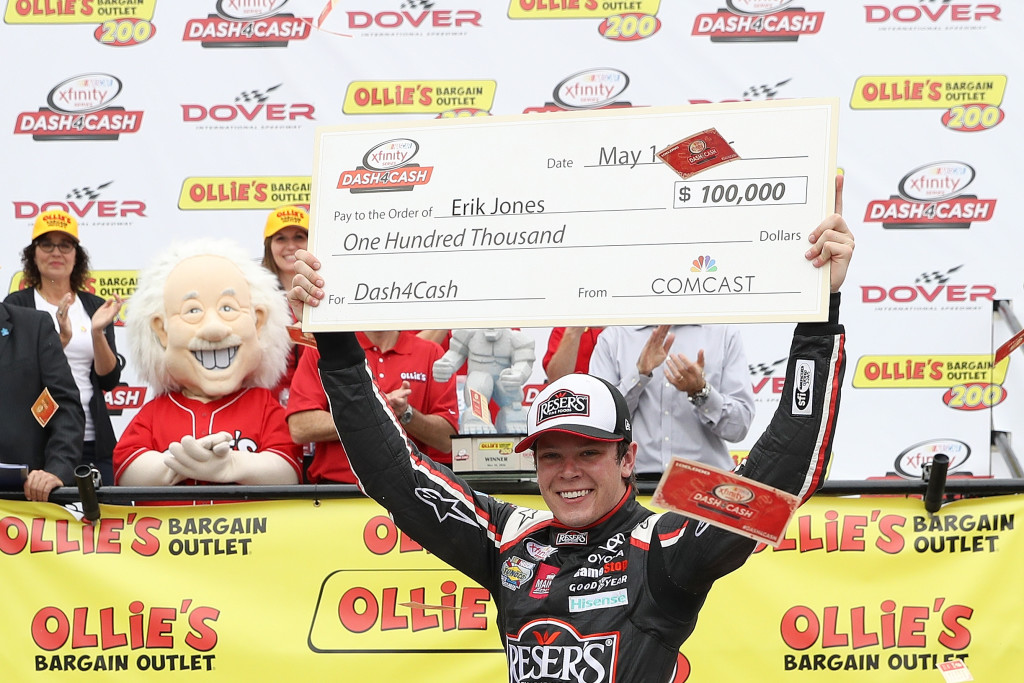 The four contenders and highest finishing Xfinity drivers as the Dash 4 Cash qualifiers were winner, Jones, Allgaier, Ty Dillon, and Daniel Suarez with only Dillon beside Jones cashing in as the only other driver to win the Dash 4 Cash money at Bristol earlier this season for his big payday.  The Xfinity series takes next weekend off coming back on Memorial Day Saturday at the Charlotte Motor Speedway for the Hisense 300. 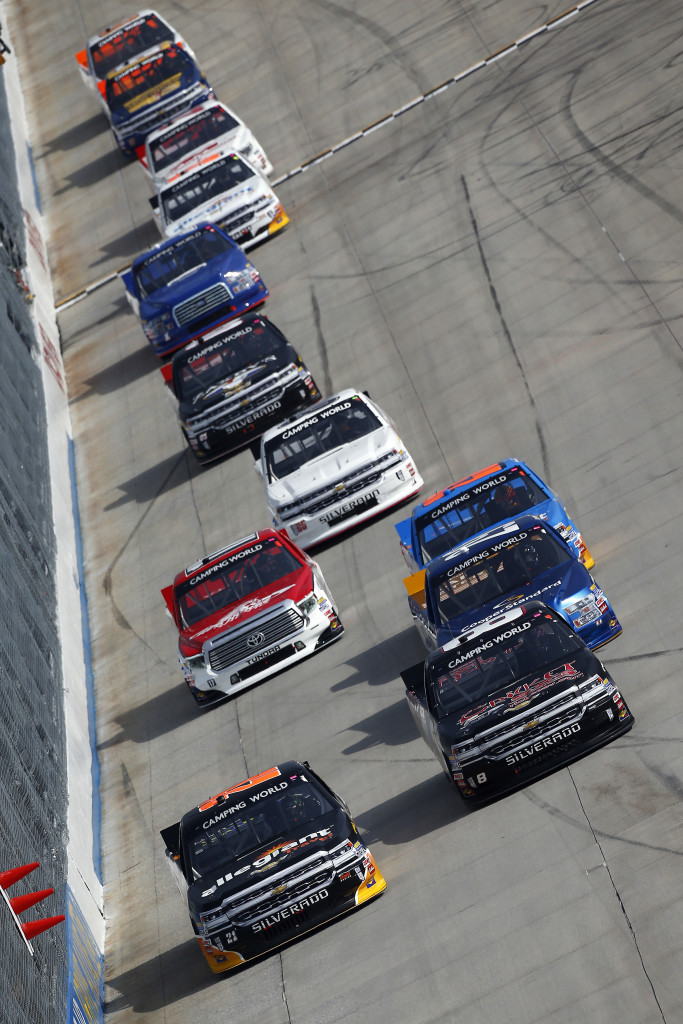 Matt Crafton finally joined his compatriots in the NASCAR Camping World Truck series Chase of 8 in getting his first win at Dover in the JACOBS Companies 200 and first of the 2016 season. He was dogged by Daniel Suarez the final 27 green flag laps in a truck he considered undriveable in the last practice being in 21st on the sheet, but with just the right adjustments in air pressure made all the difference, giving Crafton his first ‘Miles the Monster’ one of a kind trophy.

The two-time series champ, Crafton earned his 12th career win and first since Homestead last year. It was only after a long conversation about the condition of his truck with crew chief, Junior Joiner and then a later one to talk about what they were going to do on race day. It may have not started as the quickest vehicle, but he was fast enough when it counted, but it wasn’t an easy road for him.

Suarez locked in on his opponent’s bumper, receiving a great education following Crafton. As hard as he tried and to he could get close, but either his truck would swerve or he would rally and over charge the turn and drift high. The longer Suarez runs up front clearly shows it won’t be very long before we’ll see him in victory lane producing his fourth second place finish in his young career on Saturday. Although his race vehicle failed post race inspection for being too high, officials will assess those penalties on Wednesday. 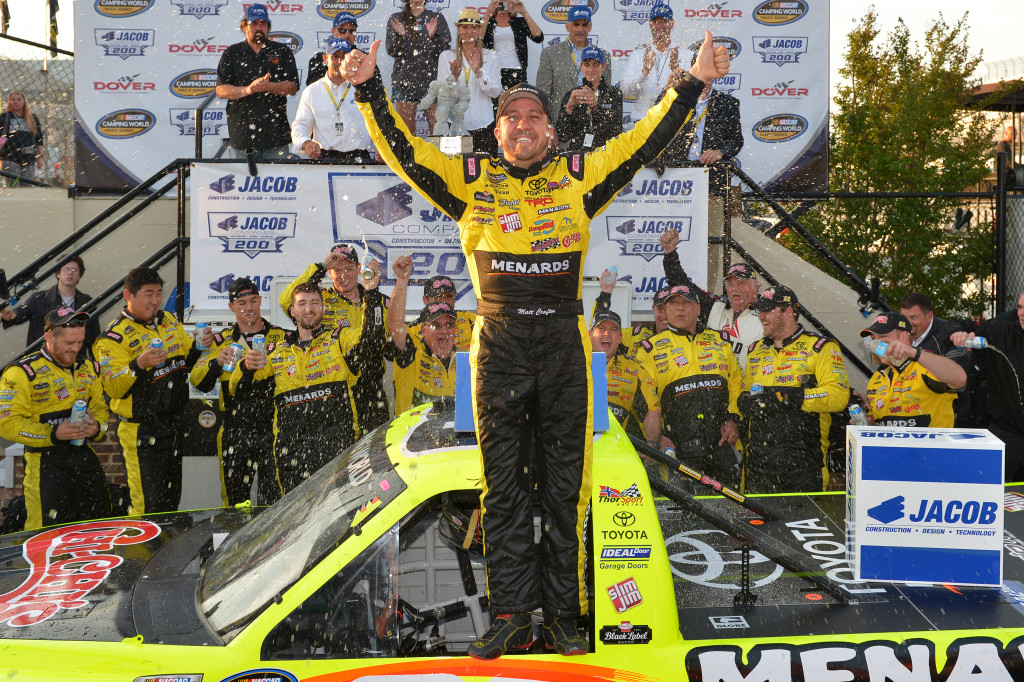 At the beginning of the race, it looked like lightning was going to strike twice with last week’s first time Truck winner, William Byron dominating the initial part of the race, leading a race high 80 circuits. The pole-sitter, Byron slipped to 11th in the final laps after losing his handling package.  Cole Custer was a major player in the beginning, but was called in by NASCAR officials for jumping the restart. He returned from the rear up to end up fifth.